With their religion front and center, progressive Latter-day Saints are becoming bolder about speaking out 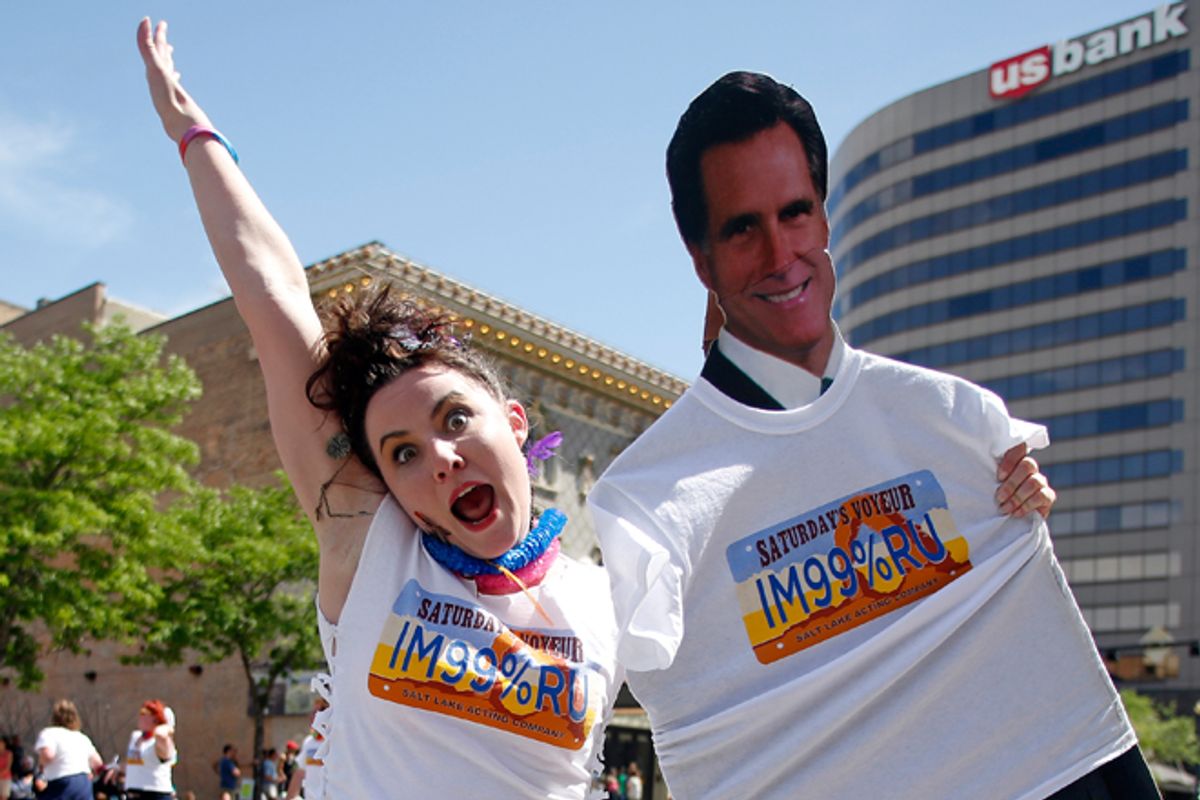 Mitt Romney’s presidential campaign has the nation talking about Mormonism. You can’t scan a newsfeed without being bombarded by several stories of gay Mormons, black Mormons, doubting Mormons, ex-Mormons – you name it. There are Mormons available in every genre imaginable. Not surprisingly, what perks the interest — and at times incredulity — of outside observers is the persistence of liberal and progressive Latter-day Saints.

Mormons are everywhere, but what may be less obvious is the extent to which this so-called Mormon Moment is actually exposing the internal stresses and fractures that have long existed within the faith. In November, Romney’s campaign may determine the direction of our nation, but it has already launched the battle for the soul of Mormonism in the early 21st century.

For more than five decades, Elder Boyd K. Packer has been an intimidating presence within the leadership of the Church. As president of the senior Quorum of the Twelve Apostles, his deep, gravel voice and hardline commitment to 1950s social conventions has been a divisive force within Mormon congregations – separating, as it were, the goats from the sheep. Or perhaps more aptly, the liberals from the conservatives.

In 1993, Packer pronounced what he saw as the three great threats to the Latter-day Saints: “The dangers I speak of come from the gay-lesbian movement, the feminist movement and the ever-present challenge from the so-called scholars or intellectuals.” He darkly cautioned that some members might “become their advocates -- sympathize with their complaints against the Church, and perhaps even soften the commandments to comfort them.”

Packer’s bark was quickly followed by his bite. He subsequently oversaw the high-profile excommunication of six members whom he considered the very embodiment of such danger.

Flash forward nearly two decades into the Mormon Moment 2012. Packer’s Google Alerts must only inflame his horror: “Gay Mormons Challenge the Church,” “The Rise of the Mormon Feminist Housewife,” “Mormons Who Love Obama.” Lo, the end is nigh.

Despite his warnings, gays, feminists and scholars are now becoming the voice of Mormonism — at least the kind of Mormonism that mainstream America is most interested in discovering.

Twenty years ago, John Dehlin might have been on Packer’s hit list. He is the creator of the popular Mormon Stories podcast, a secularly based online discussion of Mormonism. The site regularly features long-form interviews with people both inside and outside the faith. Dehlin is enjoying the ride.

“In the history of the modern LDS church, there has never been a better time to be a progressive Mormon,” he says. “The Internet -- combined with the church's passion for positive PR and the intense media exposure of the Romney moment -- have combined to create a perfect storm of protection -- almost a safe haven -- for progressive Mormons to speak without fear of reprisal.”

His site has become a space where Mormons of all varieties can share their doubts and struggles.

Dehlin is currently at the center of a new controversy at Brigham Young University’s Institute for Religious Scholarship, which publishes the apologist-oriented Mormon Studies Review. The Salt Lake Tribune recently reported that longtime editor and defender of the faith Daniel Peterson was fired, in part, because the Review planned to publish a 100-page take-down of Dehlin. Reports suggest that the attack caught the attention of a high-ranking Church authority who demanded the piece be pulled, followed by Peterson’s quick firing.

For two decades, Peterson was a prominent face of Mormon apologetics. He was a man after Packer’s own heart. His academic approach was often adversarial, ad hominem attacks toward any Mormon scholar he perceived a threat. Peterson’s removal suggests to some that the LDS Church may be moving away from its traditional defensive posture and possibly toward a more open form of LDS scholarship.

Although Dehlin is cautiously optimistic about what he sees going on around him, his own work has not gone completely unscathed.

“Unfortunately I have been disciplined by my bishop -- and have been told that I will not be allowed to baptize my son (who recently turned eight) because of the podcast -- so we're not out of the woods yet.”

It hurts. But Dehlin shrugs off the controversy.

“Church leaders likely see both Peterson and myself as bad for PR. And next to the temple, maybe, I believe that PR is perhaps the most sacred thing to church leadership.”

The Dehlin case demonstrates a Church strangely at odds with itself. One leader enforces punitive disciplinary measures, while another jumps in to protect his honor. To an outside observer, this may appear schizophrenic, but to the insider it reveals a Church grappling with modernity, desperately trying to move toward something new while still struggling through the entrenched biases of the past.

And nowhere are these odd fractures more evident than with LGBT Mormons. Within the Church-owned Deseret News, the splintered approach to LGBT issues is evidenced through two recent competing editorials. On June 9, the editorial board opined “Family Structure Counts” and reasserted their position that same-sex parenting is inferior to biological heterosexual parenting.

Three days later, another editorial read, “End the Abuse for LGBT Teens in Utah,” asserting matter-of-factly (and without acknowledging any irony whatsoever), “one must assume that, aside from perhaps some youthful lack of judgment, the incidents of taunting or bullying in Utah are, to at least some degree, a reflection of attitudes found within some of the homes where the bullies live.”

In many Mormon homes however, those attitudes are changing.

Erika Munson is a typical Latter-day Saint. She is a mother of five whose husband sings in the Tabernacle Choir. In early June, she made international headlines by forming Mormons Building Bridges and marching in the front of the Utah Pride Parade with 300 of her fellow Saints.

When Munson met with LGBT organizers, she told them simply, “I love the gay community because of who you are, not in spite of who you are.” Munson’s words were an evolution in contemporary Mormon thought that was now ready to distance itself from the condescending rhetoric of “hate the sin, love the sinner.”

On the day of the march, the Mormons and grand marshal Dustin Lance Black were met by thousands of cheering Utah gays. It was a symbolic shift within LDS-LGBT relations.

Now visible all over both the local and national media, the true test for Munson and the MBB contingent would occur when they all returned to Church the following week.

“Out of the hundreds of stories I have heard, only two marchers said their bishop called them in to ask about their testimonies.” Munson reports, “They explained to him why they marched and have had no further recriminations. The following Sunday exactly two people came up to me and whispered ‘thank you.’ I don’t think the others Church members knew what to think!”

Munson and her friends are marching Mormonism into the future. “The steps we took in the parade were the beginning. I may not be able to see the distant scene, but I have faith that it is a wonderful, inclusive place.”

When the dust settles and Romney’s final electoral fate is decided, we may look back at the Mormon Moment as a time when progressive Mormons truly found their voice and their place within the Church. Historians may determine that it was not actually Romney who pulled Mormonism into the mainstream -- but rather the very people Boyd Packer once viewed as their greatest threat – those troublesome intellectuals, feminists and gays.

The prophets of social change.