It's the Silicon Power Armor A80 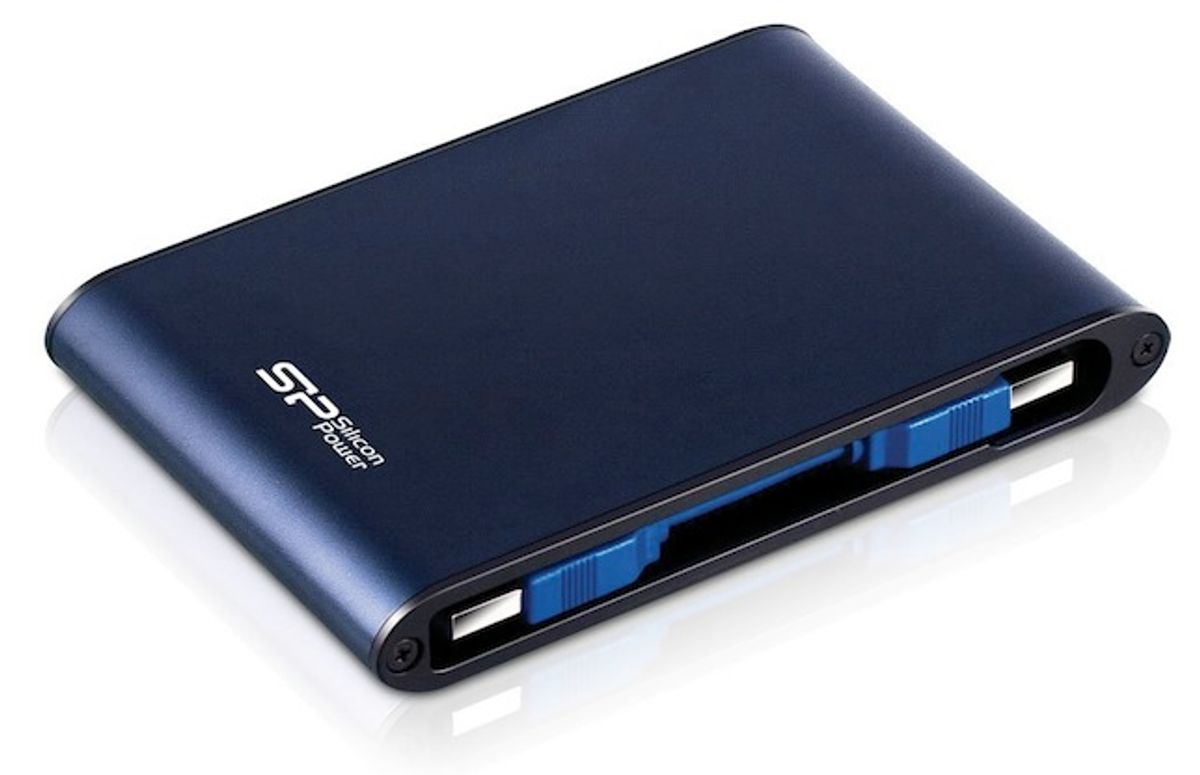 The Silicon Power Armor A80 is our pick for best portable hard drive because it has a rugged metal body and a fast USB 3.0 connection.

Portable hard drives are the most vulnerable of all digital storage options. They're always being tossed around despite containing sensitive moving parts unlike a memory card or thumbdrive. That's why after six hours of research and reading as many reviews as we could get our hands on, we're recommending one that's shock resistant and waterproof on top of being super fast.

$99 is a pretty typical price tag for a bus-powered, 750GB USB 3.0 drive, but what you don't expect in this price range is an anodized aluminum enclosure that meets US military specifications for water resistance under 3 feet of liquid for 30 minutes and shock resistance for falls from as high as 4 feet. Silicon Power also offers a generous 3 year warranty (Seagate and Western Digital both only offer 2 years of coverage). Another nice touch is a miniature USB cable that fits right into the casing. This way you won't ever leave home without a cable.

Despite containing a slower spinning 5400 RPM drive, CNet's benchmark tests show that the A80 has close to class leading performance thanks to its zippy USB 3.0 connection. Its respective read and write speeds of 102.7 MBps and 87.8 MBps were on par with those of faster 7400 RPM offerings such as the Hitachi Touro (103.5MBps read, 86.2MBps write). Benchmarks from TweakTown and UMLAN confirmed the drive's speedy performance. TweakTown even went and swapped the existing Samsung hard drive with a 256GB Crucial SSD they had on hand to test the limits of the USB 3.0 connection. Their frankendrive achieved staggering 200MBps read and 183MBps write speeds. Tinkerers take note.

Although reviews were a bit difficult to come by (Silicon Power is not exactly a major player in the tech industry), reviewers who did see the drive were unanimously impressed by its toughness and performance. CNet gave it 4/5 stars, and lesser known tech review sites TweakTown and UMLAN gave it 88% and 9/10 respectively.

As for its competitors, they're weak, literally. None of the other USB 3.0 drives in this price range can match its combination of storage capacity, shock resistance, water resistance. For a bit more cash, the $141 1TB Buffalo Ministation Extreme (a Laptop Magazine Editor's Choice) offers shock protection (and a bit more storage). It's rated to withstand drops of up to 2 meters (6.5 feet), almost 40% higher than the A80, which is impressive, but when you think about it, how often are you using desk that's over 6 feet tall? Its non-removable, built-in USB cable is also cause for concern should it somehow break and render the drive useless. Besides, if you really need the extra storage space, the 1TB A80 only costs $135, we just didn't think the extra 250GB was worth an additional $36.

If 750GB just won't cut it for you and you're willing to spend a bit more cash, we recommend the $181 LaCie Rugged 1.5 TB. Although it's not waterproof, it is "rain-resistant," which is probably good enough for most day to day accidents. Windows users will also appreciate the ability to set up scheduled backups through the bundled Memeo Backup Premium software. It's not quite as fast as other USB 3.0 drives, but LaCie has a good track record for build quality, which we think is worth the slight hit in performance.

If even 1.5TB isn't enough, you're left with only one choice: the 2TB Western Digital My Passport Portable. It's not shockproof or waterproof and at $197, it is not cheap, but if you want a bus-powered drive with that much storage, it's your only option. Reviewers praise it for its massive storage capacity and speedy performance, which landed it an Editor's Choice award from both CNet and StorageReview.com. A word of warning though, a previous version of this drive had an abnormally high percentage of 1-star reviews on Amazon complaining of a bug that causes it to stop working out of the blue with no signs of mechanical failure. Not exactly confidence inspiring.

Finally, for the security-minded crowd who truly need the added protection afforded by features such as a built in PIN pad. For you, we recommend the PC Magazine editor's choice Lenovo Thinkpad Secure 750GB. $200 is a lot to pay for a 750GB drive, but if you are dealing with a lot of sensitive information, it's better to pay upfront than to deal with the costs of losing valuable intelligence.

Some reviewers complained about the Armor A80's above average size and heft (5.5 x 3.7 x 0.7 inches; 9.6 ounces), but all that shockproofing needs to go somewhere. But truth be told, it's actually about the same size as some other more popular drives like the 1TB Seagate GoFlex (5.3 x 3.5 x 0.9 inches ; 9.9 ounces). In either case, a few extra ounces and a couple cubic inches of extra bag space is a small price to pay for peace of mind. It's also not the fastest drive you can buy––that title belongs somewhere amongst the handful of high-end Thunderbolt devices, but those are prohibitively expensive for most people at this time.

In the end, the Armor A80 may not be the fastest drive (however, the fact that it's fast certainly doesn't hurt it), it's also far from cheap and not even close to having the most capacity, but it was designed to take whatever life throws at it in stride and come out swinging on the other end. And when it comes to portable hard drives, that's what really matters. True portability means being able to take it on trips without having to worry if it will survive them. Leave the backups of backups to the desktop drive at home. After all, it's better to have 750GB you can depend on than 2TB that's just one spill or tumble away from the landfill.

*In the end, even the toughest of drives will wear out. That's why we also recommend that anyone and everyone gets an online storage plan like Crashplan for $3 a month to backup all your data to the internet automatically, too.