Bankers constantly lying, defrauding; most still not in jail

Barclays, JPMorgan and the rest of the megabanks reach new heights in malfeasance, suffer few consequences 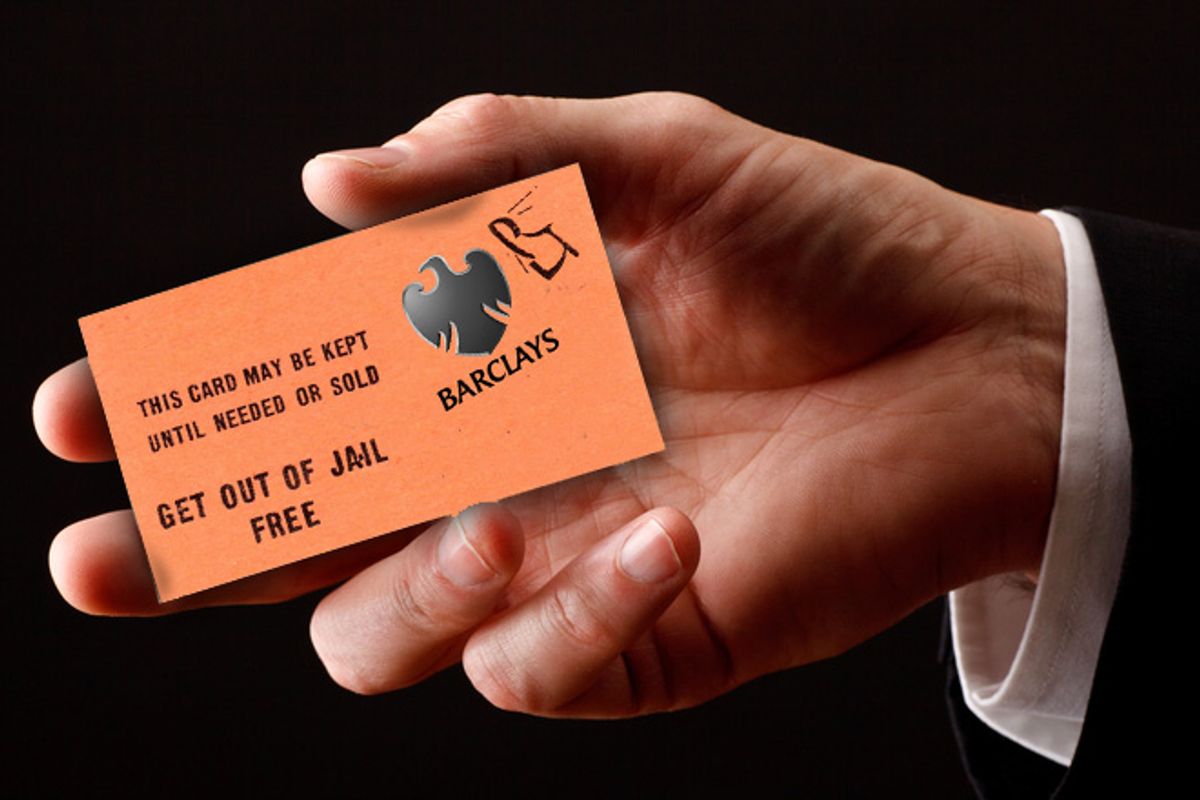 Has there ever been a better time to be a disastrously inept banker? Well, probably -- over the course of human civilization it's almost always been a pretty good time to be a banker -- but today's finance titans seem uniquely immune to punishment of any sort.

Remember how JPMorgan Chase accidentally lost $2 billion in a "hedge"-slash-huge stupid bet placed by a guy in the Chief Investment Office? Funny story, it will actually end up being closer to $6 billion, or maybe like $9 billion -- who can be sure, math is pretty complicated, it's all imaginary money anyway -- as the bank attempts to extricate itself from the insanely complex losing trade made by the office that is supposed to manage the bank's risk.

Funnier story: Remember when Mr. Jamie Dimon, the head of JPMorgan Chase and the World's Sagest Banker, was asked to sit before the Senate Banking Committee and be repeatedly complimented and praised? And remember how he kept mentioning "claw-backs," the weird bank term for taking bonuses away from people who screw up? Turns out Ina Drew, the former head of the Chief Investment Office -- the one who lost somewhere between more money than you'll ever see in your entire life and more money than God has ever seen in His entire life -- will not have any of her money clawed back.

Drew wasn’t fired; she was allowed to resign. As a result, she gets to keep, for herself, a whopping great slew of unvested stock and options. Understand: the whole point of vesting is as a retention device. You hand out stock which doesn’t vest for four or five years, as a way of ensuring that the employee in question hangs around for that long: they know that if they leave prior to the vesting date, that element of their compensation is worthless.

Unless, it seems, you work for JPMorgan: Drew had $17.1 million in unvested restricted shares and about $4.4 million in options, and all of them seem to have vested as of May 14, when she resigned. They were meant to incentivize her to work hard; instead, they have turned into a lovely farewell gift from the bank.

This is the most important rule of finance: It really doesn't matter how badly you screw up; if you're an important enough person you will never face any real negative consequences, besides a bit of bad press.

It doesn't even really matter if you attempt to defraud most of the Western world. British megabank Barclays -- New Yorkers may know it as the naming rights sponsor of the new Brooklyn Nets NBA stadium and the Atlantic Ave.-Pacific St. subway station -- was fined 290 million pounds (chump change!) after it was revealed that it spent years attempting to manipulate Libor: the rate, based on the price banks charge to lend to one another, that determines the prices of financial transactions, interest rates and loan terms across the U.K. and Europe. (They weren't alone! The Royal Bank of Scotland did it too. Everyone else probably also did it, but not as dumbly as Barclays, where they all wrote emails to each other about how cool Libor-rigging was.) Plus just about the entirety of Great Britain's financial industry -- Barclay's, Lloyds, HSBC, the Royal Bank of Scotland -- just received slaps on the wrist for selling insanely complex interest rate "products" to "unsophisticated" small-business customers with misinformation and deception. There are different words for this sort of thing -- most of us would say "fraud" is one of them -- when non-banks do it. So far no one is in jail for this, natch. Because laws don't work on this crowd! They're just too smart to follow the "laws" we invent, according to experts.

Barclays head Bob Diamond -- the "apology time is over" guy -- will not be resigning, thank you very much, because he is vitally important to the continued success of Barclays, and he's obviously a fantastic chief executive, and he also had no idea this extensive rigging was going on so you can't blame him for it. (The best managers know how to delegate large-scale theft and fraud.) And if you ended up losing money because of the interest rate-rigging scam, well, you will not be seeing any of those pounds they were fined. But personal responsibility is alive and well among the financier class: Mr. Diamond says he won't take a bonus this year! It's not dramatically poisoning yourself in a courtroom, but I guess it's a start. (Oh, hey, he's hosting a dinner for Mitt Romney sometime this month. Bet that'll be fun!)

Also, Basel says almost every large financial institution is constantly lying about its own finances, but, again, no one is going to jail for publishing false financial statements, because it's not like these people did something really bad -- like attempt to videotape a cop or sit in a lower Manhattan park overnight or something.