Can we call it class war yet? 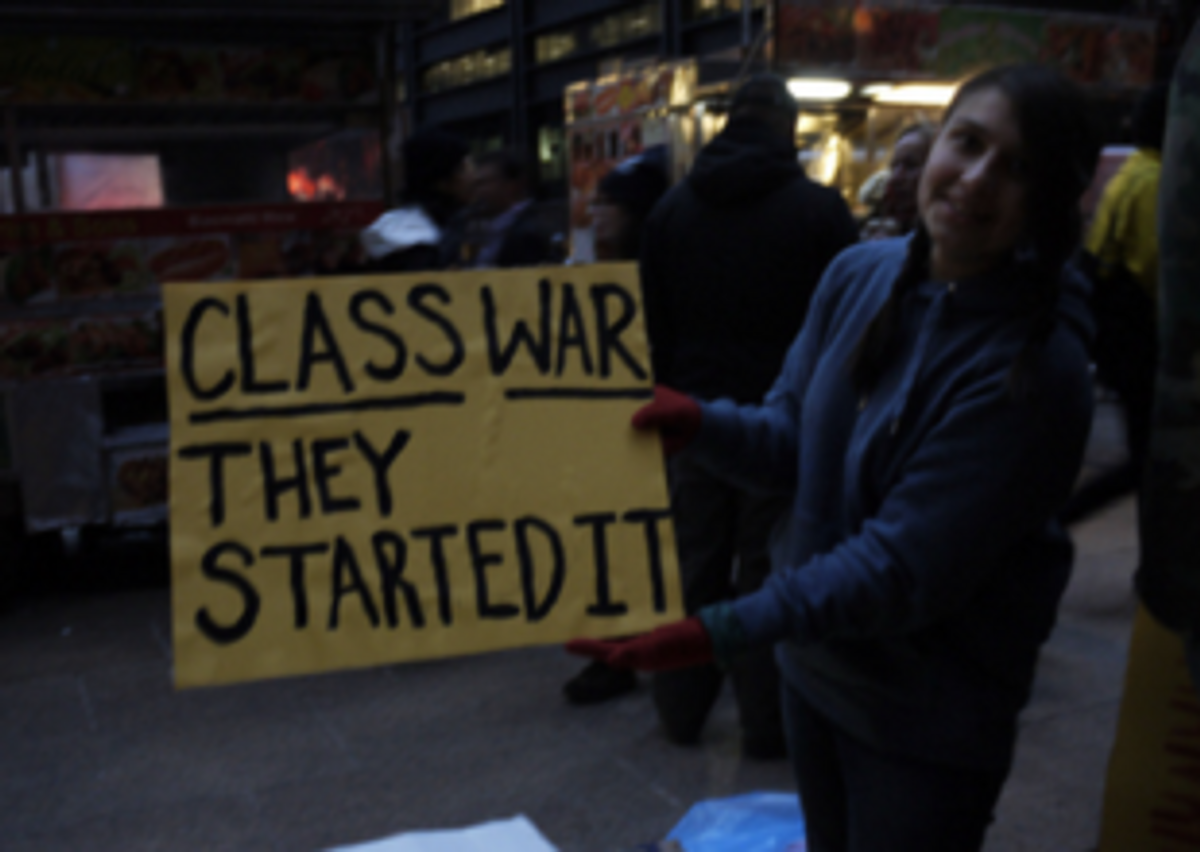 This week, David Segal at the New York Times broke the news to America that not only was Apple -- the computer and gadget manufacturer formerly seen as a symbol of good old American ingenuity -- making its profits on the backs of abused factory workers in China, but also on poorly paid store employees here in the US.

Lawrence Mishel at the Economic Policy Institute notes that's just a dollar above the federal poverty level. This for a company that paid nine of its top executives a total of $441 million in 2011.

“The discrepancy between Apple’s profits/executive pay and its compensation to its workers is a particularly glaring example of what is occurring in the wider economy,” Mishel writes.

And he's right. Also this week, Henry Blodget at Business Insider posted three charts that show just how out of whack our economic system really is. Corporate profits are now at an all-time high, while wages as a percent of the economy are at an all-time low, and fewer Americans are currently employed than at any time in the previous three decades.

Companies like Apple are squeezing their workers, leaving them to live on less, while lavishing pay and benefits on their executives. The death of lionized Apple chief Steve Jobs seems to have opened a floodgate of reporting and criticism of the company's labor practices, but all this really proves is that Jobs and his empire are no better than, and no different from, the rest of the US business elite. Just like everyone else, they're taking their profits directly out of workers' pockets.

“One reason companies are so profitable is that they're paying employees less than they ever have as a share of GDP. And that, in turn, is one reason the economy is so weak: Those 'wages' are other companies' revenue,” Blodget points out. And high unemployment makes workers willing to accept those poverty wages. When you're desperate for a job, any job is better than nothing.

Right-wingers from Michele Bachmann to Ron Paul have used high unemployment as an opportunity to call for eliminating the minimum wage entirely, letting companies decide just how little they think their workers are worth. Companies love to claim that if they're forced to pay more, they'll have to eliminate jobs, but these numbers show that actually, they're able to keep wages low and refuse to hire; available cheap labor supposedly leads to more job creation, but it's the hollow, gnawing fear created by ongoing high unemployment that keeps wages low and workers passive. And the rich are getting ever richer.

The “recession” is over — officially it ended in 2009, but for most people the pain was just beginning. Real incomes have continued to fall, and governments continue to slash budgets while corporate profits just keep going up. This is the new normal.

And it's only going to get worse.

The rhetoric of austerity, sounded loudest from Republicans but often echoed by far too many Democrats, is a language of belt-tightening, of shared sacrifice, of somber speeches by pompous politicians who proclaim that they feel your pain while announcing budget cuts that freeze salaries, lay off workers and force more work onto those who remain. And CEOs use that same language when sorrowfully explaining why they simply can't create jobs. Morgan Stanley's CEO, James Gorman, beset by New Yorkers at his bank's shareholder meeting, blamed the lousy economy when asked why he hadn't created the jobs his company had promised the city in exchange for massive tax breaks.

Because that's what rich corporations are able to buy with their record profits: politicians who turn around and hand them even more money, often in the form of tax breaks that hollow out city and state budgets and force even more austerity and even more social service cuts that fall on the backs of the same underpaid workers. (Remember FreshDirect, which was handed $129 million in tax subsidies to create $8-an-hour jobs?)

Corporate taxes, too — at least the ones corporations actually pay — are at a 40-year low, with an effective tax rate paid of 12.1 percent. They've fallen from about 6 percent of GDP to less than 2 percent, according to ThinkProgress's Pat Garofalo. Once again, that's what you can buy when you'd rather pay politicians than your workers.

Chris Hayes, in his new book Twilight of the Elites, notes that the ultra-wealthy have spawned a whole “income defense” industry dedicated to preserving their wealth and power, an industry that works tirelessly to push policies that favor the rich. He writes:

Over the last decade, the political arm of the income defense industry has been wildly successful. The tax cuts passed by Bush and extended by Obama represent a total of $81.5 billion transferred from the state into the hands of the richest 1 percent. Meanwhile, hedge fund managers and their surrogates have deployed millions of dollars to lobbyists to maintain the so-called carried-interest loophole, a provision of tax law that allows fund managers to classify much of their income drawn from investing gains as “carried interest” so that it is taxed at the low capital gains rate of 15 percent, rather than the marginal income rate, which would in most cases be more than twice that. It was this wrinkle in the law that helped Mitt Romney, a man worth an estimated quarter of a billion dollars, pay an effective tax rate of just under 14 percent in 2010. In 2008, 2009, and 2010, the House of Representatives passed a bill closing the loophole, only to see it beaten back by an intense wave of lobbying in the Senate.

With Citizens United, the Supreme Court gave the ultra-rich yet another weapon in the class war, another tool by which to control our politics. MIT economist Daren Acemoglu told ThinkProgress, “We already had a very serious problem. Instead of trying to stem that tide [of money in politics], we’ve done the opposite, and we’ve now opened the sluice gate and said you can use that money with no restrictions whatsoever.”

It's bad enough when the rich use their money to buy themselves tax breaks that help them get even richer. But millionaires and billionaires from Bill Gates to Betsy DeVos to Mark Zuckerberg are also putting money into pet political ideas — on education, for example, where their money buys them outsized influence over policy. Politics has become a playground for the ultra-rich where they get to test their pet theories on the rest of us, and we're expected to smile and thank them for their charity.

It's not just tax breaks and subsidies that have created massive inequality — it's also full-on war on the only means of organized power that working people ever had: unions. Private-sector union density hovers around 7 percent right now after years of concerted attacks, and for the last couple of years public-sector unions have been in the 1 percent's crosshairs.

From the Supreme Court, where Samuel Alito wrote a majority decision attacking unions' ability to collect money from workers they represent for political activity, to the reelection of Scott Walker in Wisconsin, public-sector unions are under pressure. Politicians keep slashing public-sector jobs, keeping unemployment high and tax revenues low and stalling the recovery, but they're also part of the attack on the one part of the economy that still has a strong union culture.

As unions declined, so have wages for most people. The Center for American Progress found in a study that as union membership decreases, so does the so-called middle class's share of national income. The middle class has long served as a buffer between those at the top and those at the bottom. As long as the majority of Americans were comfortable, had decent jobs and pensions, and could send their kids to school, the wealthy could stay wealthy and the poor were pretty much just ignored. And that middle class was built through decades of union agitation, not just for higher wages and health care benefits, but for the eight-hour day, for the weekend, and for safety in the workplace and some job security.

As Hayes writes, we're ruled by an ever-smaller group of elites who not only control all the resources, but all the power. The same people who are pushing wages downward are the ones paying for politicians' campaigns, and they're the same people on the boards of directors and trustees of our universities and our institutions — like JP Morgan Chase's Jamie Dimon, who serves on the boards of directors of the Federal Reserve Bank of New York, the National Center on Addiction and Substance Abuse, the Harvard Business School, and Catalyst, as well as on the board of trustees of New York University School of Medicine.

Meanwhile, for the vast majority of us, the recession that supposedly ended in 2009 looks more like a depression each day, and as long as low wages and high unemployment remain the order of the day, there's no recovery in sight.

Sarah Jaffe is an associate editor at AlterNet, a rabblerouser and frequent Twitterer. You can follow her at @sarahljaffe.