The GOP's world of pain

Attacks on Obamacare slam Romneycare, too. So let's just bash John Roberts. Why this issue won't go away 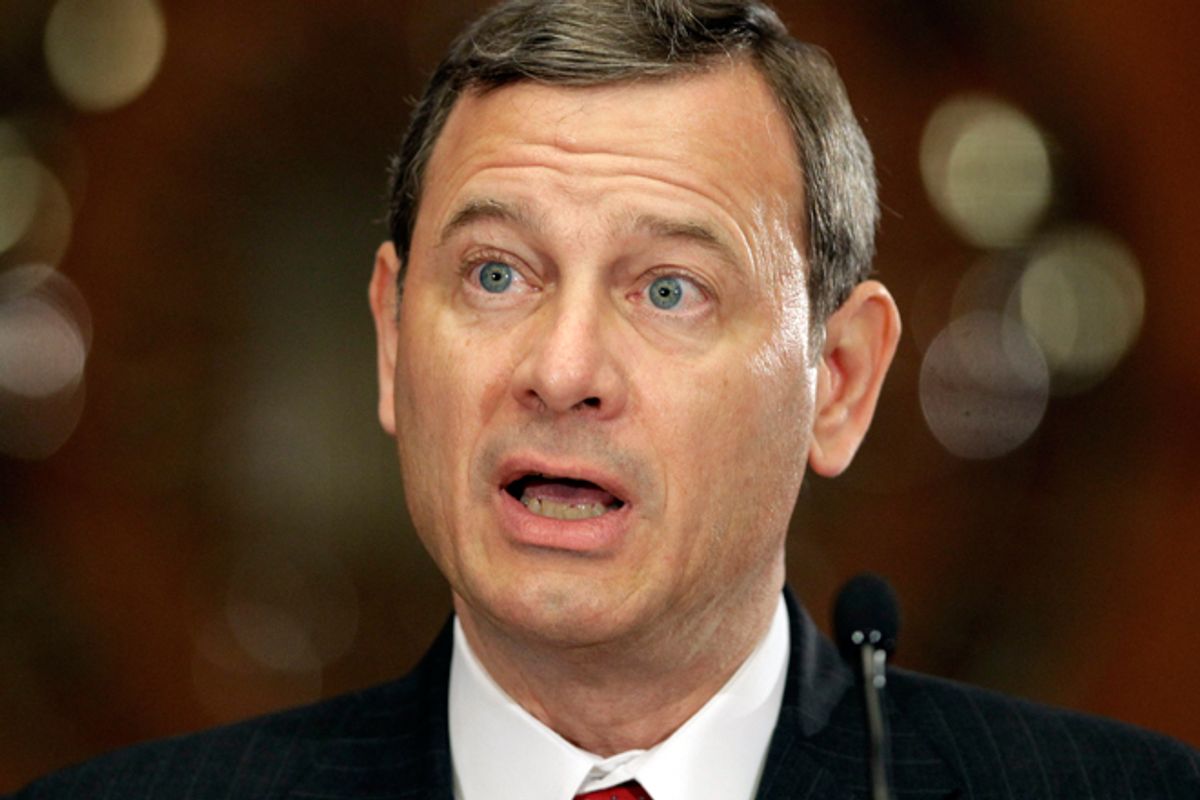 When it comes to the Affordable Care Act, President Obama is rubber and Mitt Romney is glue: Virtually anything bad Romney says about health care reform bounces off his presidential rival and sticks to him. That's why Romney advisor Eric Fehrnstrom had to stand up and contradict the entire Republican Party today, conceding that the penalty for not buying insurance, in Massachusetts currently and the rest of the country come 2014, isn't a tax. Take that John Boehner, Mitch McConnell, Sarah Palin and righties too numerous to call out here.

Well, and take that Mitt Romney, who jumped out and accused the president of a $500 billion tax increase on Thursday, the day the ruling game down. An unnamed Romney advisor told the Huffington Post Thursday that the ruling would help Romney as "people realize they just got hit with a massive tax increase." But apparently spending the weekend watching news shows dredge up old footage of Romney insisting the Massachusetts penalty wasn't a tax forced a little bit of intellectual consistency on the campaign. It was great theatre that it came from the same guy who gave us the colorful "Etch-a-Sketch" imagery when describing the way Romney would shake off his right-wing primary season persona and pivot to the sweet, reasonable middle for the general election. After trying to dodge MSNBC's Chuck Todd this morning, Fehrnstrom finally broke down:

FEHRNSTROM: The governor believes that what we put in place in Massachusetts was a penalty, and he disagrees with the court’s ruling that the mandate was a tax.

TODD: But he agrees with the president that it is not — and he believes that you should not call the tax penalty a tax, you should call it a penalty or a fee or a fine?

The one thing conservatives seem to agree on is the perfidy of Chief Justice John Roberts in joining the so-called liberal minority and leaving the foundation of the law intact. The crazies are saying predictably crazy and vicious things, from the demented Michael Savage blaming the decision on a medication Roberts may take, to former Fox personality Glenn Beck selling t-shirts calling Roberts a "coward." Radio shrieker Mark Levin called Roberts's decision "flat-out tyranny" on Fox today. To me the most interesting whine of the day came from the Washington Post's Marc Thiessen, who asks "Why are Republicans so awful at picking Supreme Court justices?" The former Bush speechwriter seems to take Roberts's decision personally, as a betrayal of the president and team who put him on the court.

The core of Thiessen's whine seems to be that Republican court nominees have to hide their actual views – maybe because they're radical and out of step with the country – while Democratic appointees can tell the truth:

Liberal Supreme Court nominees can tell you precisely how they stand on key issues and still get confirmed. In her 1993 confirmation hearings, [Ruth Bader] Ginsberg declared the right to abortion “central to a woman’s life, to her dignity” and was confirmed 96 to 3. [Steven] Breyer declared abortion a “basic right” and was confirmed 87-9. Imagine if a conservative nominee said the opposite? Their confirmation battle would be a nuclear war.

Liberal nominees can simply affirm liberal positions, while conservatives must speak cryptically in terms of their judicial philosophy. And as we saw last week, those philosophical statements do not necessarily indicate how they will vote on the bench.

It's nice to see Thiessen admit that some conservative court picks have been "cryptic," perhaps to the point of dishonesty, about their real views. He accuses Roberts of being "swayed by pressure from the New York Times, the Georgetown cocktail circuit and the legal academy." Of course he's also accusing his old boss of failing to adequately vet Roberts, who he fears may be turning into another Justice David Souter, the ultimately disappointing choice of Bush's father, coincidentally.

Expect this conservative food fight to continue, even though the Kaiser Family Foundation released a poll today finding that 56 percent of respondents think Republicans should stop trying to repeal the act and just move on. No doubt Romney is hoping the same thing, but it's not going to happen. Repealing Obamacare revs up the GOP base.

"He is the worst Republican in the country to put up against Barack Obama," Rick Santorum said of Romney last April. On this issue, Santorum turned out to be right. I'll be discussing Mitt Romney's rough day on MSNBC's "The Ed Show" tonight at 8 pm ET.