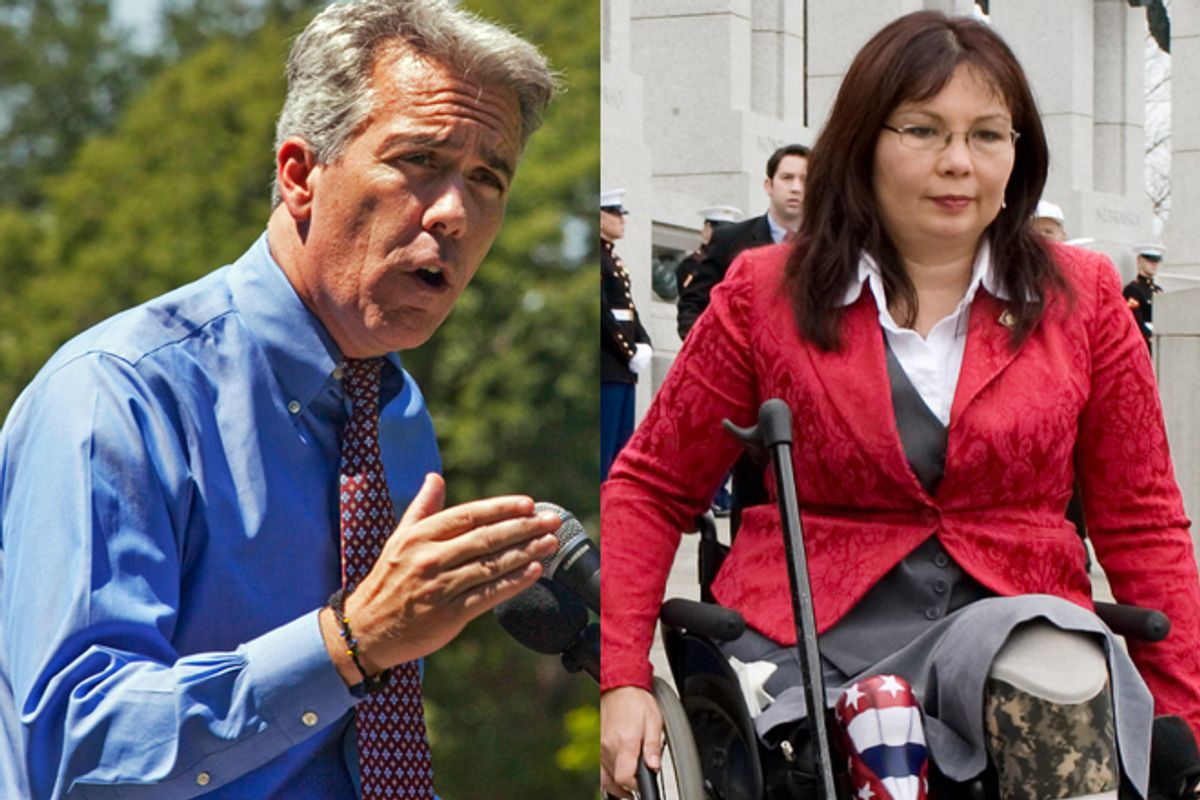 For the record, I don't think military service is the only route to heroism. People who are great parents are heroes in their own way.

But Illinois Rep. Joe Walsh, best known for not paying child support, has taken neither route to heroism. Instead, the Tea Party blowhard is now denying his Democratic opponent, Iraq war veteran and double amputee Tammy Duckworth, is a "true hero." (Think Progress has the whole video.) Apparently because she's been open about her military service, Walsh thinks she's showing off her sacrifice. But it's sort of hard to hide the fact that you've lost both your legs and the use of one arm (insurgents blew up her helicopter in Iraq).

That Duckworth: She's such a showoff when she enters a room in a wheelchair.

Walsh has apparently had enough of her histrionics. He told an Elk Grove town hall on Friday that Sen. John McCain was a "noble hero" because he didn't often talk about his military service. “Now I’m running against a woman who, my God, that’s all she talks about,” Walsh said.

Duckworth received multiple military awards, including a Purple Heart, an Air Medal and an Army Commendation Medal. After her injuries, she became director of Illinois' Department of Veterans' Affairs, until President Obama made her assistant secretary of Veterans Affairs. She's supported by ActBlue and VoteVets PAC. (More information here.)

“I have so much respect for what she did in the fact that she sacrificed her body for this country,” said Walsh. Then, according to Politico, he paused for dramatic effect: “Ehhh. Now let’s move on.”

Walsh is best known for falling roughly $100,000 behind in child support to his ex-wife and then failing to show up in court -- because, a staffer told the judge, "Mr. Walsh is a U.S. congressman." The judge shot back, “Well, he’s no different than anyone else.” The case settled in April.

Then there was the time he went off on his constituents in a coffee shop meeting that became a viral video, shouting, "Don't blame banks and don't blame the marketplace for the mess we are. I'm tired of hearing that crap!"

By the way, the real Joe Walsh – the Eagles and James Gang member (neither are any relation) – has endorsed Duckworth, and even performed a benefit concert on her behalf.

Walsh's cavalcade of crazy makes him a Tea Party hero, but the accumulation of offensive remarks is crimping his fundraising. If Sen. John McCain denounces him, Walsh could be done in November.