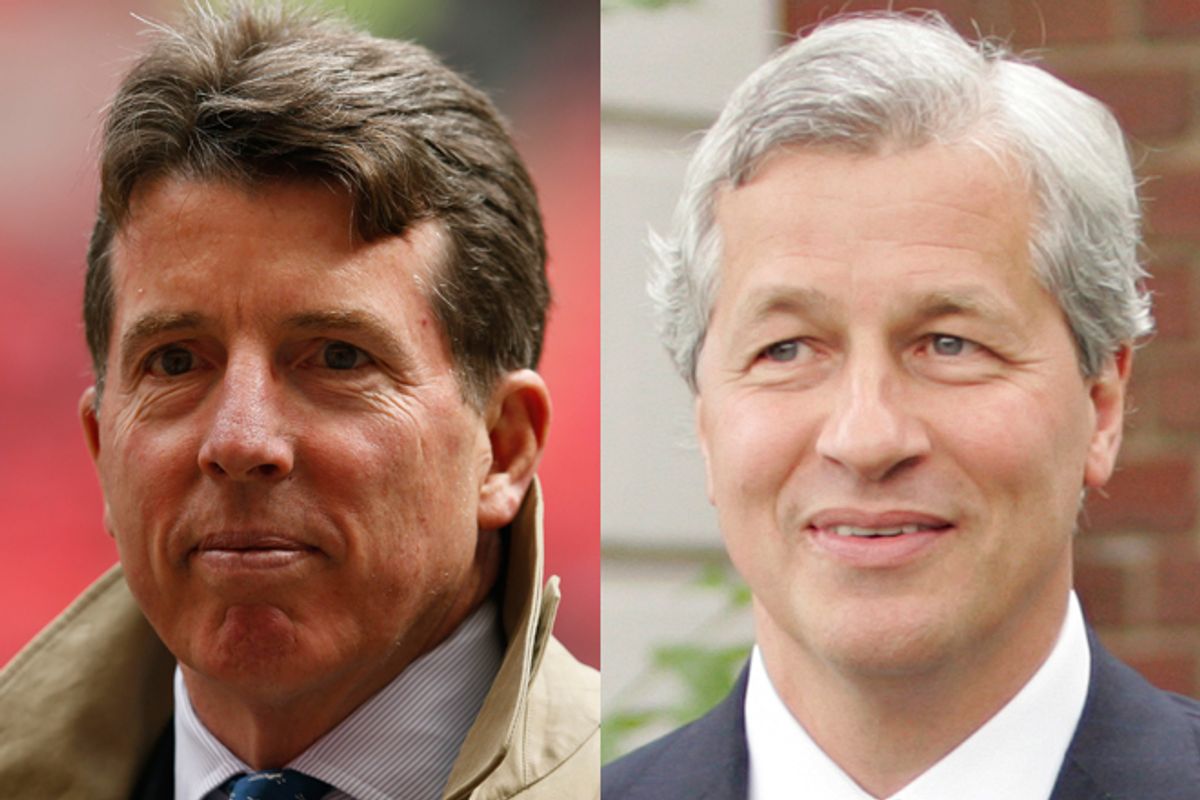 Thrilling news, accountability fans! Barclays Bank head Bob Diamond has announced his resignation as chief executive and director of the U.K.-based megabank, a week after the bank was fined 59.5 million pounds for attempting to manipulate the Libor rate. Just yesterday, Diamond had promised his staff that he'd stay on, in order to guide the bank through the parliamentary inquiries and Justice Department investigations that are still to come. Then his mind got changed for him.

According to BBC business editor Robert Peston, Diamond's departure was "encouraged" by Sir Mervyn King, governor of the Bank of England, who telephoned Barclays chairman Marcus Agius (who announced his intention to fall on his sword and resign yesterday) personally. This doesn't make the Barclays board look very smart.

My disclosure that the governor of the Bank of England and chairman of FSA wanted Mr Diamond to resign, and effectively bundled him out the door, is profoundly embarrassing for Barclays' non-executive directors.

The question for them is why none of them bothered to check what the attitude would be of the City's two most powerful regulatory figures before they accepted the resignation of Marcus Agius as chairman.

According to Reuters, Barclays traders are very disappointed that Diamond had to resign, because he was such a great head of the bank, and it would be hard to find someone else as good at running a megabank as he was:

"Everyone here has been bandying around names, but it's going to be hard to find someone of the same quality as Bob and John (Varley, his predecessor). I guess it would be hard to appoint someone from the investment banking side now."

Yes, it really will be hard to find someone as good at either not knowing about or openly abetting the reporting of fraudulent data designed to manipulate the interbank exchange rate in order to present a false impression of the bank's health. Managers that great don't just grow on trees.

Diamond's severance package is "still under discussion." And I'm very much looking forward to learning what it ends up being. (Now that he's out of the bank, Diamond plans on blaming everything on the Bank of England.)

Back here in the States, how's our favorite ineptly managed bloated quasi-criminal megabank doing? The New York Times reports this morning that JPMorgan makes a habit of having its financial advisers sell regular investors inferior JPMorgan products in order to enrich the company at the expense of its clients, because JPMorgan exists to make as much money for itself as possible by any means necessary. So brokers were strongly encouraged to push investors into products like JPMorgan's Chase Strategic Portfolio, which has excessively high fees (that go right back to JPMorgan) and deceptive marketing materials advertising much higher returns than are actually delivered.

Also the Federal Energy Regulatory Commission is now investigating JPMorgan for "potential power-market manipulation." JPMorgan owns or has the rights to "output from several energy generating facilities" and the feds are investigating charges that they engaged in "abusive" bidding strategies to extract "inflated" or "excessive" payments from power markets in California and the Midwest. The bank is, quite obviously, withholding numerous emails related to the bidding, so the FERC has subpoenaed them twice. If the government ever gets these emails they should be pretty interesting:

In a March 2011 email included in the filings, Francis Dunleavy, head of principal investments in the bank’s global commodities group, wrote to Blythe Masters, head of the group, that he will handle one regulatory inquiry “but it may not be pretty”.

Meanwhile, JPMorgan head Jamie Dimon has not yet resigned. Maybe this Bank of England guy should call him; he seems to get better results than our American regulators?