"Spider-Man" is the latest super-hero franchise to go backwards. Is there an original idea left in Hollywood? 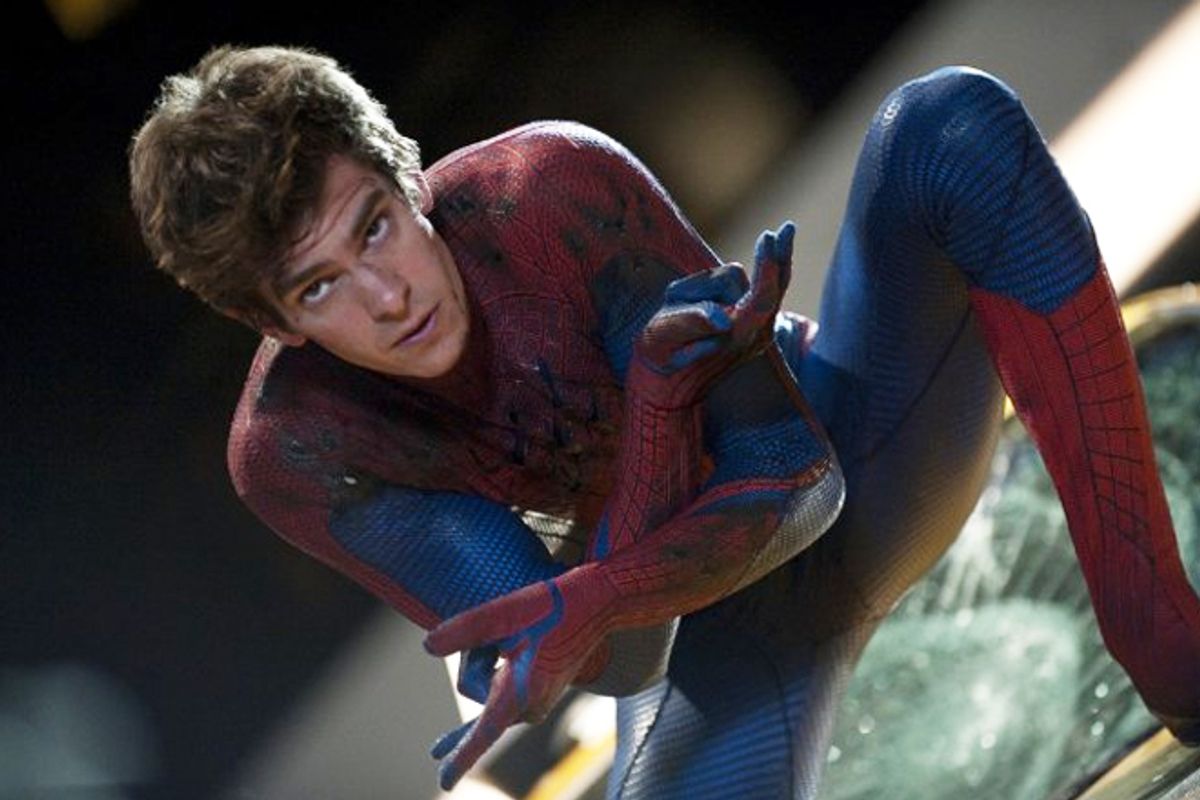 Andrew Garfield in "The Amazing Spider-Man"
--

In "The Amazing Spider-Man," the new remake of Sam Raimi’s adjective-less "Spider-Man" – because if you remember 2002, you weren’t there – a radioactive spider bites socially awkward teenager Peter Parker, who then gains superhuman abilities and learns that with great power comes great responzzzzzzzZzzzzzzzzzz....

Whoa, I just had the craziest dream – a nightmare, really – in which no one responsible for creating our mass entertainment ever had an original idea again!

While the gullible spend $13 on a movie they saw a decade ago, I’m going to watch it on DVD for free. Actually, I’ll do nothing of the sort, because – even though I love superheroes more than a man in his late 20s probably should – I never want to see another superhero origin story. And judging by "Green Lantern’s" box office, neither does anybody else. (Two weeks after the release of Ryan Reynolds’ by-the-numbers film, ScarJo divorced him. Coincidence?)

Maybe "The Amazing Spider-Man" is worth the ticket price – it’s 77 percent fresh on Rotten Tomatoes. But look, Hollywood, we get it. Traditional dramatic structure calls for depicting a normal day in the life of your protagonist, followed by a life-changing catalyst/transformation at the end of Act 1 – so it makes sense to illustrate how an Everyman becomes a superman. Even the Superman will receive a new origin in next summer's "Man of Steel." Except here’s a better plot than Ma and Pa Kent raising the alien baby that lands in their barn, as Richard Donner already gave us in 1978:

Everyone knows who Superman is, just like everyone knows who Spider-Man is, so we don't need to see how they become Superman and Spider-Man. Oh, modern filmmakers might change a few details – such as (potential spoiler alert) Peter Parker’s father engineering that radioactive spider, or (potential spandex alert) Superman not rocking his red underwear, which by the way is complete bullshit – but seriously, who cares anymore?

The reboot approach worked for Christopher Nolan's "Batman Begins" because the previous installment/abomination, "Batman & Robin," killed the entire franchise; there was no possible way to go forward, so they had to go back. "Spider-Man 3" was relatively weak, but not fatally so, and it managed to earn $890 million.

Besides, Spidey still had plenty of villains left to fight: Kraven the Hunter, Electro, Morbius, Scorpion, Rhino, Mysterio, Kingpin, Carnage, the Vulture and the Lizard, the last of whom appears in "The Amazing Spider-Man" even though it was Raimi's films that set his character up. Why not replace Tobey and Kirsten with Andrew and Emma, and just make "Spider-Man 4" – with a new tone, a new costume, a new production design, whatever – instead of forcing us to sit through Uncle Ben’s murder again?

This unnecessary reboot could devalue the franchise through origin fatigue. If Spidey 2.0 tanks at the box office, will the studio just reboot the reboot? What if it does well, but its sequel or threequel disappoints? How do we stay invested in a character when producers habitually move the story backward instead of forward?

For God’s sake, Warner Bros. is reportedly planning to reboot Batman again after "The Dark Knight Rises," because why leave the property alone for five minutes? Why leave any property alone? (When is Hollywood going to make a gritty reboot of "Schindler's List"? You know, darker and edgier.)

There's a reason why "Spider-Man 2" and "X2: X-Men United" rank as the best entries in their trilogies. (Also: "The Godfather, Part II," although Marlon Brando doesn't reprise his role as grotesque mutant The Blob.) Likewise, "The Avengers" raked in a billion dollars – and received universal acclaim – even though it mercifully omitted the emotional journey of an average sad-sack guy who morphs from a weakling into a powerhouse. Except for ... uh ... the Hulk, but that's just his shtick. Besides, we got his origin story on film. Twice.

Audiences are sick of that formulaic arc. We’ve seen it at least a dozen times since 2000. Yes, it can still work occasionally – for example, "Kick-Ass" and "Chronicle," which both showed how much fun this genre can be, perhaps due to those characters not possessing iconic stature. (And perhaps due to their creators having free rein instead of adhering to rigid, established templates.) As Marvel and DC reach deeper into their rosters, such as with the former’s obscure Ant-Man and Guardians of the Galaxy, audiences will require more orientation.

For heroes that we know and love, however, we don’t need a square-one reintroduction. We just need some heroics.