I flunked out of clown school

I thought becoming a clown would be easy, or at least manageable. The joke was on me 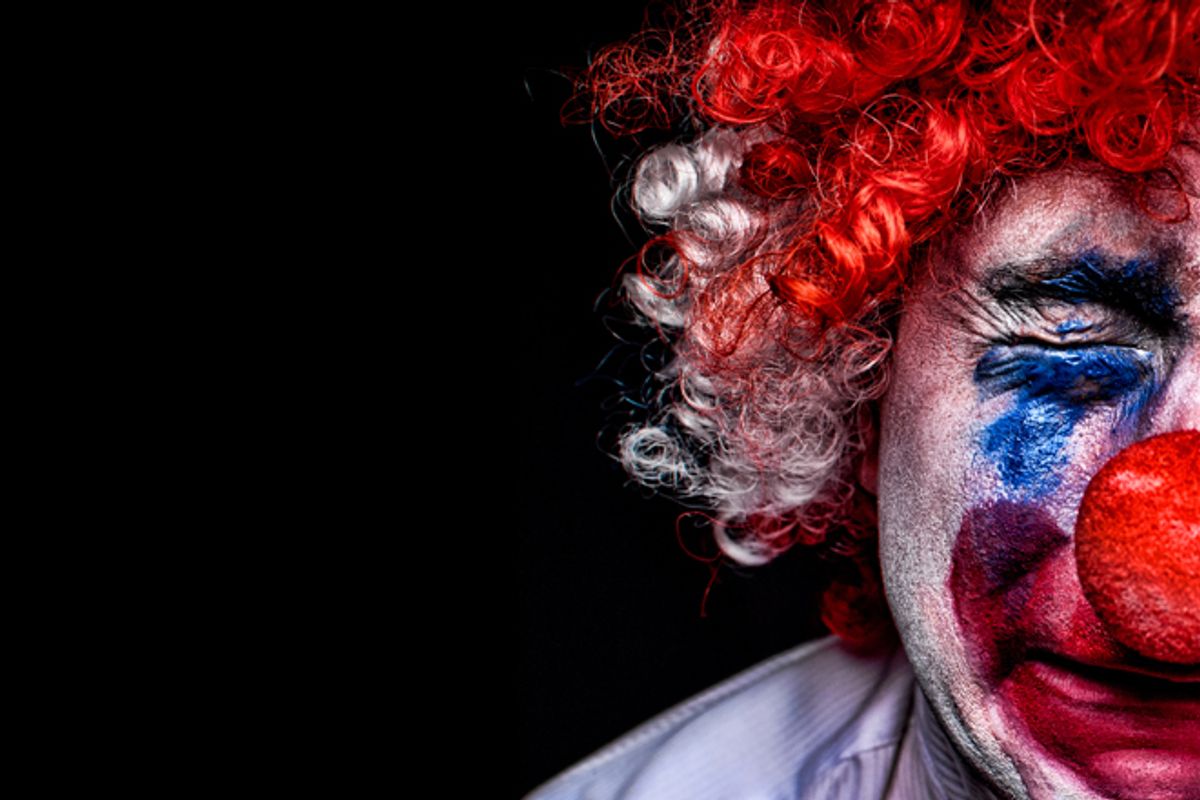 Pretty much anything passes for higher education these days. Enterprising institutions routinely offer programs in cosmetology, astrology, thimble repair, linen folding and bikini waxing. But hey, if it’s at a university, it must be rigorous, right? And these academic pursuits, let’s not forget, do lead to jobs.

Coming out of high school, I was in search of a career that would make my family proud and let me show off my true talents. So naturally I applied to clown college. Like any institution of higher learning, this meant extensive research: talking with guidance counselors, reading the viewbooks and underground accounts of campus life, consulting the U.S. News rankings and other magazines touting the “best values” in clown education, visiting campuses and chatting with current students (not the mimes, of course).

The standardized exam, called the Comic Reasoning and Performance test, was especially tough. Ostensibly designed to test only your clown aptitude, it poses questions that presume an existing knowledge of clown history and culture. I sensed an inherent bias toward those who had grown up in a clown family or had at least spent their formative years around a circus. I did well enough, scoring in the 80th percentile, but at that point I knew the most elite bastions of clown education were probably beyond my reach. I wished I could have opted for the CRAP prep course or hired a personal admissions consultant who purported to know all the clown-admissions insiders and whose advice came at a reasonable $150 per hour, but family funds were tight.

By comparison, the application form was a breeze. It asked a bunch of hypothetical questions, such as, “If given the chance to travel with a top circus troupe or to corner the Long Island Bat Mitzvah market, which would you choose?” It also required you to write an essay that asked with which clown, living or dead, you’d most like to share a cotton candy. I’d read in online discussion forums that it’s best to stay away from hackneyed choices such as Bozo and Clarabell. I chose Krusty instead.

As I’d feared, I failed to get into my reach school, Ringmaster U., but my admission to Jester College came with a partial scholarship and my choice of housing among the finest on-campus tents. I figured my mediocre CRAP scores nixed my Ringmaster bid, but I later discovered the school has a strong tradition of admitting children of alumni — Ringers, as they call them. I never really stood a chance.

My first year was predictable, largely because of the general education curriculum. We all took the same courses, such as Rodeo Responsibilities, Props and Pratfalls, and Legendary Clowns of the Western World. Electives allowed us to explore our personal interests in topics like unicycling and stilt aerobics. Some required courses were oversubscribed, shutting out students and leaving them in doubt as to whether they'd graduate on time.

Even with my partial scholarship, I could barely make ends meet. I landed a work-study job custom-fitting floppy shoes -- a commitment that absorbed 20 hours a week -- and my performance began to suffer as a result. I couldn’t get my lapel flower to squirt straight, and my “mime trapped in the box” routine evinced a more rectangular than square orientation. Even worse, while plowing a pie into a classmate’s face, I dislodged his foam nose and knocked his derby askew, exposing a rubber chicken’s beak. Shame and scorn fell upon me.

Ultimately, my failures ran deeper than botched tricks and faulty gags. Clown elders spoke of creating a personal brand, a professional identity that would set me apart from legions of other performers. Should I be Sinisterio the Dark Jester? Take a more playful approach and bill myself as Quacky the Six-Foot Duck? How about Moody the Contemplative Clown? Brainy the Intellectual? Nothing seemed to fit.

Nor did I assimilate with any of the clown cliques — the jock clowns with their acrobatics, the pothead clowns, the earnest ones who formed study groups. I was a loner, a sad clown who didn’t need tears painted down his cheeks. The Office of Clown Counseling and Retention offered some consoling advice: When you flop, get back up and keep dancing.

They tried, but eventually I failed. My CPA, or Clown Performance Average, dropped below 2.0 thanks to D grades in poorly chosen electives — Hobos of the Great Depression and Combating Coulrophobia. I became yet another clown dropout, a lost soul destined to forever wonder how many smiles I might have engendered. I can’t blame the system, really; generations of successful alumni testify to the college’s ability to pump out performers. Maybe it was my fault. Maybe I just wasn’t clown material.

I harbor neither regret nor bitterness. I have moved on, though I do keep tabs on former classmates via Facebook and the alumni magazine, which I receive along with calls and letters seeking donations. On some level, I suppose, I am an alumnus. And a part of that experience will stay with me. I may not be a graduate, but I’ll forever be a clown.