The post-Cold War era is over

Global free trade and indefinite American military hegemony are both dead. What comes next? 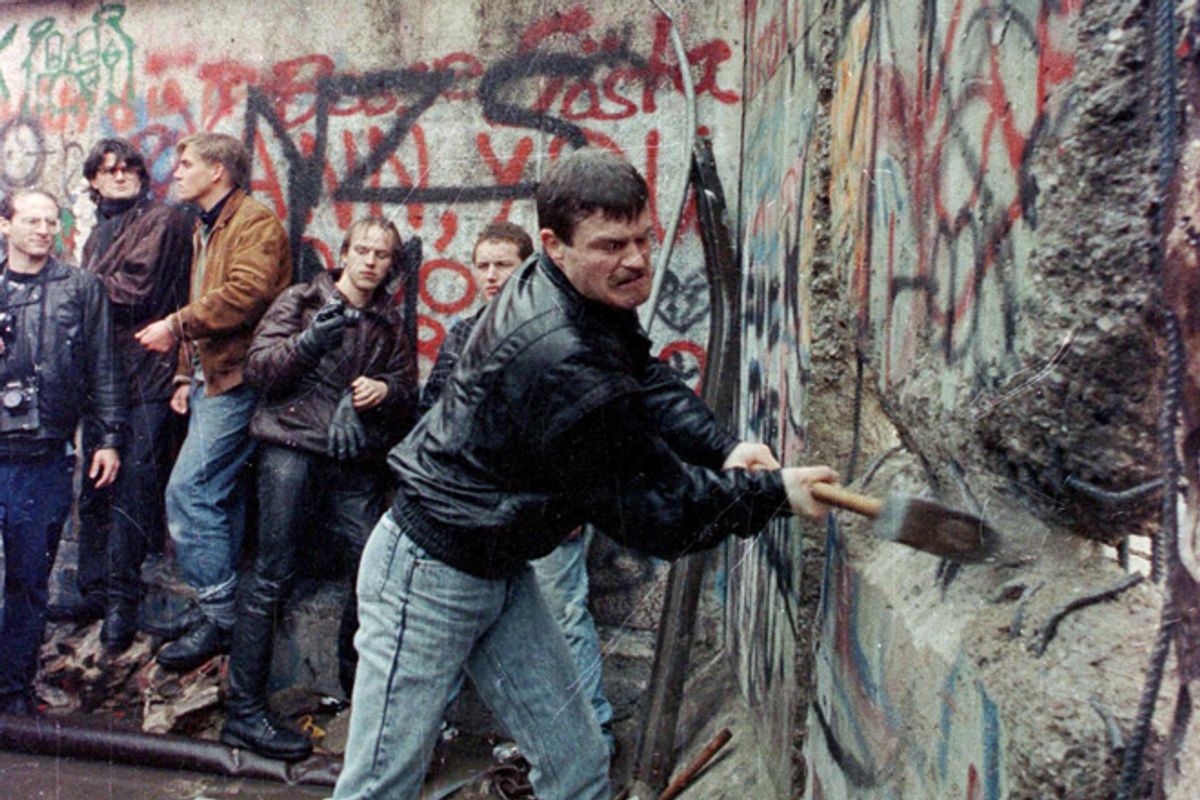 A demonstrator attacks the Berlin Wall with a sledgehammer in November 1989. (Reuters)
--

From the economic problems of the eurozone to the deepening military rivalry between the U.S. and China, a number of smaller crises are part of one, inter-related crisis:  the crumbling of the post-Cold War order. The utopia of free market globalization under benign U.S. leadership that animated Democrats and Republicans alike after the fall of the Berlin Wall has vanished, like a mirage. As that fantasy future fades, the question is: What genuine future will replace it?

The official version of history shared by most of the bipartisan American establishment is that the Cold War ended with the establishment of the U.S. as the “sole superpower” and the embrace by most or all people in the world of American values with respect to democracy, human rights and economics. In the neoconservative version, the end of the Cold War allowed the U.S. to create a semi-imperial global hegemony that could last for generations. In the centrist internationalist version, China, India and other emerging nations would see the benefits of the rules of world order that America favored, even as they moved internally toward free elections and free markets. The result would be a global utopia — a rule-governed world market, policed by a benevolent United States with the consent of a grateful humanity.

To realists, it was clear that this was a fantasy. For one thing, the rule-governed global marketplace never existed from 1989 onward. Not only did Japan, South Korea and Taiwan continue to reject free market capitalism for state-directed mercantilism, but post-Maoist China chose to adopt the statist, mercantilist East Asian economic model, not the liberal Anglo-American model. Meanwhile, in the 1990s the Europeans rejected the offer of a transatlantic common market and deepened their economic integration, to the short-term benefit of Germany, whose capitalism combines liberal elements with a version of East Asia’s export-oriented mercantilism.

To simplify a complex history, before 2008 China, Japan, Germany and other countries were able to run permanent surpluses in manufactured exports only because other countries like the U.S., U.K. and Greece agreed to run permanent trade deficits, financed in part by borrowing from abroad. This unstable Ponzi scheme had nothing to do with free market globalism, which was never really tried after the Cold War. Instead of moving toward free market capitalism, as many Americans hoped, China has reemphasized the role of its state-controlled industries in recent years.

It was also clear to critical observers that the American establishment’s plan for permanent U.S. military hegemony was doomed because the American people would never be willing to shoulder the costs. And sure enough, by 2006, the American people were fed up with the limited costs of two relatively small, unsuccessful wars in Iraq and Afghanistan. President George W. Bush himself replaced his neoconservative Secretary of Defense Donald Rumsfeld with a realist, Robert Gates. Since then U.S. defense strategy has effectively replaced neocon dreams of global hegemony with a more modest realist strategy in which the U.S. will act as “offshore balancer” of China and other potential Eurasian great power rivals.

The two dreams of the American establishment in the post-Cold War Era — global free trade and indefinite American military hegemony — were dead even before the global economy crashed in 2008. Whatever the world looks like a decade or two hence, it will not resemble the world that Thomas Friedman, the apostle of free market globalization, or neocons like Robert Kagan and Bill Kristol expected back in the 1990s.

The retrenchment of the United States in response to its prolonged internal crisis of slow and unequally shared growth is being accompanied by the decay of its old alliances. Nowhere is this more evident than in Europe, where the German Question has been opened once again.

The German Question was the central question of world politics from the unification of Germany under Bismarck in 1871 until the late 1940s. Twice the U.S. joined Germany’s great power neighbors Britain, France and Russia to prevent Germany from using force to dominate a German-led European bloc that could rival the U.S. and aspire to world domination.

The end of the Cold War doomed these restraints on Germany. The two Germanies merged to form a much bigger united Germany. The collapse of the Soviet bloc replaced the smaller European community, centered on France and West Germany, with a much larger Europe with united Germany at its center. The refusal of Germany, along with France, to take part in America’s misguided invasion of Iraq in 2003 marked the effective end of NATO as an alliance under American leadership, although the alliance persists as “coalitions of the willing.”

The eurozone crisis will end with the further erosion of constraints on Germany. Ironically, the creation of the euro as a common currency was supported by France and other neighbors of Germany as a way of ensuring Germany’s subordination to European regional institutions. But the real beneficiary has been Germany, because their sacrifice of their own currencies deprives Germany’s neighbors of one method — currency devaluation -- for preventing their industries from being wiped out by German exports.

However the crisis ends, the position of Germany is likely to be strengthened. If Europe moves toward deeper, federal integration, German dominance is likely to be formally entrenched. If the weaker economies leave the eurozone, then Germany will be even more dominant in the bloc that is left. And in the unlikely event that the EU were to crumble, Germany would still be the strongest power between the Atlantic and Russia. And unlike their parents and grandparents, tomorrow’s Germans, while remaining liberal and democratic, are not likely to forgo the pursuit of national self-interest because of fear of Russia or guilt over the Third Reich.

At the other end of Eurasia, China has rejected America’s informal post-Cold War offer to accept permanent subordination to the United States, in return for U.S. military protection and access to American markets. China is too big and potentially powerful to be an American sidekick like post-1945 Japan. Though none dare call it a cold war, that is what the Sino-American military rivalry, complete with Chinese cyber-attacks on the U.S. and America’s search for bases in India and Indochina, increasingly looks like. While direct conflicts among great powers are unlikely, the same cannot be said of new cold wars.

For most of the last several hundred years, trade has been subordinated to military considerations, as great powers struggled in a multipolar world order. During the Cold War, however, the demilitarization of the former Axis powers, West Germany and Japan, created two kinds of powers:  military superpowers, the U.S  and the Soviet Union, and civilian trading states, West Germany and Japan. The U.S. concentrated on military crusades, rejecting industrial policy, while the Germans and Japanese forswore military aggression and focused on industrial policy, assured that their military interests would be protected by the Americans.

As the Cold War and the post-Cold War era fade into the history books, this temporary distinction between military states and commercial states will vanish, to be replaced by some version of the historic norm — a first rank of great powers that combine realpolitik in military policy with realekonomik in trade and investment policy. In a multipolar world there will be no single military hegemon playing the role played by the U.S. until recently. And there will be no rule-governed global free market, because great powers in a multipolar world cannot allow their industrial base — the basis of their military strength — to be determined by the decisions of multinational companies, private investors and foreign governments.

All of this should be evident to our political leaders and opinion leaders.  But it is hard to see what is coming in a decade or two when the horizons of your consciousness are only a few years into the past and future.