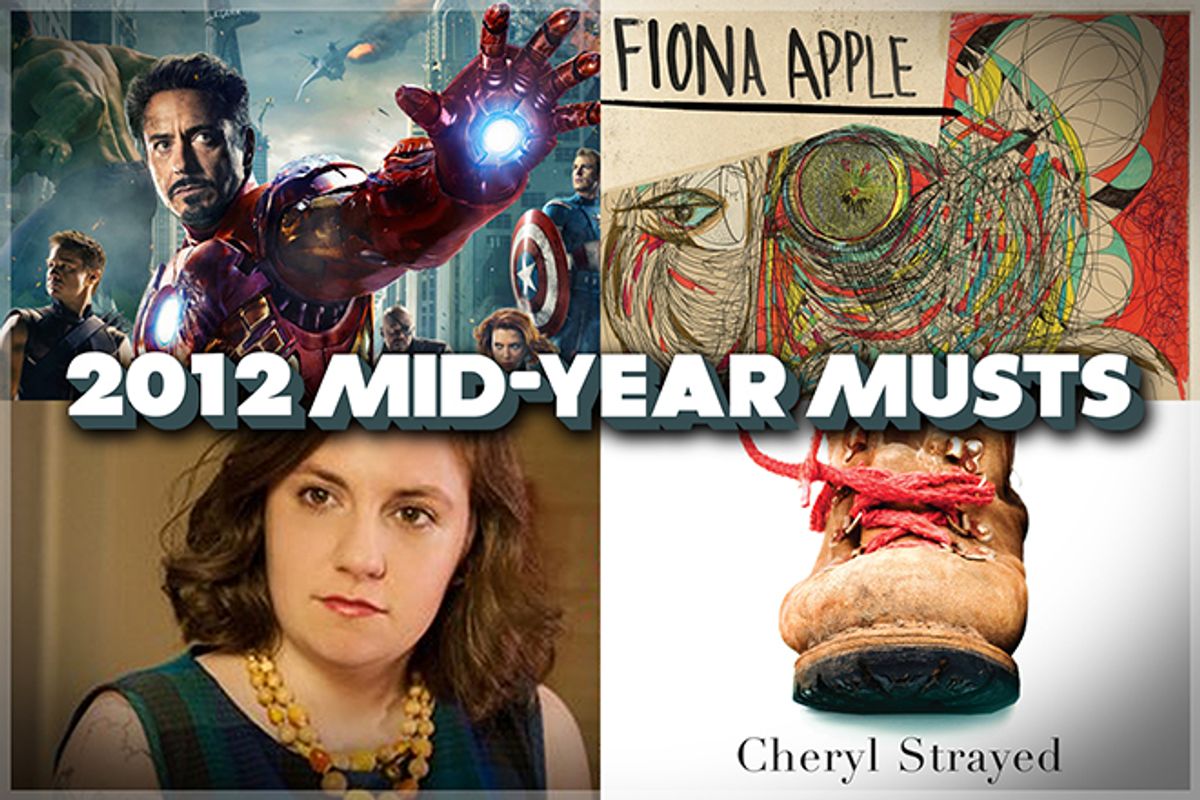 It's July 4, and you know what that means -- it's only about five months before all the best-of-2012 lists start.

But if you're like us, the Netflix queue is already packed, and there's that looming fear the books teetering on the nightstand will crush us in our sleep. Now that it's summer, there's finally time to catch up -- if you play it smart. After all, the big fall novels and the new TV season will be on us before we know it.

So here's your 2012 cheat sheet -- everything you need to know about the best of culture, from the big things you're tired of hearing about (seriously, just go watch "Girls" already) to the deservedly buzzed about (stuff "Gone Girl" in your beach bag now, please). And at the end, some of our critical favorites for some extra cool points.

READ "Wild: From Lost to Found on the Pacific Crest Trail" by Cheryl Strayed. When a book has enough of a wallop to reduce a New York Times critic to tears and lure Oprah into reigniting her legendary book club, it must be pretty special. "Wild" really is. What's the part that got you most? The sudden loss of her mother to cancer? The last time she saw her horse? The shudder-inducing scenes of her toenails blackening and falling off? The moment when she asks, "What if I forgave myself? … What if yes was the right answer instead of no?" The whole book is a glorious achievement, made more shining by the fact that Strayed addicts will get another treat later this summer, when her collection of Dear Sugar columns, "Tiny Beautiful Things," is released. Two Strayeds in one year? How did we get so lucky? -- Mary Elizabeth Williams

WATCH "Girls." The most controversial show of the year is, to the mind of this particular critic, one of its best. The tale of Hannah Horvath and her three pals meandering through (yes, a very white) Brooklyn, each other and the boys of Brooklyn got less realistic as the series went on, but also funnier, more formed, more TV show-like. Just as relevant a transformation for one’s viewing pleasure: the morphing of Hannah’s beau Adam (played by the magnetic Adam Driver) from a self-involved, sexually confident heel, to a slightly less self-involved, sexually confident dream boyfriend. People will continue to insist you should love or hate this show, so make up your own mind about all of Jessa’s wonderfully operatic flouncing, the perfectly observed one-liners, that gonzo female masturbation incident, and the late-night Twitter dance parties.  -- Willa Paskin

LISTEN Fiona Apple: “The Idler Wheel Is Wiser Than the Driver of the Screw and Whipping Cords Will Serve You More Than Ropes Will Ever Do.” In 2012, it’s easy to forget that Fiona Apple is a hard sell. Seven years after “Extraordinary Machine,” she finally released her follow-up with a hideous album cover, a rambling and nonsensical title, and a lyric sheet full of jumbled syntax and strained metaphors. On paper, “The Idler Wheel” doesn’t sound like an album you’d want to spend a lot of time with, much less one of the best of the year. On your turntable, however, that messiness is endearing more than alienating. The record’s musical austerity (it’s primarily voice, piano and a dizzyingly inventive drummer) possesses the intensity of heavy metal without the aggression, and even her purplest lyrics serve painful self-examination rather than simple whining. “How can I ask anyone to love me when all I do is beg to be left alone?” Apple asks, getting right to the central contradiction of the album and maybe even her career. In the end, we listen because of the mess, not despite it. -- Stephen Deusner

READ "Gone Girl" by Gillian Flynn. Nick Dunne comes home on the day of his fifth anniversary to find his suburban Missouri house tossed and his wife, Amy, vanished. Flynn's ingenious, mercilessly observant crime novel features Nick's account of the unfolding media circus following that disappearance, alternating with excerpts from Amy's diary, in which she describes how they met as two young magazine journalists in New York and how they ended up, miserable and estranged. "Gone Girl" has two mysteries: What happened to Amy and what happened to Nick-and-Amy. Why did this marriage, or any marriage, fall apart? And what lengths will the partners go to to escape? --Laura Miller

WATCH "The Avengers." Sure, I'm on record expressing my philosophical doubts about Joss Whedon's superhero assemblage, which is the year's biggest hit to date (and will probably remain so). But it's the one summer movie to see this year (along with Christopher Nolan's upcoming "Dark Knight Rises") if you don't see summer movies. If you've already caught "Avengers" once for the stars, the quips, the production design and the show-stopping action numbers, see it again to appreciate the finely calibrated balance of Whedon's screenplay, which moves through action, characterization, plot and comedy in perfect rhythm. Whether Whedon's talents are best suited to his new career as an A-list Hollywood director, well, we'll just have to see about that. The die is cast, and the results are highly impressive. (Still showing in some theaters, with DVD, Blu-ray and 3-D Blu-ray release set for Sept. 25.) -- Andrew O'Hehir