The Web for the neighborhood

A new tool is a sounding board for building better communities 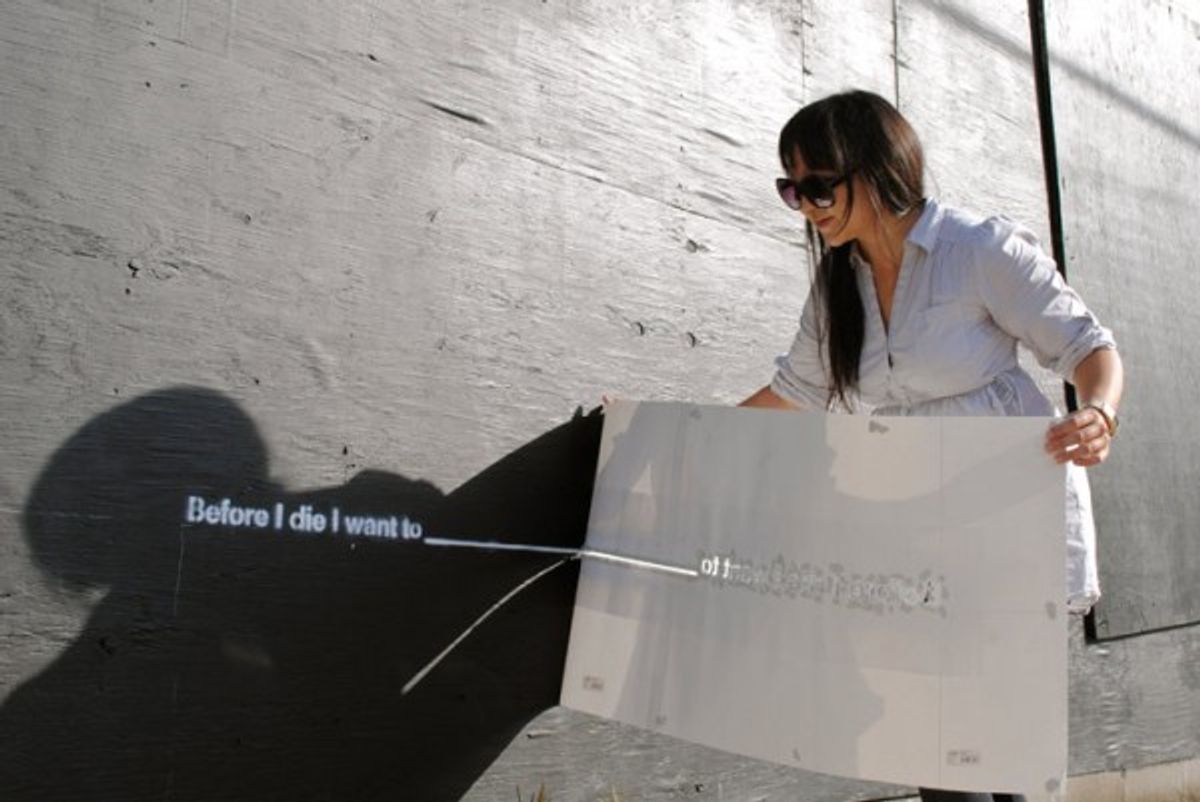 This piece originally appeared on Next American City.

Candy Chang moved to New Orleans in 2010. A small, intense woman, her background was in architecture and design. She had been living in Finland, but like scores of idealistic twentysomethings, she found herself drawn to the Crescent City. She was lured by the notion of becoming part of the burgeoning recovery that was changing whole neighborhoods in ways nobody ever predicted before Hurricane Katrina turned reality on its head. As an artist, she saw a canvas.

New Orleans was changing fast in 2010. The city was still reeling from the storm — many citizens had either decided they were never going to return, or realized they would never be able to. Those that had made their way back, or coming for the first time, were carving away rot as quickly as they could. Others were settling comfortably into it. The Marigny and adjacent Bywater neighborhood — about two miles downriver from the already-restored French Quarter — radiated emptiness and energy in the span of a single block. It was a shell, and the future was up for grabs.

Chang wanted a way to explore what recovery held for the fast-changing area, long an understated destination for bohos fast turning into a kind of lusher and drunker incarnation of Williamsburg. She thought she could find a way to project the desires of a shifting population on to the environment around her. She printed up red and white stickers with room to write in the middle: “I Wish This Was _____.”

It was when people started to talk to each other using the stickers that Chang realized there might be something going on here that could go past a simple art project. Looking at it from one angle, she had just turned a real wall into a Facebook wall. She didn’t know where to go next.

One person wrote “I Wish This Was a Farmer’s Market.” Somebody responded “Me too!”

One person wrote: “I Wish This Was a Bakery.” Someone responded: “If you get the financing, I’ll do the baking!” There had to be a way to get that to happen.

In 2011, “I Wish This Was” made the jump from the storefront to the Internet and became Neighborland. Like the storefronts, it’s a sounding board for a better community, except now it’s moving at broadband speeds. People are still asking for buses and groceries, but people are also asking for computer science degrees at Tulane, recycling programs and zoning ordinances And the right people are listening. The neighborhoods where it has been launched are changing at breakneck speeds, and Neighborland is hoping to give their residents a stronger voice in how that happens.

The tool is, from a nuts and bolts standpoint, not that much different from Twitter or Facebook. People talk, people second what others have said, people bounce ideas up and down. As far as Neighborland is concerned, an Internet discussion is a nice distraction but not the main product. The streets are where the real action is. The trouble is getting there.

The resemblance to social media like Twitter and Facebook turned out to be prophetic. Neighborland recently attracted big investment from Twitter co-founder Biz Stone’s Obvious as a way to take the social interactions pioneered by other programs and create civic engagement in a more intentional way. They’re cautiously making the transition from an art project in New Orleans to a tool that could change the ways communities interact with themselves and their cities everywhere.

As Neighborland looks to expand its services to other neighborhoods in New Orleans and other cities in the country, it’s running into the old push-and-pull of technology and reality. To succeed, it has to find a way to tie their service as closely to the neighborhoods it will travel to as the ones that it started in. It may have been born at a time defined by Facebook and Twitter, but it’s going to have be something more than those in order to work. Facebook wants to bring offline connections online. Neighborland wants to bring online connections back into the offline world.

Chang is the dreamer behind Neighborland, but Dan Parham, a designer and product strategist by trade, is the businessman.

When the two began working together in 2010, Neighborland was one of just a few sites probing how people engage with cities, but in the years that followed many more have popped up. PublicStuff takes a more personal and practical approach by allowing users to post things that are broken and try to get them fixed. Everyblock uses Facebook as a platform, wrapping calls for service in with restaurant reviews and photos. Nextdoor takes a hint from the original Facebook concept and gives neighborhoods their own private pages, invisible to outsiders. The Bloomberg administration in New York uses Change by Us to channel citizen ideas into grant-supported public projects. While Chang used nametag-style stickers to illustrate her “I Wish This Was…” project, Change By Us uses a post-it note motif. The aesthetic similarities signal a deeper commonality; both want to make what happens on the Internet matter in the physical world.

Other apps take a more focused approach. It’s a hacker mentality — find a capability within a complex system and make it work for you. Bike route apps use topographical data to make it easier to navigate hilly cities. Uber uses GPS data to link off-duty town-car drivers with patrons that can afford to pay them. Hourly works like a rapid-fire Craigslist, connecting people who want to do odd jobs with people who need odd jobs done.

“It was evident to us early on what outcomes we wanted to achieve,” says Parham. “Just asking people what they wanted — which is a provocative question, in a lot ways — that’s all the tool was.”

Over time, discussions on the New Orleans Neighborland have gotten more ambitious — streetcar extensions, recycling programs and gun laws are a few of the topics that have been broached. While other groups in town, such as the city’s non-profit transportation advocacy group, Transport for NOLA, have begun work on some of these issues, Neighborland is hoping that its virtual push will help. As the community sets its sights higher, so does the company. Already, Neighborland has launched in Boulder, Minneapolis and St. Paul, with plans for more. Now the trick is going to be finding a way to make something that started so inextricably tied to post-Katrina New Orleans become a native creation in any city in the country.

The high-profile investment from Biz Stone and Obvious has helped Neighborland, but the financial question still looms large. Advertising — the go-to option for monetizing web traffic — doesn’t seem like it could carry the day. Charging cities for the service goes against the the project’s altruistic mission. They toyed with the idea of selling site-selection information to businesses before realizing they were already giving it away for free.

Neighborland is a more expensive proposition than most social media; it can’t just expand to new cities without having a competent community manager on the ground, and that takes money. But where that money is going to come from is still up in the air. At present, the start-up is taking an approach similar to Twitter and YouTube: Worry about it later.

Access and privilege lurk in the background. The night market, app data and computer science weren’t what everyone in the community was asking for, just what the people who were using Neighborland were asking for. Too often, the Internet helps to cement extant partnerships rather than forge new ones. Larger questions like streetcar extensions and glass recycling start to address the questions, but discussions that start on the Internet have a way of amplifying those who don’t have any trouble being heard.

They’ve already had to make compromises — early on, they wanted to avoid a mobile app because of the access problems. But they kept seeing people use mobile devices, and they had to make the call.

“You have to swim with that current if you’re going to play in the consumer web space,” says Parham, the company’s CEO. Neighborland now has a mobile product.

On Neighborland New Orleans, discussion runs the gamut from the obvious to the impossible. It’s hard to tell exactly what the site has done — meetings about a computer science major at Tulane University might have happened anyways, streetcar extensions were already a known quantity in the city and people had already discussed a night market. Neighborland didn’t make these things happen. But it may have helped to facilitate them.

Biz Stone has grand notions of Neighborland. Social media executives have a habit of leaving the horse behind and riding the cart down a hill when it comes to claiming involvement in the most broad of world events, but there’s a kernel of truth in what he’s saying. Neither Facebook nor Twitter started the revolutions that made up the Arab spring . But they didn’t hurt. For their own part, they facilitated. For Stone, Neighborland is part of an ongoing effort to find out just what social media is here to do. He writes on the Obvious homepage:

“We all have issues, big and small. Toppling oppressive regimes and protesting corruption are appropriately top of mind. But what about everything else that surrounds us and shapes our daily lives? How should we go about uniting at a more modest level to improve our schools, our streets, our local shops — our communities?”

“When neighbors can collectively discuss issues, propose ideas, and unite to have their voices heard, there is virtually nothing they cannot achieve to improve their communities.”

Parham is concerned about other things right now. He worries about out how Neighborland might never make money, how to streamline inter-operative functions, hiring community managers, etc. But that grander vision is still troubling. The discussions on Neighborland are involved, detailed and strikingly academic. But that doesn’t necessarily make them different from “I Wish This Was Cover’d in Bacon.”

The test is coming, as Neighborland and apps like that start to expand and seek profitability, they’ll have to figure out if they end up toys of the tech-savvy elite or ways to move back from living online to living in cities.

MORE FROM David Thier