My life in iPhone apps

I use my phone to track nearly everything: My sleep, my moods, my TV watching. And it's changed everything 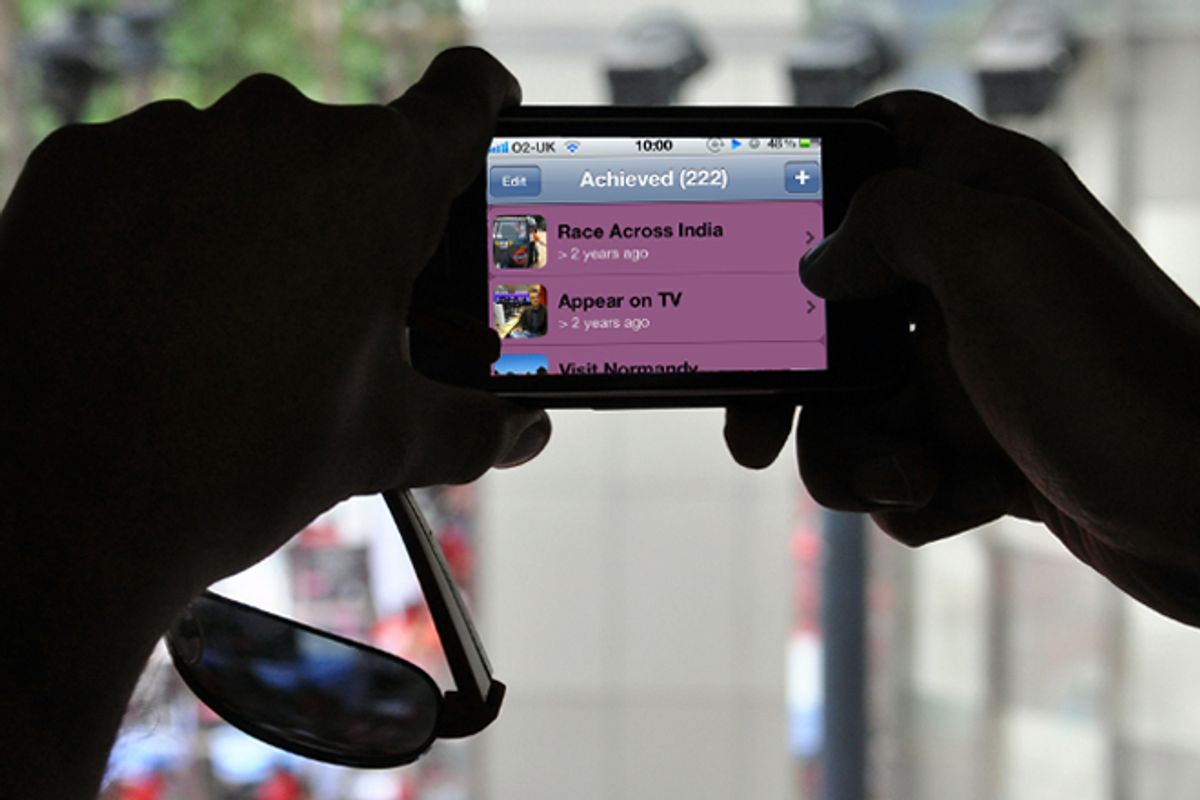 My name is John, and I’m a self-quantifier.

You’re probably asking yourself, “And pray tell, what the hell, is a self-quantifier, exactly?”

This is the part – the explanation – where I’m supposed to demure and look a bit embarrassed, as I downplay it, and pretend that it’s really not even worth talking about. Judging by our Web presence, there are many of us, but I’ve never met another in person, at least not anyone who’s knowingly admitted to it; it’s quite likely they are too publicly ashamed to admit to the geeky indulgence of that obsession that is self-quantification.

Self-quantification is, at its most basic, maintaining performance stats or data about one’s self. With the advent of smartphones and apps that allow for tracking all sorts of activities, for people of a certain mind-set, it’s resulted in the realization that they can easily track a lot of the obscure daily activities that they used to not give much thought to. Lots of people do this to some small extent – tracking their daily spending, or keeping a journal of their exercise schedule, perhaps a calorie diary to help manage their weight – but hardcore self-quantifiers take it to another level entirely. For example, I track both exercise and spending, but on my iPhone I also have specific apps that track the water I drink, sleeping cycles, moods, the last time I communicated with friends, and even activities I’m merely curious about – like how much time I spend watching television (it goes up when “Breaking Bad” is in season). Twenty-four hours a day, seven days a week, my iPhone is pushing, fetching and recording data about myself. Indeed, I even go so far as to have a constantly running timer app that – temporarily, at least – I have to click every time I change activities, with the app providing me with up-to-the-minute reports on how I’ve spent my time.

And now that I’ve just disgusted you and made you roll your eyes at my pathetic wasted life, tapping away on an iPhone to record obscure, unimportant details while the important parts of my life pass me by, I only ask that you at least hear out my defense.

Broadly speaking, self-quantification is simply about trying to become a better person. It’s about trying to exercise a certain amount of self-awareness through data. It’s here that I should probably explain that I’m employed – in part – as a performance analyst for a criminal justice agency. Data allows an organization to measure performance, to observe trends, and to inculcate new habits into the organization.

And I have a news flash for you: Your perceptions of yourself as you casually consider the topic of self are far different – indeed, dynamically different – from what actual data about yourself might show. Consider my mood app. A while back, I considered myself to be somewhat depressed. But when I used an app to record my mood, day by day, it was almost always happy. It turns out that I was simply focusing more on the bad days, and ignoring the good days. A small nuance of perception that quite literally changed my life.

Or, consider the self-delusional explanation I kept telling everyone, that I was working hard on my new book. I believed it myself. Until I started tracking how often I wrote, and realized I was only thinking about writing. Further self-quantification of those periods when I did actually end up writing allowed me to recognize cycles of variable productivity, which in turn allowed me to make adjustments that improved my productivity. (For instance, I learned that there’s no point in writing early in the morning before work if I’m only getting out a couple hundred words onto the page.)

Or, consider the reason for my activity timer. That one, I have to admit, is sometimes a bit of a nuisance. But the hassle at having to swipe two whole fingers onto a screen and tap twice to record the activity changed allowed me to realize how entirely schizophrenic I was in almost every aspect of my life, skipping casually between activities, and in the transition, losing detail and focus. Strangely, the “hassle” of having to swipe two fingers and perform two taps made me live in the present; I could change activities but then I’d have to do the whole finger routine. Furthermore, it revealed that no matter how busy I thought I was – my day filled with work, and writing, and friends, and the activities of being a husband – I still had large unproductive pockets of time. Realizing that better management of this time meant I could take on a new hobby, I started applying to Ph.D. programs.

Most fascinating of all is that the effect of observation itself seems to change behavior. After noticing that I had a rather critical bitter internal monologue about my exterior world, one almost unacknowledged by my conscious mind, I began forcing myself to log each occurrence on my phone. My observation on this stream of negative consciousness made it almost dry up and disappear entirely.

The main criticism of self-quantifiers is that it’s a decadent indulgence of the self. That in a world of self-exclaiming social networks, the last thing we need is to also record data about ourselves. But self-quantifying is anything but indulgent; indeed, it’s about deflating the self, breaching the fantasy assumptions about ourselves that we maintain with steadfast diligence by introducing disruptive cold hard facts, facts that often demonstrate we’re actually not what we thought.

This isn’t for everyone, of course. Though I should add that most of these “performance periods” are only meant to be temporary, dissolved and replaced as needed with new performance stats, once a bad habit has been eliminated, or a positive one formed. Still, for many, self-quantification is perceived as too anal and obsessive-compulsive, expending large amounts of effort for minimal return. People imagine us as having to schedule small social interactions, and maintaining orderly neatly folded drawers of socks. They assume that our need to record our world is manifest of a desperate desire to exert some level of control. I can’t speak for other self-quantifiers, but for myself, my house is usually a mess (registering, on average, a 6.5 on a scale of 10, with 10 being very messy). No orderly sock drawers here. As to attempting to exert some control over my world, this I will admit to. And for myself, a few finger taps every so often as I need to record an event is a minimal cost for a more productive, better, improved me. John Rico, a veteran of Afghanistan, is the author of Blood Makes the Grass Grow Green, and can be reached at bloodmakesthegrassgreen@gmail.com.