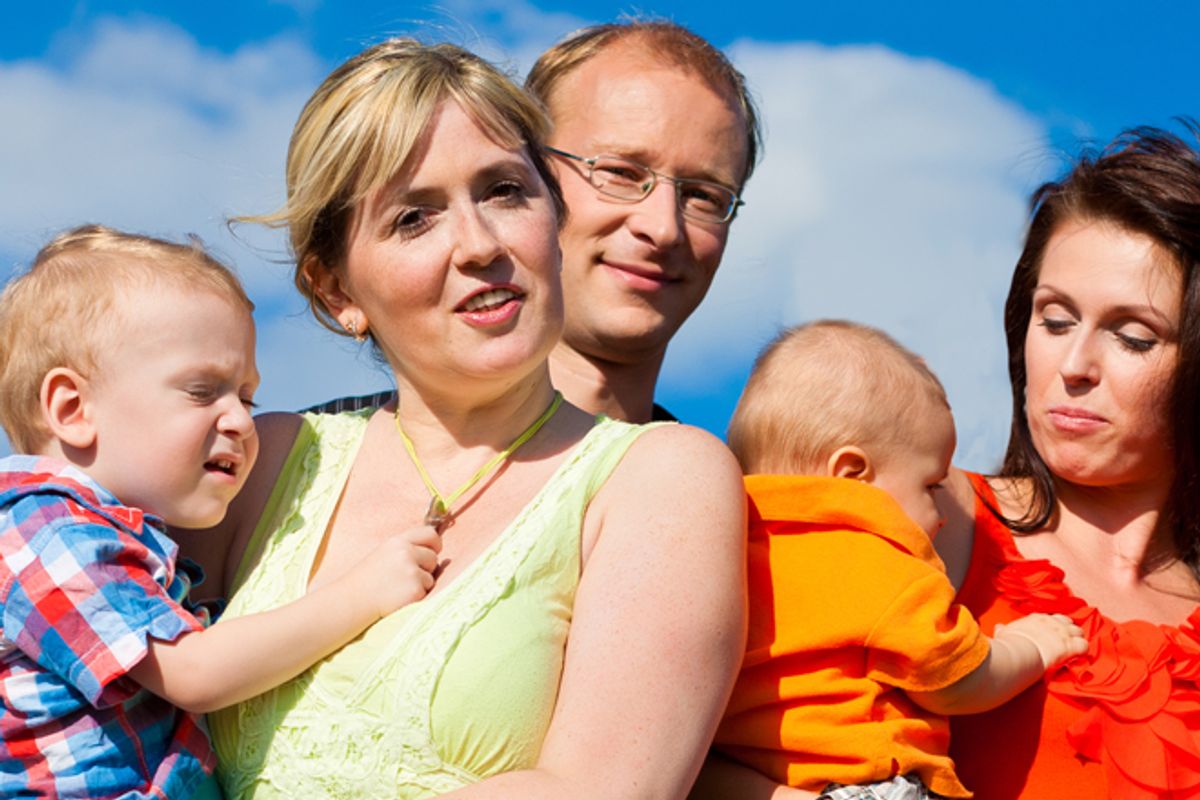 Imagine a lesbian couple that jointly raises a child with the man that helped them conceive, or a father who splits parenting duties with his ex-wife and her new husband. A new California bill, SB 1476, sponsored by Sen. Mark Leno, aims to make it possible for all three, and possibly more, parents in such cases to be legally recognized -- if it's in the child's best interest.

Of course, you put such a bill in the Conserva-Translator and you get: Liberals are trying to destroy the family!

Right-wing commentators have been quick to argue that this is but proof that the push for gay marriage is eroding the family unit. Benjamin Lopez of Traditional Values Coalition told the Sacramento Bee that it was an attempt to "revamp, redefine and muddy the waters" of family structure. On his show Monday, Rush Limbaugh riffed on the measure and, true to form, offered up the classic, "What if somebody wants to marry their pet dog?"

I mean, kids getting to have more than two adults supporting and nurturing them into adulthood? WHAT IS THE WORLD COMING TO?

The bill doesn't change the strict requirements for legal parenthood, it merely removes the two-parent-per-child cap. As the Sacramento Bee explains, "Under current law, a parent can be a man who signs a voluntary declaration of paternity, for example. It also can be a man who was married and living with a child's mother, or who took a baby into his home and represented the infant as his own." The bill just allows more than one father and/or more than one mother to get legal parental recognition.

It's important to note that the measure only applies in cases where broadening the scope of parenthood is "required to protect the best interest of the child," according to Leno. For example, the proposal was inspired by a case where a girl's two mothers became incapable of caring for her and the biological father stepped up to take custody -- but because of the two-parent limit, the court put the girl in state custody.

This is just another case of right-wingers seeing an attempt to make families stronger as an aim to destroy them.