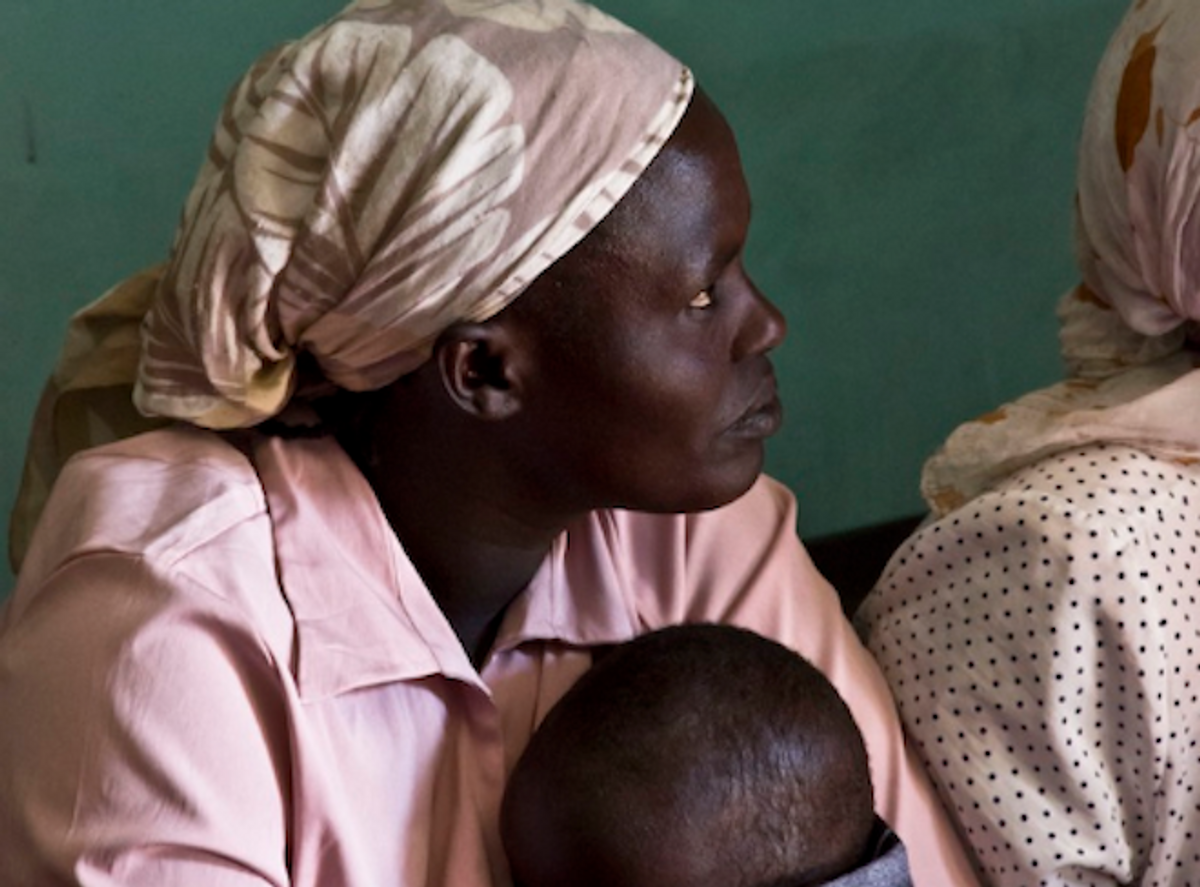 A Kenyan woman visits the Marura health clinic in the district of Laikipia. (Charlott Schönwetter)
--

We weren’t officially there to talk about abortion, but I asked the four Kenyan women in a Laikipia health clinic anyway. Did any of them have friends who had died of illegal abortions?

Three out of the four said they did.

What, if anything, did they think needed to be done? The oldest woman had already fiercely declared abortion to be wrong. “Family planning,” each one replied, by way of a solution. Then one said to the interpreter, quietly, that she had something to add. “Family planning doesn’t always work,” she half-whispered.

Something else, in fact, has been done to address the fact that unsafe abortion leads to 30 to 40 percent of maternal deaths in Kenya, according to one estimate. In 2010, after a heated proxy war fought by both sides of the American political divide, Kenyans approved a constitution that moderately eases the country's abortion restrictions. Whereas abortion was previously allowed only with permission from three doctors – one of whom had to be a psychiatrist, an impossibility in most parts of the country – now a single medical professional can certify that an abortion is necessary for a woman’s life or health, which can be broadly construed. And for the first time, reproductive health is enumerated as a constitutional right.

But what both will mean in practice is very much an open question.

“I don’t expect that overnight, providers everywhere are going to be providing lifesaving abortions,” says Charlotte Smith, director of policy at Ipas, which advocates for safe abortion worldwide and is providing technical support to the government's transition. “I imagine that as in any place that has over 150 years of a very restrictive abortion law, it’s going to take a lot of providers a lot of time to feel that they would be protected,” even if they support abortion rights. Still, Smith says,  “It’s kind of amazing progress if you look at where Kenya has come from.”

Getting the constitutional language alone didn’t come easily. After both Obama and Biden lent their support to constitutional reform, Republican Rep. Chris Smith declared, “This is an administration that is very aggressive in promoting the killing of unborn children and the wounding of their mothers by way of abortion worldwide.” Smith and his American conservative allies charged that U.S. funds marked for civic education around constitutional review were actually illegally advocating for abortion rights and intimidating opponents. The U.S. embassy in Nairobi was unequivocal: “These claims are categorically false, and those making such allegations are lying.” Jay Sekulow’s American Center for Law and Justice, a key architect for the conservative legal revolution, even opened an office in Kenya that year. By way of compromise, the final constitution also included language about life beginning at conception, but church leaders urged Kenyans to vote no anyway.

“A lot of the talking points said by the Kenyan judges and the politicians came straight from the Republicans,” Dr. Joachim Osur, the director for Ipas' Africa Alliance programs, told me, adding, “Some of them were saying that women in the streets would be forced to have an abortion even if they didn’t want to.”

Kenyans I spoke to around the country remain annoyed at the hijacking of the constitutional review process, which emerged as a way of healing after a violent political crisis that killed over a thousand people and displaced hundreds of thousands. Osur went so far as to suggest that abortion was a poison pill, an attempt by vested interests against land reform to take the whole thing down.

“There were a lot of people who did not want change to happen in Kenya,” he says.

He and other reproductive health advocates would have preferred to go through an act of parliament rather than the constitution, but they fought the battle that came to them, with the support of some of the major medical leadership in the country. They, after all, were the ones who had to deal with the women who had “backstreet abortions,” who harmed themselves, who overdosed on quinine intended for malaria patients or on herbal concoctions.

“We medics, we advocate for safe abortion,” Eunice Wanjiku, the nurse in charge at the clinic where I met those four women, told me. On the other hand, she came up with what seemed like a pretext to get as far away as possible from everyone else to tell me that.

And the controversy amounted to a national conversation of sorts. “What this whole fiasco brought about is that for the first time, people discussed the issue of abortion openly,” Osur said. “It helped reduce the stigma around it.”

It was an issue of acute timeliness in a country where 488 mothers die for every 100,000 live births and where unmet need for family planning is estimated at 26 percent for adult women, according to health ministry figures. Dr. Bashir Issak, director of reproductive health at the Ministry of Health, suggested in an interview that in recent years, family planning in general had been sidelined by vertical funding focusing on HIV/AIDS. (The Gates Foundation, which funded the International Reporting Project trip that brought me to Kenya, is on a big push to make family planning a major part of the developing world agenda, including with an international summit in London next week, though the foundation does not take a position on or fund abortion-related activities.)

Meanwhile, eight years of the Bush administration’s enforcement of the global gag rule – prohibiting U.S. funding to any organization that so much as discusses safe abortion, and defunding the U.N. Population Fund (UNFPA) – had a chilling effect on contraceptive access, as family planning clinics across the country closed and preemptively zealous enforcement led to birth control shortages. A Stanford study last year crunched the numbers and found data to support what health professionals on the ground told me several times: The illegal abortion rate in countries like Kenya rose as a result of Republican policies.

Even though the Obama administration has lifted the global gag rule and restored UNFPA funding, groups that get U.S. funding are still hamstrung by the Helms Amendment and the Siljander Amendment, which respectively prevent the funding of abortion or the funding of advocacy for safe abortion. In practice, this can lead to some contortion.

Take Kisumu Medical and Education Trust, which I visited recently. It was ineligible for U.S. funding under the Bush administration because it works on comprehensive reproductive healthcare – from adolescent health to advocating for safe abortion access to caring for women who have had unsafe abortions. Under Obama, they’ve gotten a U.S. government grant to improve the services of 650 healthcare providers when it comes to infectious diseases like malaria and HIV. “But we are not allowed to spend any of this money on anything related to post-abortion care or abortion,” said  director of programs Sam Owoko. “You have to separate the room where you’re doing post-abortion care and the room where you’re doing everything else,” and, he said, even have a separate set of tools, no easy task when resources are already so scarce.

Frustrated reproductive health professionals have pointed out that the same commodities USAID won’t fund because they can be used for elective abortion – manual vacuum aspirators, Misoprostol -- are the ones recommended for lifesaving post-abortion care or postpartum hemorrhage. Every year, roughly 20,000 women are treated in public hospitals for abortion-related complications – as health professionals are required to under Kenyan law -- and that doesn’t count the ones who go to private facilities or who never make it to a hospital.

Some of those MVAs and pills are, of course, already quietly being used for safer abortion in remote clinics around Kenya, as was quite plain on my visits to health facilities. Some of these providers are simply opportunists, like the high-earning illegal abortion provider in a Nairobi slum visited by two of my colleagues on the trip. (He enforces his own informal restrictions that sound a lot like laws that have been passed or attempted in the U.S.: no married women without permission from their husbands, and no schoolgirls without permission from their parents.)

Others clearly feel as Osur does: “I do not think it is morally right to wait for women to start the abortion at home and wait for them to start bleeding so you can finish the job at the clinic. I don’t see any morality in that.”