Nigeria: Rebel without a job

Nigerian militants, who gave up fighting foreign oil companies in exchange for skills training, now have no jobs 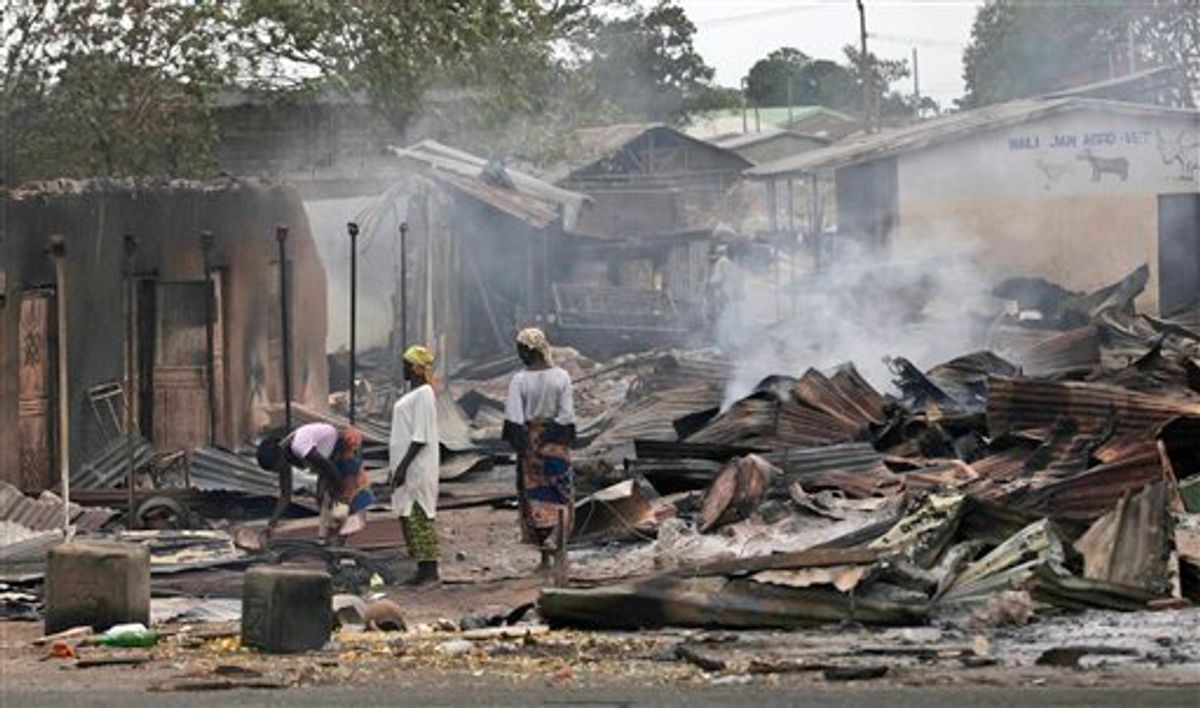 Women look for useful goods at the burned Zonkwa Market in Kaduna, Nigeria, Thursday, April 21, 2011. Nigerian officials on Thursday delayed next week's gubernatorial elections in two predominantly Muslim northern states that have been wracked by deadly riots and retaliatory violence since the presidential election was won by a Christian from the country's south. (AP Photo/Sunday Alamba) (AP)
--

WARRI, Nigeria — The young rebel fighters that once terrorized Nigeria’s oil industry are back, this time armed with an education and ready to work.

The “boys,” as they are known, violently sabotaged oil production between 2003 and 2009 by attacking pipelines and kidnapping foreign workers to protest what they called the theft of Nigerian natural resources by international oil companies. But as part of a peace deal with the government, more than 26,000 young men eventually exchanged their weapons for job training and some financial support.

Many of them were schooled abroad in skills like carpentry, underwater welding, crane operation and other skills.

Capt. Mark Anthony, the spokesperson for one of the former militant groups, however, said it wasn’t enough.

“We are not paper tigers. They know what we can do,” he told GlobalPost during an interview at his lawyer’s office. “We know ourselves, we know our strengths.”

Anthony said that unless the Nigerian government financially compensates fighters and other communities, his boys are ready to return to battle. He said weapons and soldiers are at the ready — but he won't say how many.

It’s impossible for an outsider to tell if the captain’s bravura portends an imminent attack or if it’s a strategic threat. But as thousands of “boys” return to the Niger Delta from their job training, many are left wondering if the region's fragile peace will fall apart.

Nigeria is Africa’s most populous nation and largest oil exporter. It’s the fifth-largest oil supplier to the United States, with companies like Royal Dutch Shell, Chevron and Exxon-Mobil shipping the easy to refine crude oil directly to America’s East Coast.

The cause of the battles that once raged on the creeks and rivers of the Niger Delta — poverty and corruption in a land awash with natural wealth— has not been resolved. And it’s not just the “boys” who are angry.

Amnesty International reports that foreign oil companies continue to rake in huge profits from Nigeria’s natural resources, helped along by corrupt officials and weak governance. Meanwhile, average people in the Niger Delta live on less than $1 a day and lack access to electricity or transportation other than dug out canoes. Oil spills, too, have poisoned much of the water and decimated the fishing and farming industries.

Many officials and activists here said they don't blame the young militants for fighting for the rights to the Niger Delta’s resources, even as they condemn the violence and hope it remains a thing of the past.

Some of the now-skilled former soldiers, however, say they don’t want to go back to the creeks to fight. They just want jobs to help them develop the region.

Kalos Gas, 26, was once a gunman on a boat. He is now a trained welder looking for work. He said that no matter what happens, he wouldn’t go back to war. If the amnesty program breaks down, or stops supporting the boys when its mandate ends in 2015, he hopes peace can somehow be maintained even if many are still out of work.

“I don’t know what will happen,” Gas said as he eagerly laid out his training certificates on the coffee table. “Some people are making noise. But we’ll not pray for that. We’ll pray for everyone to be silent.”

Other former militants are less hopeful. A room full of former rebels who recently completed job training got rowdy when the prospect of finding a job — something few have achieved — came up.

“We don’t want to go back to the creeks. We want to work,” said one young man with an anchor pendant around his neck. “If there is no work then we will have no choice.”

The young men generally agree with this statement, but they seem more focused on finding a job than preparing for renewed conflict. They complain that the amnesty program is often inconsistent and corrupt. Some former rebels have received promised payments, they said. But officials in charge of the money often steal the payments of others.

Nigerian authorities say that any suggestion of renewed violence is alarmist. They say that young men like these, with job skills and who are fully aware of the dangers of war, are unlikely to want to fight again.

The amnesty program was designed to be sensitive to the needs of the people, said Lt. Col. Onyema Nwachukwu, media coordinator for Nigeria’s security forces in the Niger Delta. Its success is evidenced by the fact that waterways that were once a war zone are now relatively safe, he said.

Security forces once tasked with fighting militants are now responsible for protecting Nigeria’s oil resources, he said. They monitor the waterways, punishing criminal behavior — sometimes with the help of former militants who are participating in the amnesty program.

“We are seriously carrying out aggressive and robust patrol of the waterways,” Nwachukwu said. “We’ve had clashes and fire fights and combat with sea robbers and a number of pirates.”

Nwachukwu said none of the 86 people who have been arrested for working in the illegal oil trade this year — an activity that was once known to fund the militant groups — have been former soldiers associated with the amnesty program.

Lucky Daniel, the former chair of the National Youth Council of Nigeria, lives in oil-rich but cash-poor Bayelsa State. He said the government's amnesty has offered hope for some young people, but others have been left behind. The boys sent abroad for training are the lucky ones, he said, even though most can't find work.

“We have no industries at all. No companies. Nothing to absorb those that come back when they have been trained," Daniel said. "And then … what about the rest who are still loitering in the creeks?”