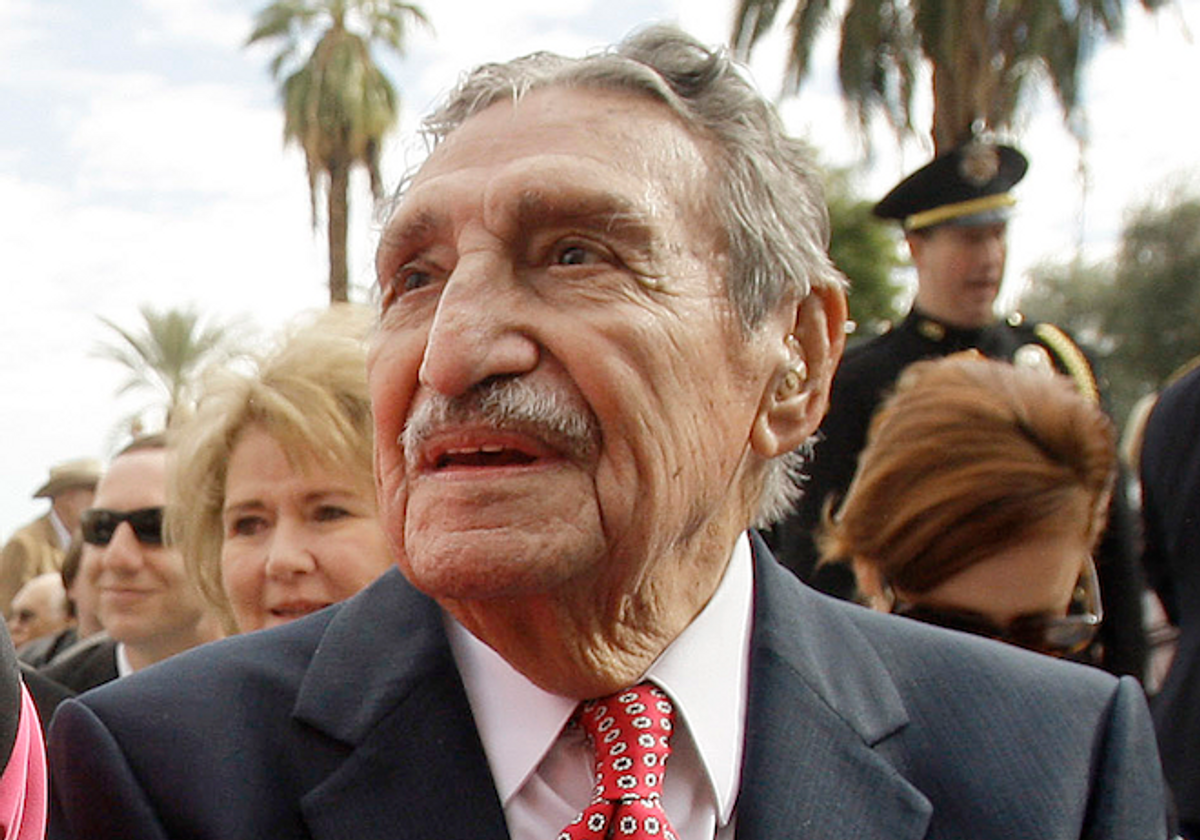 "It's not like I'm a gangbanger who was going to run away," Castro tells Salon. (AP Photo/Ross D. Franklin)
--

What started as a "ridiculous" Border Patrol incident along Interstate 19 in southern Arizona may be spiraling into a full-scale public relations debacle for a border security gone awry.  Nearly three weeks after former Arizona Gov. Raúl Castro triggered a checkpoint's radiation security system on June 12, the story of the 96-year-old's brief but disturbing detainment in the brutal Sonoran Desert heat for more than a half-hour has spread from a local newspaper commentary to national news.

But there's more: This was the third time such an incident has happened to Castro, who was elected in 1974 as the first (and only) Mexican American governor of Arizona.

"I've worked on immigration matters all of my life, as an ambassador, a governor and on the border," Castro told me in a phone interview from his home in Nogales, Ariz. "But this was really bad judgment."

An outspoken opponent to Arizona's controversial SB 1070 "papers please" law,  Castro recalled the other two times he had to fend off stumbling Border Patrol efforts.

Nearly half century ago, working on the front fence of his Tucson horse farm in his work clothes, Castro was stopped by a passing Border Patrol car. The agents asked if he had his work card. Castro said no. When they asked whom he worked for, Castro referred to “the señorita inside.” The agents nearly arrested Castro until he showed them the sign by his farm entrance: “Judge Castro.” A former Pima County prosecutor, Castro had become the first Latino Superior Court justice in the state in the 1960s.

“I once had a home in San Diego," Castro said. "One day my daughter and I returned and were stopped by Border Patrol. ‘Hey, where were you born? I wasn’t about to lie. I was born in Mexico, I said. The guard starts questioning me. ‘What about that young lady?’ She was born in Japan, I said, during the Korean War. He thought we were being smart. He didn't want to let us go.  In the meantime, someone came by and recognized me. Governor, how are you?”

Writing in the Nogales International, Castro's friend and driver Anne Doan triggered the media interest in Castro's recent Border Patrol fiasco with a commentary that described the "appalling" and "humiliating" treatment of the elder statesman last month.  En route to a planned birthday party for the 96-year-old icon in Tucson, Doan and the frail Castro were forced to exit their vehicle at the Tubac, Ariz., checkpoint in near 100-degree weather when Castro's earlier medical treatment for his pacemaker set off the checkpoint's radiation system. Despite Doan's pleas for Castro's health, the Border Patrol insisted he waited outside without air-conditioning.

"They knew it was the medical procedure that was coming up on their radar," Doan wrote, describing the Border Patrol's apparent indifference to Castro's earlier treatment at Tucson Heart Hospital.

While Castro has refused to scold the Border Patrol for any apparent discrimination or profiling, he again rebuked its "poor judgment," considering the possible health concerns for the elderly in the summer heat.

Doan was less charitable in her Op-Ed:

"This is the anger that exists with that checkpoint. We residents understand why it is there, but are reminded every day at how wasteful and ineffective it is. I am sorry, but in America, Americans should be able to drive from one city to the next without being detained and questioned by other Americans simply to file paperwork."

This incident comes on the heels of the Supreme Court's recent split decision on the state's notorious immigration law, which still allowed the "papers, please" provision of the law to stand. Meanwhile, apprehensions of undocumented entries have plummeted to the lowest level since Castro was governor of the state in 1974.