Put an octopus on it!

Forget birds: Occupiers and Etsy hipsters have reclaimed the octopus, once a symbol of corporate domination 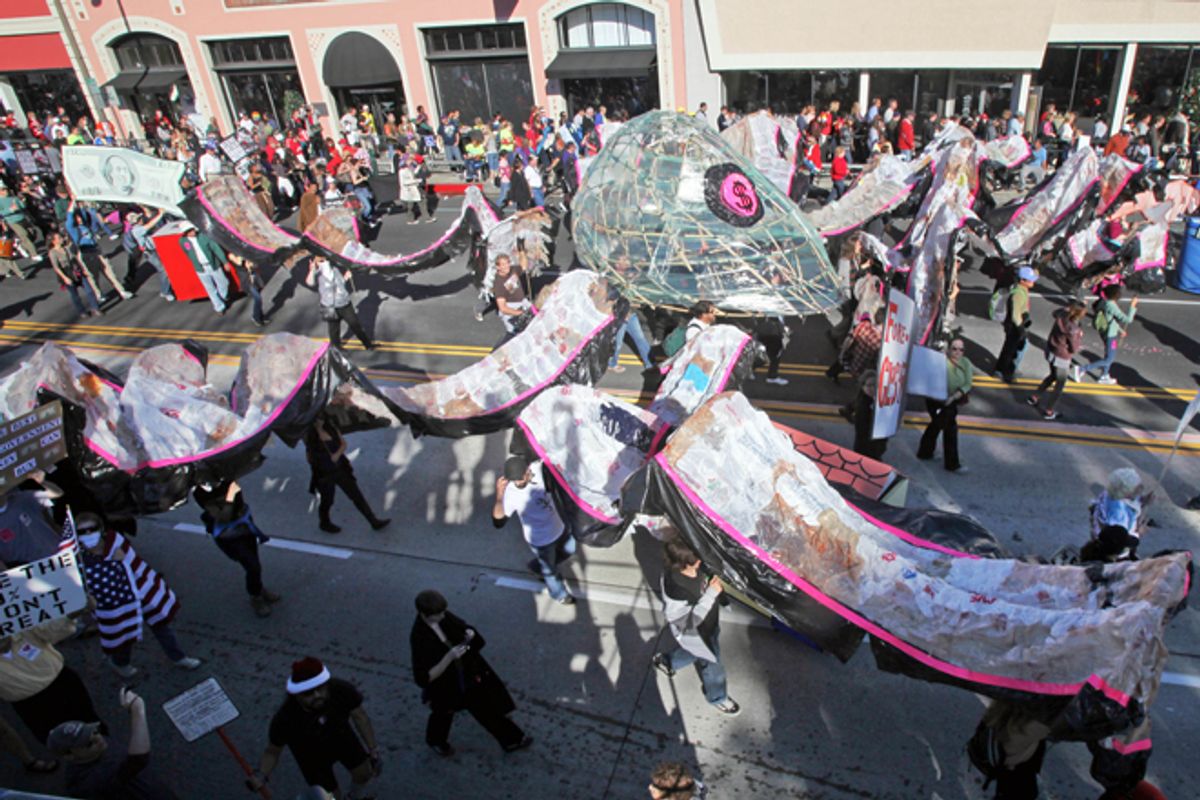 "Put a bird on it" is so last year. These days, the smarter "Portlandia" reference would be "Put an octopus on it."

Search Etsy.com, the handmade goods marketplace, for “octopus” and “squid” products and it yields over 17,000 items ranging from jewelry and silk-screened T-shirts to decorated pantyhose and hip flasks. Squids and octopuses are the creatures most frequently depicted attacking things like ships, submarines, bridges and scuba divers. Worn as talismans on medallions, rings, tattoos, knitted caps, belt buckles and clothing, they invoke qualities such as flexibility, adaptability, cunning, camouflage and hostility to traditional forms of commerce.

The electronic punk band Atom and His Package has written an enigmatic song about this obsession with obscure cephalopods: “Octopus. I love you. It hurt./ I can’t think of another animal I’d want on my T-shirt.” But while the birds in that famous "Portlandia" sketch were merely a cute affectation on T-shirts, the octopus has political implications. So how did cephalopods become so beloved as icons of the creative class -- and a growing image of the Occupy movement?

Handmade octopus T-shirts seem especially odd when contrasted with earlier cephalopod images inspired by the 1882 cartoon that popularized the image of the corporate octopus squeezing life out of farmers, miners, vintners and other California enterprises. Published in the Wasp, a satirical San Francisco weekly, G. Frederick Keller’s caricature of the railroad monopoly sparked a wave of cartoons likening monopolies such as Standard Oil and the Southern Pacific Railroad to cephalopods. The metaphor of the corporate octopus occasionally reemerged in 20th-century propaganda: Hitler invoked it in an anti-Semitic denunciation of “Jewish global finance” in "Mein Kampf," for example, and Allied forces depicted Japan as an octopus snatching up Asian territories.

How did we go from hating octopuses to wearing them? The octopus — once depicted as an unnatural figure of centralization and greed — has become a metaphor for creative resistance to technology, modernity and capitalism? Two things can help us understand this shift in the meaning of the cephalopod: what we’ve learned about octopuses and squids, and historical shifts in the structure of global capitalism.

Long before Keller’s “Curse of California,” sailors experienced cephalopods as marvelous and harmless forms of life, not as life-destroying monsters. For Herman Melville, the giant squid briefly eclipses even the sublime figure of the white whale:

Almost forgetting for the moment all thoughts of Moby Dick, we now gazed at the most wondrous phenomenon which the secret seas have hitherto revealed to mankind. A vast pulpy mass, furlongs in length and breadth, of a glancing cream-color, lay floating on the water, innumerable long arms radiating from its centre, and curling and twisting like a nest of anacondas, as if blindly to catch at any hapless object within reach. No perceptible face or front did it have; no conceivable token of either sensation or instinct; but undulated there on the billows, an unearthly, formless, chance-like apparition of life.

In the 20th century, close-up encounters between cephalopods and divers added detail to such wondrous sightings. For example, hearing that octopuses collect attractive rocks and shiny items — like curators of a cabinet of curiosities — inspired Ringo Starr’s 1969 song “Octopus’s Garden.” In "Octopus and Squid: The Soft Intelligence" (1973), undersea explorers Jacques-Yves Cousteau and Philippe Diolé describe octopuses in aesthetic terms as “The Builders of the Sea,” “A Marine Marvel,” dancers of “An Underwater Ballet” and “The Most Beautiful Creature in the Sea.” Octopus’ “gardens” turn out to be dwellings whose bricolage reflects their immediate surroundings: “Their architecture has a great variety of forms, and there is a large assortment of models which reflects the nature of the building materials available locally.”

Cousteau and Diolé detail how octopuses communicate, dance, play, hunt, camouflage themselves and even problem-solve. Here is their description of an octopus confronted with a lobster sealed up in a jar:

When it saw that the usual approach was useless, it abandoned that tactic and began exploring the object that had come between it and the lobster. It realized that the object was not uniform; and it discovered the presence of the stopper, and the existence of the hole in the stopper. It may have sensed that this was the weak point in the obstacle, since it was through the hole that the lobster was able to be touched…. Then [it] realized that the stopper could be moved—and it moved it.

Scientific knowledge has undoubtedly contributed to the general shift in attitude toward cephalopods: Such brilliant, beautiful creatures seem to have nothing in common with the capitalist greed depicted in 19th-century satires of railroad monopolies. Yet the particular qualities associated with cephalopods’ “soft intelligence” — bricolage, adaptation, morphing, fluidity, flexibility, and creativity — are made to order for the contemporary economy.

Creativity, independence and flexible work conditions are especially valued in jobs associated with the service sector and the information economy bolstered by capital investment in the wake of deindustrialization. High-tech companies both draw on and reinvigorate the cultural capital of cephalopods: Laughing Squid has been an Internet design and Web-hosting company since 1997 (its founder, Scott Beale, explains that “multiple tentacles would be a metaphor for all of the various things I wanted to do with the company”; the Williamsburg-based blog Aesthetic Octopus updates a list of eight indie bands dubbed “The Royal Tentacles”; you can buy an “Octopus” USB hub, procure Web-hosting services from Octopus Computer Solutions, or speed up your Internet connection by using the Squid caching proxy server.

No wonder Jaron Lanier — computer scientist, composer and coiner of the term “virtual reality” — loves cephalopods. After bitterly criticizing how corporations have harnessed the Internet in the service of a standardized and uncritical “open” Web culture, "You Are Not a Gadget" turns to cephalopods as an analogy for more transformative interactions between humans and high-tech. Calling cephalopods “the strangest smart creatures on Earth” and citing their ability to “think in 3-D and morph, which would be fabulous innate skills in a high-tech future,” Lanier describes how these skills play out in vivid detail:

The cuttlefish responds with a bizarre and ingenious psychedelic performance. Weird images, luxuriant colors, and successive waves of what look like undulating lightning bolts and filigree swim across its skin. The sight is so unbelievable that even the crab seems disoriented; its menacing gesture is replaced for an instant by another that seems to say, ‘Huh?’ In that moment the cuttlefish strikes between cracks in the armor. It uses art to hunt!

This is virtual reality (and what Lanier calls “postsymbolic communication,” a way of conveying meaning and mood directly with the body, not words) not as a technological prosthesis but as a mode of being, an innate survival strategy. But it is also an instance of the instrumentalization of aesthetics — using art to hunt.

Lanier’s comments bring us full circle from the qualities of cephalopods to those flexible, mobile, resourceful young people who silk-screen them on clothing, sell and shop for them online, and wear them as symbols of resistance. Hipsters are the other “strangest smart creatures on Earth,” who shy away from punching the clock, adapt the husks of devalued buildings as their homes, plant gardens in abandoned lots, contribute to the information economy, and use arts and crafts — if not to hunt, then to enhance cultural capital and real estate values. Hipsters thrive on the post-industrial economy, not only by fulfilling its demand for highly adaptable, flexible workers, but also by increasingly using the Internet to access new tastes and trends that signify resistance. Today’s creative class may hide in old warehouses and repurposed lofts, but their presence often paves the way for real estate developers interested in redeveloping devalued neighborhoods. A prayer distributed in 2004 by Hasidic Jews protesting rising rents in Williamsburg claims that hipsters (at least unwittingly) cooperate with the predatory interests of landlords and real estate developers: “please remove from upon us the plague of the artists, so that we shall not drown in evil waters, and so that they shall note come to our residence to ruin it.”

This is not to join the chorus of articles criticizing the hypocrisy, trendiness and consumerism of hipsters  — something already eloquently accomplished in documents such as Christian Lorentzen’s “Why the Hipster Must Die,” Douglas Haddow’s “Hipster: The Dead End of Western Civilization” and several commentators in n+1’s "What Was the Hipster? A Sociological Investigation," but to consider what the reemergence of cephalopod images can tell us about the rise of contemporary hipsters. Why is “squid” a key word on Hipster Ipsum, a website that automatically generates stereotypically “hipster” prose? If hipsters and cephalopods are both figures for the generalized adaptability demanded by today's economy, then the cephalopods we see on T-shirts, tattoos, murals and the like indicate that capitalism can no longer be associated solely with greedy corporations and monopolists.

In post-industrial American cities, capitalism insinuates itself more than ever into creative endeavors and subcultural social networking. Capitalism’s tentacles seize not only resources and manual labor, but also individual qualities such as sensitivity, flexibility and versatility. Those who live out social experiments at the margins of the economic system should consider the paradoxical caveat expressed in these lines from Italian poet Eugenio Montale’s “Indian Serenade”: “The octopus that works/ inky tentacles among the shoals/ knows how to use you. You belong to him/ unwittingly. You’re him; you think you’re you.”

But there's one more twist. The Occupy movement’s recent revival of Keller’s anti-corporate octopus marks a turning point in the social positioning of educated, young and versatile urban residents liable to be viewed as “hipsters.” Faced with an economic downturn and an outrageous, increasing gap between the very wealthy and the “99 percent,” hipsters can no longer fall back on middle-class safety nets, the ready availability of flexible employment, cultural capital or the postponed promise of upward mobility to save them from underemployment and substandard housing.

Cephalopod-themed performances such as the “Octupy” puppet performance at Los Angeles’ city hall on Nov. 20, the squid-themed march on Goldman Sachs on Dec. 12, and the 70-foot octopus float that Occupy protesters carried at the 2012 Rose Parade signal a renewed hostility to corporations; yet the Occupy movement itself leverages the amorphous, flexible qualities of cephalopods and today's capitalism — social networking, loose coalitions, temporary encampments, and guerrilla tactics — to combat the corporate squid. Can the flexibility, resourcefulness and decentered organization required by modern capitalism be used to dismantle corporations and the state violence that sustains them? Can the versatility associated with cephalopods animate collective political action as well as individual creativity? If so, then perhaps we must all become part cephalopod to transform the capitalist world system; and in that case, those images of squids and octopuses wrestling with ships may be a step toward tearing down the system after all.