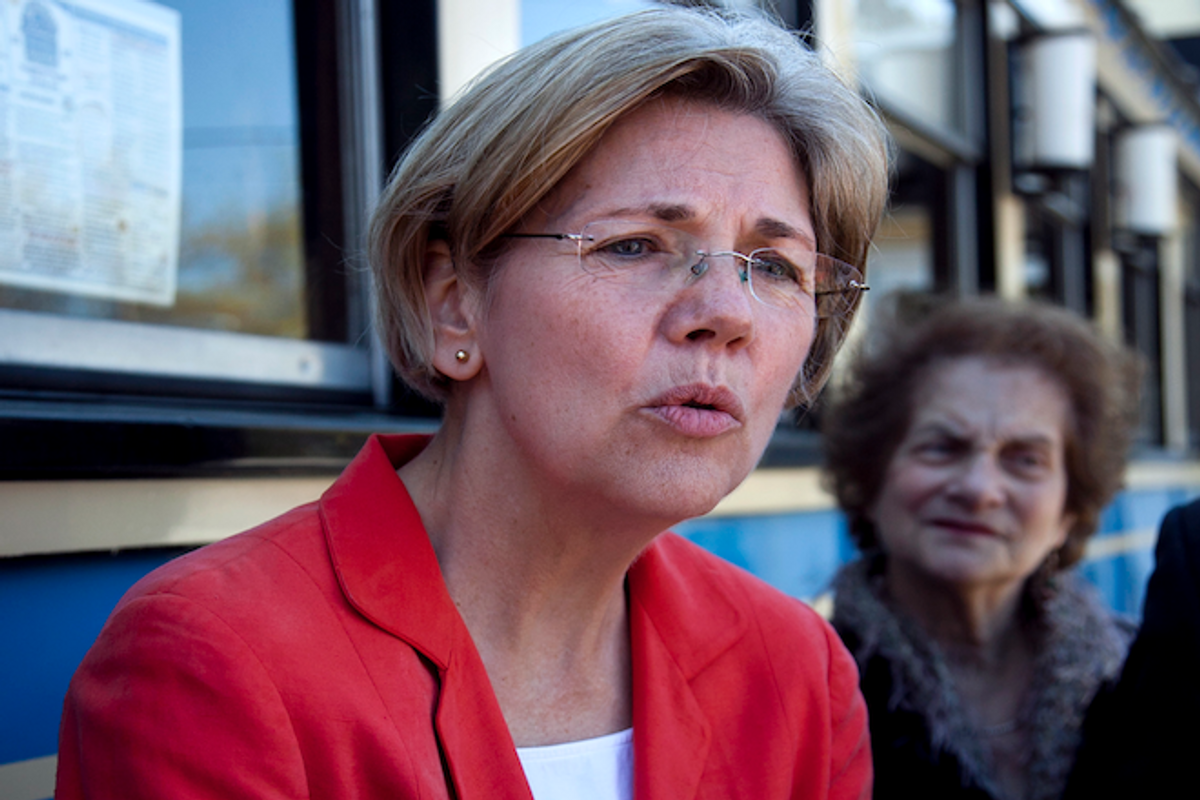 Elizabeth Warren is choking up. She calms and collects herself. “Yup,” it’s time to end the interview. She has been describing the burden she bears as a candidate and how heavy it sits on her shoulders. The 63-year-old Democratic nominee for the U.S. Senate in Massachusetts was describing in particular the needs of a married couple she met. The wife was caring for her husband, Jack, who was suffering from Alzheimer’s. He spent four days a week at a center that receives federal funds. She came to Warren expressing her concern about what might happen if it lost federal funding. She said “if they lose their funding, I lose my Jack. I’m here because I figure you’re his best hope.” Warren managed to get half of her next sentence out “I think about her every ...” until she could go on no further.

Since hitting the national stage in 2009, Elizabeth Warren has become a strange amalgamation of Barack Obama and Sarah Palin, combining Ivy League smarts and a down-home folksy touch — she jokes about “my old Methodist preacher roots” — to fire up an intensely loyal partisan base. Like both Obama and Palin, she has become a national political figure seemingly overnight, being catapulted from a distinguished, if somewhat obscure, academic to a subject of speculation as a 2016 presidential candidate. The difference for Warren is she has never run for office before. While being an amateur candidate presents certain advantages — she never gets finicky about campaign miscellanea like parades or yard signs and can calmly dismiss the first iteration of her campaign website as “really kind of dorky” — it also brings distinct disadvantages. After all, she had never before asked a total stranger for their vote.

Warren is a Harvard Law professor who is one of the leading authorities in the academic study of bankruptcy and commercial law. Her long-standing advocacy for financial reform propelled her to heading a congressional oversight panel on TARP. That position gave Warren a bully pulpit to successfully advocate for the Consumer Finance Protection Bureau, the creation of which she oversaw from a perch in the Obama administration. However, congressional Republicans objected to her heading the new agency that she had shaped. It also established Warren as a liberal icon at precisely the same time that Democrats in her home state of Massachusetts were scrambling for a candidate to take on Republican incumbent Scott Brown.

Tuesday was a hot summer day in central Massachusetts and Warren is taking a break from the campaign trail by stopping for a cupcake and a lingonberry iced tea (she’s trying it out of curiosity) at a coffee shop in Holden, Mass. As staffers note, it’s a change of pace from her normal campaign fare. She’s normally fond of McDonald’s Filet O’ Fish or a Taco Supreme, hold the sour cream, from Taco Bell. (Apparently, she has tried Taco Bell’s new Doritos-based taco but is not a fan— she finds it too salty.) The day before, Brown had taken a shot at Warren’s skills on the hustings, comparing her unfavorably with Martha Coakley, his much maligned opponent in the 2010 special election for Ted Kennedy’s Senate seat. Although early in her campaign Warren came across as a somewhat awkward and diffident campaigner, things have changed and she now has the political zeal of a happy warrior.

She apologizes for the corniness of the sentiment but maintains that she “really do[es] get goosebumps at different moments during the campaign.” In fact, Warren even claims to be one of the rare politicians who enjoys making fundraising calls, protesting that “I like call time. I do!” To her, it’s “a chance to hear from people on a one on one basis.”

In the flesh, Warren seems to crave physical contact with voters. She greets everyone with “glad to see you” and combines a handshake with a shoulder pat. Even with those wearing gloves, she goes for a fist bump or, if that’s not possible, an elbow bump. In summarizing her experience campaigning, she mentions “ do[ing] pinkies with 4-year-olds” in the same breath as talking about Medicare with seniors. Congressman Jim McGovern, who accompanied Warren on the trail all day, goes so far as to call Warren “a natural.” He marvels that she seems to be “totally at ease” meeting voters, which McGovern contrasts with his own awkwardness when he first ran for office. While glad-handing with voters in a park before Fourth of July fireworks in Worcester, Warren even manages to deftly snag a Dorito from two undecided voters, Steve and Toni St. Germain, who are camped out on lawn chairs with their kids waiting for the festivities to start.  (Apparently Warren is more fond of Doritos as chips than when in taco form.)

This is not to say that Warren’s every interaction with voters is a model of political skill.  At a chicken barbecue in Rutland, a relatively conservative Worcester bedroom community, she meets an elderly woman, wearing an AARP fanny pack. She tries to connect the fanny pack with the fact that AARP was behind her work in Washington with the CFPB, using acronyms for both organizations. Somehow the woman is not quite impressed.

She also hasn’t quite managed the fine art of letting awkward comments slide by. After walking away from meeting one burly voter who promises his support in November, Warren hears him call out loudly that he’s a former libertarian, apropos apparently of his political journey toward backing her. She turns around, offering the voter a thumbs up and a plastic sardonic smile that seems better suited for a Mentos commercial than the campaign trail.

Aside describing her experience as a candidate, Warren also weighed in on the Supreme Court’s decision finding most of the Affordable Care Act constitutional for Salon. For a law professor she seemed surprisingly unconcerned about the myriad legal issues in the 193-page decision. To her, all that matters is “they ruled it constitutional; that’s it,” she says while wiping her hands together, signifying that the issue is done with. Of course, it isn’t, as she takes pains to distinguish her support for healthcare reform in contrast to “Scott Brown, Mitt Romney and the Republicans who want to throw it all out.”

She is more concerned about whether the mandate is considered a penalty or a tax. To her, it’s a “question not about rhetoric but it’s about the Republican efforts to repeal it.” After all, if it’s a tax, it means it can be repealed via the reconciliation process in the Senate with only 51 Republican votes — a threshold that will be almost impossible for the GOP to attain if Warren wins. She says, “If [the Republicans have] majority control in the House and the Senate they say they can repeal it, the Affordable Care Acts. That’s a way of saying intensely the outcome of this election really matters.” “Underline with your voice,” she emphasizes, “really matters.”

The Harvard Law professor does delve into constitutional law about the portion of the decision where the court found the expansion of Medicaid in the Affordable Care Act to be partially unconstitutional. She found it “pretty shocking” that seven justices would create a “new limitation on congressional power to condition spending.” Later, she rolls her eyes when it is mentioned that her former colleague Elena Kagan was one of those seven.

The fact that she refers to this Supreme Court justice as “Elena,” no last name needed, is a reminder of both the electoral advantages and disadvantages that her career as a Harvard Law professor offers. It does make it easy for her to be pigeonholed as a well-to-do Cambridge liberal. One voter at the fireworks display in Worcester, Bob Murray, a burly bearded man in a NASCAR cap, is able to recite her precise salary from Harvard, $380,000, in disgust. Needless to say, he’s also one of many voters who raise the current cause célèbre in the race over whether Warren actually has Cherokee ancestry as she claimed and, if she used her supposed Native American ancestry to benefit from affirmative action programs as a minority. In a state with a nasty history of busing and racial tension, combining Cambridge liberals and affirmative action is pretty politically loaded.

Yet being a law professor does offer her a certain advantage. Law school is taught via the Socratic method. Instead of through lecturing, professors prod the lecture material out of students via constant questioning. Warren describes it as “very interactive, it’s about listening and thinking and encouraging the partner in this conversation to think." She views the campaign as an extension of that, “a place to have a bigger conversation ... about people’s lives [and] what’s happening to people up close and personal every day.” To her, “Socratic dialogue has been the perfect setup. If I couldn’t hear what people were saying to me, I wouldn’t be the right candidate. This is about hearing people, it’s about hearing why they care so much about the outcome of this race and that’s been the really powerful part of the race.”

She does differentiate her technique from another law professor in politics, Barack Obama. “I think of the president as someone who comes from a background of community organizing, which is somewhat different” says Warren. “And I think of myself not as a professor but as a teacher.” Like Obama, though, she does see the campaign as a collective effort. When a young man comes up to her and says he follows her posts on Facebook, Warren earnestly tells him, “You’re part of this campaign.” In fact, in her eyes, the campaign is “really not” about her. Instead, “this race is about all the people who invest in it.” But that’s where the pressure comes from.

Warren says this is “the hardest part of the race ... I know I carry the hopes of a lot of people. And I feel this sense of deep responsibility I’ve got to get this right and this is the part that keeps me up nights.” In fact, she says she thinks about the people she feels are depending on her “before my eyes are open in the morning; I’m still thinking about them when I close my eyes at night. I wake up at 3 a.m. almost every morning and think about someone I met that day.”