People are suspicious of Obamacare in the abstract, but when it gets to the specifics they tend to like it a lot 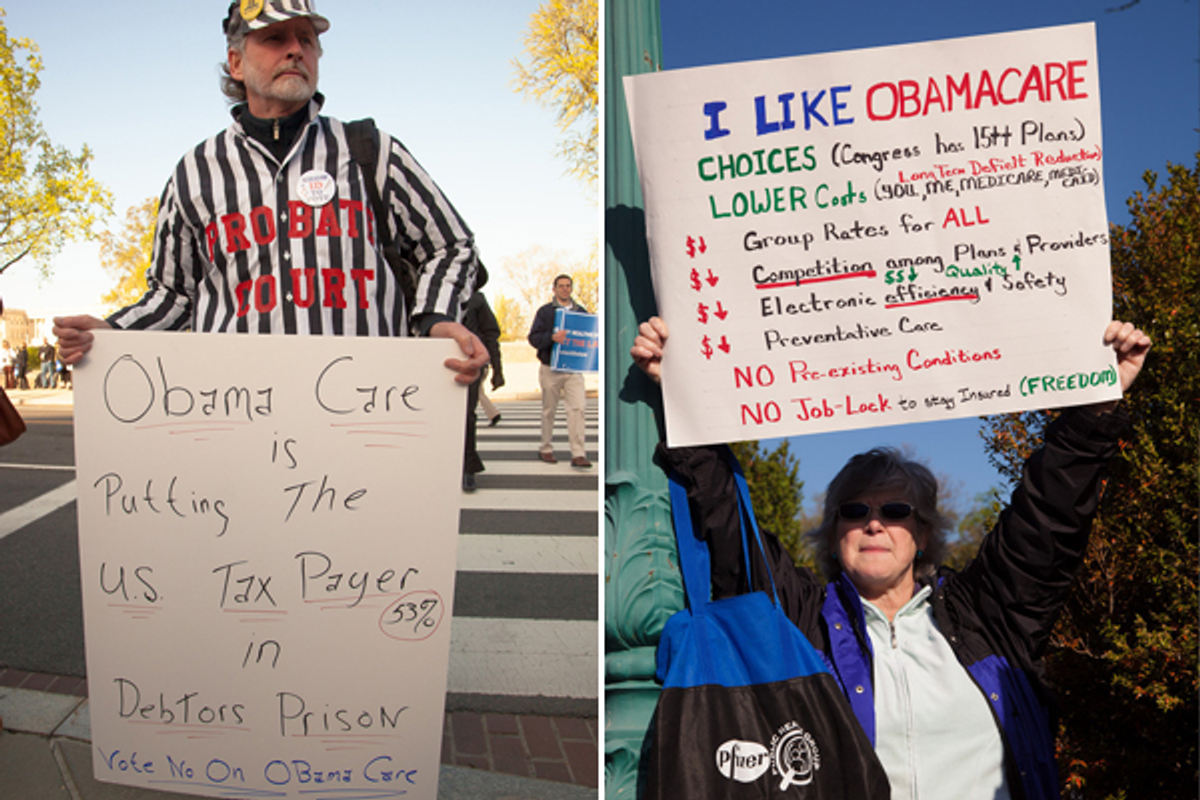 There are two Affordable Care Acts. There's the legislation passed by Congress in 2009, and then there's the mythical Affordable Care Act – the perfidious “government takeover” decried and demagogued by so many conservatives (and quite a few liberals). The former is quite popular, the latter gets decidedly mixed reviews.

Don't take my word for it. A recent poll by the Kaiser Family Foundation found Americans split down the middle, with 41 percent approving of the law, and 40 percent saying they didn't like it (PDF). But then Kaiser asked about 12 specific provisions in the legislation, and found that, on average, 63 percent of respondents approved of the nuts and bolts of Obamacare. Of the 12 measures they tested, only one – the controversial mandate to carry health insurance or pay a penalty – received the approval of less than half of Americans (35 percent).

Or consider this divide: while only 12 percent of Republicans had a positive view of the law overall, 47 percent, on average, viewed its specifics favorably.

And here's the kicker: Kaiser found that the most popular parts of the law were also the ones most Americans weren't aware of, and vice-versa. Almost everyone knows about the mandate, which most people don't like, but fewer than half of those polled knew about the law's tax credits for small businesses that offer their employees coverage, a provision that eight out of 10 people liked when they heard about it.

None of this should come as a surprise, given the level of mendacity of the law's opponents. If the Affordable Care Act did in fact feature “death panels,” resulted in deep cuts to Medicare, represented a "massive” tax increase and “Sovietized” our healthcare system, nobody would support it. Fortunately, none of that bears any resemblance to reality.

Obviously, the law should be judged on what it actually contains, but according to Kaiser, six in 10 say they don't have enough information about the details to understand how it will impact them personally. So here, in no particular order, are 10 things you may not know about the Affordable Care Act.

1. People Will Be Getting Checks

Call it a crazy hunch, but my guess is that the law will look a lot less tyrannical when people start getting checks in the mail to help pay for their insurance.

Folks making up to four times the federal poverty line will be eligible for subsidies. In 2012, that would mean a family of four making up to $92,200 (it's a bit higher in Alaska) would see some cash.

Those subsidies will come in the form of “advanceable” tax credits, meaning that people won't have to wait until they pay their taxes to get the cash, and they'll be fully refundable, so those who don't pay enough in federal income taxes will get a check in the mail from the IRS.

2. The Richest Americans Are Going to Pay More Taxes

Wealthy investors are outraged, but most people probably don't know that a 3.8% surcharge on investment income – dividends and capital gains -- kicks in this January for everyone with an adjusted gross income of over $200,000 ($250,000 for joint filers). So those currently enjoying the lowest rate on investments in our nation's history will pay for a decent chunk of the bill.

For the past 18 months or so, insurers have been required to spend 85 percent of the premiums they collect on healthcare (80 percent for individual and small-group plans). If they spend less than that, they have to send their customers a rebate to cover the difference.

Forbes' Rick Ungar called it, “the true ‘bomb’ contained in Obamacare and the one item that will have more impact on the future of how medical care is paid for in this country than anything we’ve seen in quite some time.”

4. Much Ado About the Mandate

With the Supreme Court's ruling last week, the mandate is gone, but the penalty for not carrying insurance remains. If there's one thing Democrats, Republicans and independents agree on, it's that they don't like it.

And they shouldn't. But most people probably don't know just how modest the impact of the mandate really is. According to the Congressional Budget Office, just 1 percent of the population will pay the penalty, which maxes out at 1 percent of one's income.

A lot of conservatives are convinced that jack-booted gummint thugs will round them up and stick them in FEMA camps if they don't pay up. But as Timothy Noah points out, “the health reform law explicitly states (on Page 336): 'In the case of any failure by a taxpayer to timely pay any penalty imposed by this section, such taxpayer shall not be subject to any criminal prosecution or penalty with respect to such failure.'" They can only dock future tax refunds.

5. And Nobody Ever Talks About the Employer Mandate

Starting in 2014, companies with 50 or more full-time workers (two part-timers count as one full-timer for this purpose) will have to pay penalties if they don't cover their employees' health insurance. (This provision is a bit complicated -- all the details are here.)

Mitt Romnney says that “Obamacare adds trillions to our deficits and to our national debt, and pushes those obligations onto coming generations.”

That message appears to be sinking in. According to Kaiser, a majority of Americans – and a third of Democrats – think the healthcare law will increase the deficit. But according to the Congressional Budget Office, the law will reduce the projected deficit by $210 billion over the next decade.

7. Chicks Will Dig This

Many people are aware of the regulation requiring insurers to cover people with pre-existing conditions. It's one of the most popular parts of the whole. But fewer know that, beginning in 2014, insurers won't be able to charge women higher premiums than men.

Also coming in 2014: a ban on insurers placing annual limits on healthcare (lifetime coverage limits were already banned in 2010).

The Kaiser poll found that few people were aware of another popular new insurance regulation: since 2010, insurance companies can no longer charge co-pays or hold you to a deductible for preventive health services.

Kaiser didn't ask for people's opinions on this one, but it may be one of those under-the-radar provisions that actually ends up helping a lot of people.

Community health centers (CHCs) now serve the primary care needs of about 20 million Americans, and they have a proven track record. But the system is strained and underfunded.

The expansion of Medicaid will help alleviate some of the pressure, and the healthcare law also allocates $11 billion over a five-year period to build new CHCs and upgrade existing infrastructure. Most of the dollars will end up in poorer communities.

A lot of underserved people live in rural America, and the law also provides money to train and place 16,000 primary caregivers in rural communities over a five-year period.

Starting in 2014, in order for insurers to sell coverage through state-based exchanges – a place where a lot of the newly insured will likely end up – they will be required to cover a package of “essential benefits,” including maternity care, mental healthcare and substance abuse treatment, pediatric care, ambulance rides and hospitalization.

They don't have to if they don't want to participate in the exchanges, yet this measure is, according to many, at the heart of the supposed “government takeover” of our healthcare system.

There is no doubt that we'll hear lots of Republicans blustering about how they'll repeal Obamacare on day one if they win the White House and the Senate, but it's a lot less clear that they'd actually follow through.

As Igor Volsky notes, unless the Republicans were to win both the White House and a huge number of senate seats, they “can do little more than weaken Obamacare’s regulations and defund some of its provisions.” They also have nothing to replace it with, and would own our screwed up healthcare system for a generation. And they'd lose an issue that fires up the conservative base. They will, however, do their best to gum up the works as the law is implemented.

The takeaway to all of this is that the healthcare law is only going to get more popular as it's provisions kick in. People will see some tangible benefits, and the fearmongering will prove unfounded.

Like the idea of government itself, people are suspicious of the Affordable Care Act as an abstraction, but when it gets to the specifics they tend to like it a lot better.

Joshua Holland is an editor and senior writer at AlterNet. He is the author of The 15 Biggest Lies About the Economy: And Everything else the Right Doesn't Want You to Know About Taxes, Jobs and Corporate America.