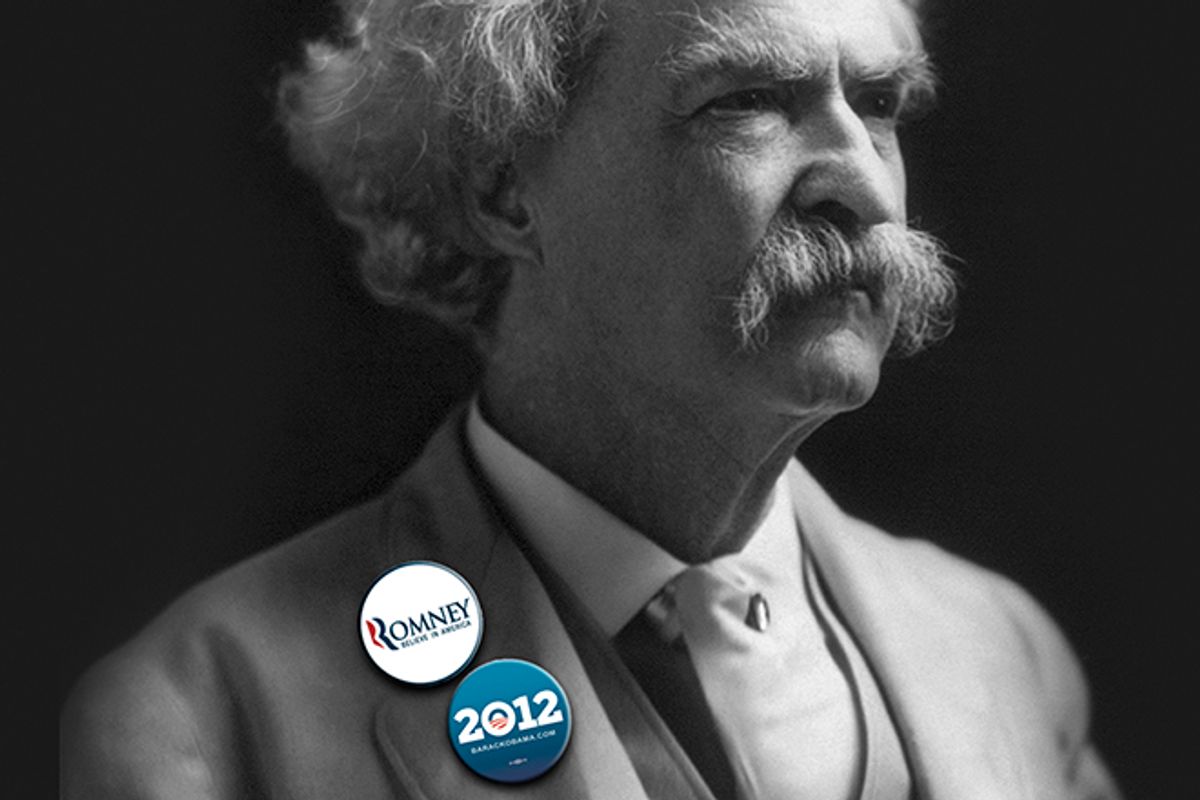 On one side, a childhood bully with more money “than a body could tell what to do with,” the product of religious fundamentalists, and an individualist resentful toward bureaucracy and fearful of government. On the other, the improbable hero of his own story, the son of an absentee father, a born storyteller with a once-troubled youth. To see this rivalry played out, you could go to any number of news sources. Or you could go to one book. Because I’m not talking about Mitt Romney or Barack Obama. I’m talking about a single character, a 13-year-old boy invented almost 130 years ago by Mark Twain.

Published in 1885 during Reconstruction, but set before the Civil War, "The Adventures of Huckleberry Finn" might be the most nuanced and intelligent account of the dual instincts of the American mind our literature has to offer. In the voice of one unforgettable narrator — a confused but insightful, unlawful but moral adolescent — Twain’s novel shows us more about our complex and contradictory ideals about government, race, economics and politics than just about any blog or radio show you’re likely to encounter.

Concerned with the size and role of government? Start with this intoxicated, anti-federalist rant from Huck’s “pap.”

“Call this a govment!” he exclaims. “The law backs that old Judge Thatcher up and helps him to keep me out o’ my property … A man can’t get his rights in a govment like this.”

It’s a sentiment we’ve heard before from the Tea Party in arguments about tax reform, economic inequality and corporate bailouts. Consider Glenn Beck, for example, in 2009: “There is a coup going on. There is a stealing of America, and the way it is done, it has been done through … the guise of an election.”

Then, like some irate radio call-in guest, pap’s rant turns quickly racist: “There was a free nigger [in town] from Ohio; a mulater, most as white as a white man,” who, according to pap, has deprived him of wealth  —“there ain’t a man in that town that’s got as fine clothes as what he had” — education and employment  — “they said he was a p’fessor in a college” — and an electoral voice — “when they told me there was a State in this country where they’d let that nigger vote, I drawed out.”

We’ve heard this before, too — the fear of a culture and government that elevate a black man above his “station.” Remember Rush Limbaugh’s claim: “If Obama weren’t black he’d be a tour guide in Honolulu”? Or Arizona Secretary of State Ken Bennett’s recent demand that Hawaii disclose Obama’s birth certificate before he strikes his name from the fall ballot?

The difference, though, is that Twain sends pap spilling over a tub of salt pork immediately after his speech, making sure pap ultimately figures as a comic character in the novel. Pap might take himself seriously, but no careful reader can endorse his politics after seeing him take his anger out on a dinner drum.

Even so, Twain is unwilling to let the matter be resolved swiftly. Elsewhere, the novel criticizes government authority and excess in earnest, even in the plot itself. The novel is, after all, the story of an escaped slave and a poor orphan coming to terms with their humanity in the absence of civil constraint. Their friendship is enabled precisely by Huck’s disregard for the law. In as much as we’re rooting for Huck and Jim to get away, we’re also rooting for the arm of the law not to intervene.

In another passage, Jim himself raises concerns over government’s reach. To pass the time, Huck is telling Jim stories about “kings, and dukes, and earls, and such.” But when Huck gets to the story of King Solomon, Jim stops him short to explain how he missed the point. The moral, according to Jim, isn’t about a good mother and a bad one. It’s about the limits of power. In short, it’s a libertarian parable. A man in possession of only a couple of children, he explains, “know how to value ‘em,” but a king overseeing “five million chillen runnin’ roun’ de house, en it’s diffunt. He as soon chop a chile in two as a cat.” The implication being that matters of private life shouldn’t be left to large government bodies.

Huck later comes around to Jim’s point of view. “Sometimes,” he says, “I wish we could hear of a country that’s out of kings.”

But for all Huck’s speechifying, he actually trusts and respects authority. In order to hide money from his thieving father, Huck entrusts all his riches to Judge Thatcher, who then establishes a kind of CD that pays a respectable dollar a day in dividends. Because Huck neither trusts his father nor himself with the money, the novel’s chief figure of authority — indeed the book’s only government official — must intervene where the individual has failed. He protects those who can’t protect themselves. He assumes financial responsibility for the poor. And we come to regard Judge Thatcher and his office as a necessary indemnity against financial ruin. He figures as both a regulatory committee and a kind of safety net -- perhaps the role Chief Justice John Roberts claimed for himself as the deciding vote in the Supreme Court's healthcare decision.

What about the economy? Well, there’s plenty of that, too. In addition to pap’s fears about government largess, his screed about the freed slave from Ohio suggests an innate fear of social and economic displacement. Like some anti-immigration hard-liners, he feels disenfranchised by the emancipation of others and believes another man’s financial opportunities (a non-white’s, that is) are detrimental to his livelihood (never mind the fact that the man in question holds a position pap could never achieve). His nativist tirade could be pulled straight from the pages of NumbersUSA, or a Lou Dobbs broadcast. Remember Dobbs saying, “The invasion of illegal aliens is threatening the health of many Americans”? It’s hard not to picture pap first in line to hear that quip.

It’s not only Huck’s alcoholic father who feels cheated by the social contract, though. This anxiety pervades the novel — to the point that even in rural settings far removed from civilized society, the characters manage to find somebody to feel cheated by. Early in his adventure, Huck wanders alone into the woods. “I slunk along another piece further, then listened again,” he says. “[I]f I see a stump, I took it for a man; if I trod on a stick and broke it, it made me feel like a person had cut one of my breaths in two and I only got half, and the short half, too.” Throughout the novel, the characters we love, and even the ones we don’t, all seem to be left holding the short end. (“I should tell my story,” Mitt Romney might sympathize. “I’m also unemployed.”)

But as we’ve seen before, the novel isn’t willing to promote only one position. Despite its anxiety about economic inequality, it also champions prosperity. Throughout, Tom Sawyer, a well-to-do kid with nothing but time on his hands — basically a young George W. Bush — is held up, at least by Huck and Jim, as the paragon of glamour and intelligence. What would Tom Sawyer do? plays like a mantra through Huck’s narrative. He even disguises himself as Tom late in the novel.

In another incident, Huck tricks his way into the comfortable home of a tacky but well-off family named Grangerford. “On a table in the middle of the room,” he observes, “was a kind of lovely crockery basket that had apples and oranges and peaches and grapes piled up in it which was much redder and yellower and prettier than real ones is.”

The reader knows to laugh at this description, but not Huck; to him the fake fruit basket is the epitome of taste and sophistication, an emblem of the kind of life he wishes for himself, but which is unavailable to him except through deception. But moving among the wealthy requires an uncomfortable duality. On the one hand, he wouldn’t mind a few of those apples and oranges for himself. (Somewhere in the back of his mind he’s channeling Vice President Joseph Biden: “The middle class is getting screwed.”) On the other, affluence isn’t worth going “back to the widow and [being] respectable.” He’s trapped between an instinct toward individualism and the acknowledgment that law and society can offer support he can’t get on his own.

If this doesn’t sound like the book you remember from middle school, don’t fret. It’s still an adventure story, a romance and a farce. There are murders, double-crossings, pratfalls and charades. But antics and entertainment aside, "Huck Finn" is also a portrait of moral ambivalence, financial (im)mobility and shifting cultural paradigms. Its equivocations serve to illuminate the duality of the American political mind — a duality that doesn’t appear to have changed all that much in the last century and a half.