If "The Office" was tasked with promoting the Olympics instead of making paper, it might look like "Twenty Twelve" 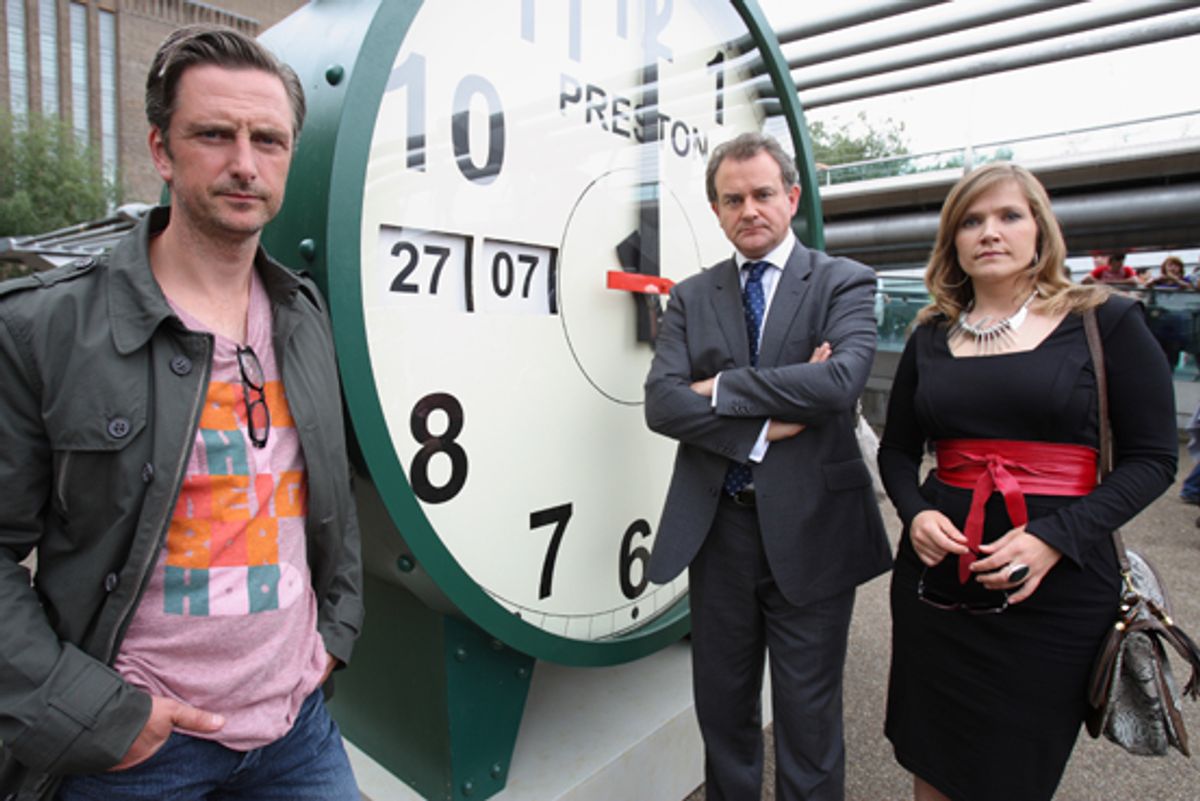 Having played the stuffy, occasionally amusing paternal head of Downton Abbey, Lord Grantham, Hugh Bonneville is perfectly suited to play the stuffy Head of Deliverance for the Olympic Deliverance Commission, the agency charged to help plan the huge games in London this summer.

But in the sharp BBC comedy series “Twenty Twelve,” just now getting to the States, the shambling occurs all around him: a public relations “branding” expert who can’t stop jabbering nonsense, a facilities chief who can’t keep his mind on one topic, a secretary who serves him too well, a wife who despises him.

All the while, he’s trying to keep up the old stiff upper lip as he tries to get through each useless week when he knows they’ve gotten no closer to addressing the kind of systematic problems the 2012 Olympics will likely cause in London’s East End when the games open in less than a month.

From John Morton, creator of “People Like Us,” “Twenty Twelve” is the funniest British satire since “The Office,” and it's done in very much the same faux-documentary style (with the interviewer’s questions now being occasionally heard, or his camera at one point being knocked out of his hands). When it first aired in England last year, they could all still laugh at it, when the games still seemed so far away.

By now, I’m sure the last-minute preparations are no laughing matter, and it’s obvious few countries would be as open to such parody during similarly stressful times. (No such series was reported to have been made before China 2008, for example.)

And yet the material is ample as it is timely. Just a couple of months ago, I saw the billboards at Heathrow declaring “We’re Ready” as escalators full of passengers were spilled out onto plazas that were already mobbed.

For “Twenty Twelve,” the humiliations are smaller. The fold-up minibike he takes to work seems ridiculous. The giant pile of horse manure piled outside the office to protest the proposed equestrian stadium in Greenwich Park seems an excessive metaphor for the problems before them.

And never was there a team so ill-prepared for the task before them. Bonneville’s Ian Fletcher tries to shoulder through on duty and honor, but the yammering P.R. person, played to perfection by Jessica Hynes, is the very model of the sort of double-speak -- or nonspeak -- of those in the branding fields. She can’t quite talk to the snarling artist enlisted to make a countdown clock nobody can quite figure out; she has to hear the single note “audio brand” nearly a dozen times before it sinks in.

Amelia Bullmore, playing a woman trying to nail down sustainability issues surrounding the games, can’t even get her colleagues to get its name right (they keep calling it “legacy”). Further, after encountering problems while trying to do a video blog on the ramped up Olympic planning site, she uses it to send thinly veiled messages to her ex-husband.

The Ed Norton-like Head of Infrastructure, played by Karl Theobald, is practically a comedy in and of himself. He sits at his computers and eats junk food and imagines wrongheaded solutions to the very real problems of a city that will try to absorb and transport 1 million visitors -- when he isn’t being sidetracked by his own asides.

That he can’t get a single busload of visiting Brazilian dignitaries out to the Olympic site only starts to hint at the ineptitude. I swear by now that his character, Graham Hitchins, probably was behind the escalator snafu at the airport and that Hynes’s Siobhan Sharpe produced the billboard’s clueless lie.

The airing of “Twenty Twelve” stateside comes in a tumble, as well. Its first three episodes show back-to-back when it premieres on Thursday, and it will run the last three episodes of the first season in subsequent weeks on Saturday nights around midnight, followed immediately by four additional episodes from a second season that ran earlier this spring. With any luck, those will be followed by the final run of three episodes that will be shown in the U.K. just before the Olympic opening ceremony on July 27.

The idea is that it won’t be timely or funny after the games actually start, but this kind of comedy gold will likely find a long afterlife.