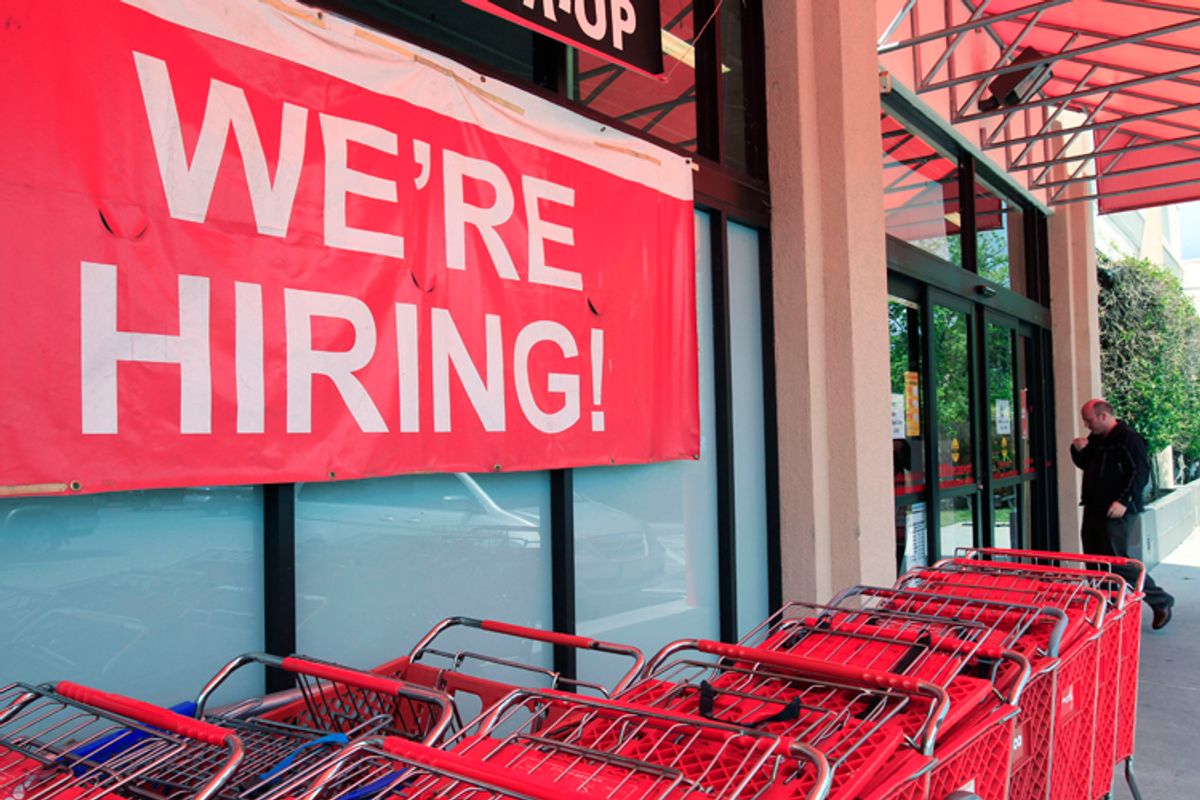 WASHINGTON (AP) — U.S. employers added only 80,000 jobs in June, a third straight month of weak hiring that shows the economy is still struggling three years after the recession ended.

The unemployment rate was unchanged at 8.2 percent, the Labor Department said in its report Friday.

The economy added an average of just 75,000 jobs a month in the April-June quarter. That's one-third of the 226,000 a month created in the first quarter.

"It's a disappointing report," said George Mokrzan, director of economics at Huntington National Bank in Columbus, Ohio. He said the job gains are consistent with sluggish economic growth.

Stock futures fell modestly after the report came out. Dow Jones industrial average futures were down 24 points before the report at 8:30 a.m., and were down 76 points minutes later.

Yields for government bonds sank, an indication that investors were putting money into the Treasury market. The yield on the 10-year U.S. Treasury note was 1.59 percent just before the report and 1.56 percent after it came out.

A weaker job market has made consumers less confident. They have pulled back on spending, even though gas prices have plunged since early spring.

High unemployment could shift momentum to Mitt Romney, the presumptive GOP presidential nominee. An Associated Press-GfK poll released last month found that more than half of those surveyed disapproved of President Barack Obama's handling of the economy.

Obama is expected to face voters with the highest unemployment rate of any president since the Great Depression, and the economy is the top issue for many voters.

The June job figures could also prompt the Federal Reserve to take further action to try to boost the economy. The Fed last month downgraded its economic outlook for 2012. It predicted growth of just 1.9 percent to 2.4 percent. And it doesn't expect the unemployment rate to fall much further this year.

John Silvia, chief economist at Wells Fargo, said he didn't think Friday's report would prod the Fed to launch a new effort to boost growth after its next policy meeting at the end of this month.

But Silvia said if the job market doesn't improve over the next couple of months, the Fed might launch a third round of bond buying at its September meeting. Bond buying by the Fed is intended to lower long-term interest rates to encourage borrowing and spending.

"Most firms can achieve their output target with their existing labor force, so they are just not hiring," Silvia said.

Silvia said the June job growth is consistent with annual economic growth below 2 percent. Wells Fargo is forecasting growth in the April-June quarter at 1.5 percent, weaker than the 1.9 percent growth in the first quarter.

Such growth is too weak to lower the unemployment rate.

Revisions to the job gains in April and May were little changed from the government's previous estimates.

There were some good signs in the report. The average work week grew to 34.5 hours from 34.4 in May, boosting many workers' paychecks. And average hourly pay rose 6 cents to $23.50. Hourly pay has increased 2 percent in the past year and is ahead of inflation, which has fallen in recent months along with gas prices.

About one-third of the jobs gained in June were in temporary services. Manufacturing added 11,000, its ninth straight month of gains.