To outsiders, there is little more fascinating about the Mormon religion than the secret underwear 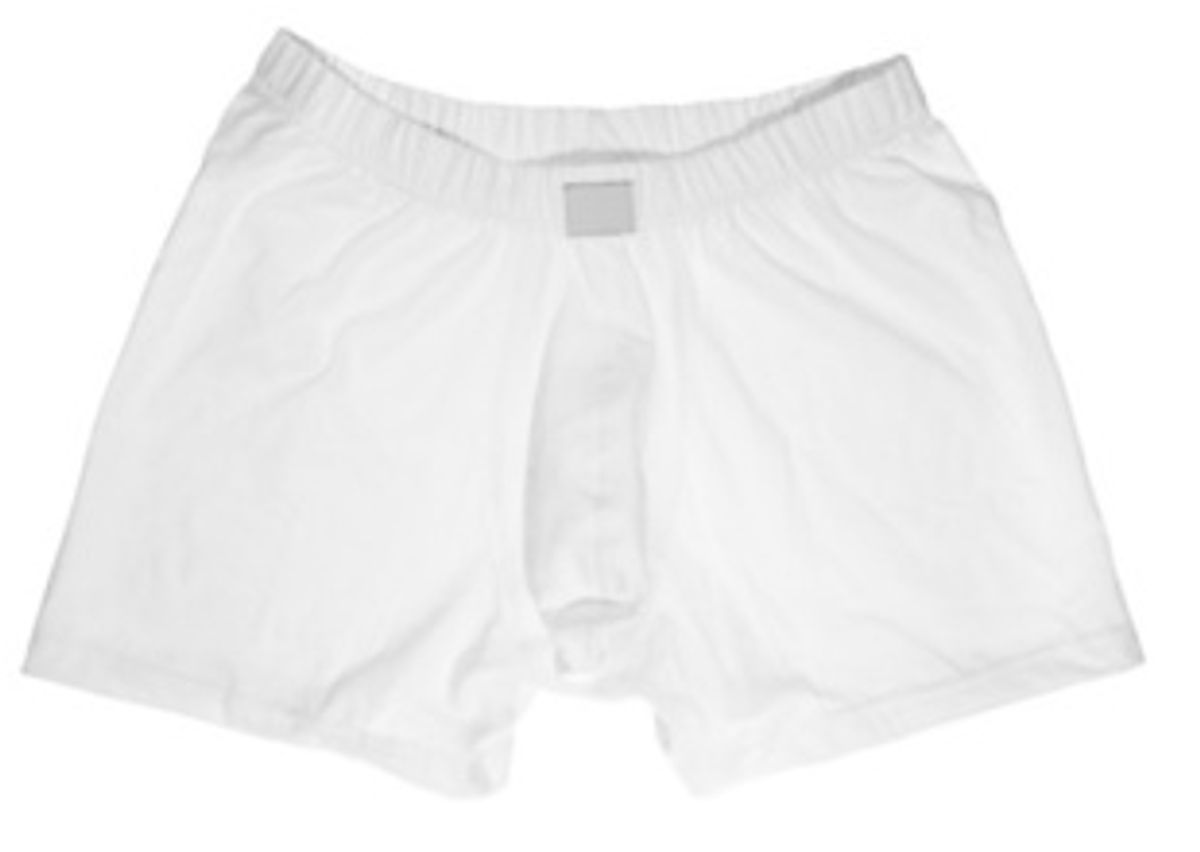 To outsiders, there is little more fascinating about the Mormon religion than the secret underwear that Mormon temple initiates are expected to wear day and night. As one former believer put it, “I've been an exmo since 1967. All that time, the underwear questions were the first ones I got from people who found out I had been Mormon. A friend brought it up again last week at lunch.” Another former Mormon agrees: “When people first find out I'm exmo, their first question/comment almost ALWAYS is, ‘So what is the deal with the magic underwear?!’ Honest! People outside the morg are spending WAY too much time thinking about garmies!”

(“Garmies” is insider slang for the sacred undergarments prescribed by the religion’s founder, Joseph Smith.)

Some outside interest may be driven simply by curiosity: Mormons have sacred underwear! What do they look like? Or incredulity: Religious leaders can tell women to wear undershirts with special symbols all the time beneath their bras and people do it?! But that’s not the whole story.

The idea of sacred, secret underwear seems a little kinky, at least to some outsiders. Commenters on blogs and forums confess the attraction.

I tell you guys who grew up taking 'undergarments' for granted — WE in the not-know find these items fetching indeed [here in Idaho]. (Kymba)

Mine had been in the bottom of my closet in a moving box in a paper bag for 5 years until a couple weekends ago when I modeled them for my boyfriend. He was intrigued by the whole thing and found them to be very sexy. (Randy)

It only makes sense that some subset of us would find the idea of Mormon undies titillating. They are novel, they are secret, they are taboo, and they are in constant contact with genitalia.

But are they kinky to insiders?

It’s hard to get a balanced sample from active Mormons, because the Garments, as I said, are sacred, and catering to the curiosity of prurient outsiders would violate a covenant sworn during the same temple ceremony in which a Mormon gets authorized to wear the Garment. Unfortunately those who have been fantasizing about a romp in which layers of white cotton create the perfect sense of mystery (or bondage), ex-Mormons offer few words of encouragement. Discomfort seems to be the predominant theme.

I was continuously battling wedgies -- often in public; how the people would stare as I would try to wrestle crumpled material out of my crack. (Lady DB)

If you have ever worn the modern ones, you should appreciate the distance these have come. When I first got married they came in a one-piece get-up with a wide neck so you could step into them. The back had a split crotch (not the kind in kinky panties), but this huge, wide, sloppy split would separate under your clothes, leaving a draft in your nether region much of the time. The little panel they sew into the ladies' special part was so poorly designed that it would roll and twist till you felt like you were skewered by a roll of old toilet paper. (Insanad)

Of all of the things about Mo-dom, the thing I miss the least is the underwear. (Zapotec)

Theologically, Mormon undergarments are said to be symbols of a covenant between God and the believer. Initiates pantomime their own death should they violate this sacred trust. The underwear have sacred symbols drawn from the Masonic Order into which Joseph Smith was initiated shortly before he proclaimed God’s desire that people wear the Garment. True-believing Mormons avoid allowing their Garments to touch the ground. They may cut off and burn the symbols when a Garment itself is worn out.

I thought the kitchen was on fire a few times until I found my mom burning the "sacred symbols" in tin cans before she cut the underwear into dust cloths. I was slapped a time or two for letting them fall or drag on the floor when I did laundry as a child. (Cheryl)

In Mormon folk religion, Garments have special powers. Stories are told of wearers being saved from bullets or a fiery death in a car crash. One story tells of a Mormon soldier during WWII who was killed by a Japanese flame thrower – but his Garment survived intact. The stories go back to Joseph Smith himself, who died in a hail of bullets without his Garment on. His companion, Willard Richards, who was wearing his, emerged unscathed. Mormon historian Hubert Bancroft described the incident in his 1890 "History of Utah": “This garment protects from disease, and even death, for the bullet of an enemy will not penetrate it. The Prophet Joseph carelessly left off this garment on the day of his death, and had he not done so, he would have escaped unharmed.”

Today such accounts are not investigated or endorsed by the church authorities. The Catholic hierarchy has an established procedure for assessing claims about weeping statues or a miracle cure, but the Mormon hierarchy largely ignores stories about the real-world protective powers of the white underwear. In 1988, Mormon authorities asserted that the Garment serves as a protection “against temptation and evil.” Unfortunately, ordinary believers may take the broader protective power of their Garments seriously, sometimes with painful consequences.

Flame swept up my arm and no clothing burned at all except the entire sleeve and part of the shoulder of the Garment that burned/melted. I was burned where the material melted into globules. I was a good person. They did not work as claimed. I will never ever forget that day. (AmIDarkNow)

My TBM (True-believing Mormon) father was a radiologist and believed that his garmies would protect him from radiation. Needless to say, the bonehead died of leukemia at 49. (Jeebus)

Taking off the Garments is a big step for many people leaving the Mormon religion. Some people feel vulnerable when they first abandon the regulation underclothes.

Well, I still remember the first time I took them off. Half wondered if I was going to die in a car wreck. (nonyabiz)

I was on the lookout for the death from no garmies, too, for a bit!! Oh good Lord! (makesmyheadspin)

But others experience a sense of freedom:

My hubby and I were cooking on the grill in the back yard. All of a sudden, the wind changed, and a flame leaped out of the grill and came straight at my chest. I looked down and saw it hit my shirt and chest, then arch away from me, back in the direction it came from. I looked down, my plastic buttons weren't melted and the shirt wasn't singed at all. I automatically thought, in my old morg ways, "my Garments must have protected me!" THEN ... I pulled my shirt collar forward and looked down my shirt ... I couldn't stop laughing!! I had no Garments on!! This was soooo refreshing and invigorating! I had been "protected" and I had no Garments on!! (Kathy S)

Sometimes the heart of that newfound freedom is the freedom to explore sexuality or intimacy.

When we began to just lay together, skin to skin, and talk to each other; to feel each other’s pulse and breath; to simply feel our physical selves, our body-shame began to dissipate. (Waking Up)

I remember when I first quit wearing my garments and how feminine I felt. WOW, I actually had breasts and a waist. It was very liberating, and for the first time in my life I began to feel sexual, not a droid without any sexuality. And even though I didn't fit ... what I perceived as the ideal weight, shape, looks, I felt sexy and powerful. (Anonymous)

This is not to say that Mormon Garments have no place in the history or future of erotica. You say tomayto, I say tomaaahhhto. Interestingly, the Garment may owe its existence to Joseph Smith wrestling with his own high libido. As recent research on homosexuality suggests, people who are struggling to contain or suppress their own sexuality may be particularly interested in controlling the sexuality of others. Historians are unclear on the number of women Smith actually married and the number with which he simply had sexual relationships. The list of his wives, first published in the late 19th century and still debated, includes 27 names. Despite this, Smith preached against polygamy till his death. Was the design of the Garment (then a full-body, long-sleeved, button-up affair) the product of a divine revelation, Smith’s sexual tastes, or his effort to suppress desire? You decide.

Valerie Tarico is a psychologist and writer in Seattle, Washington, and the founder of Wisdom Commons. She is the author of "Trusting Doubt: A Former Evangelical Looks at Old Beliefs in a New Light" and "Deas and Other Imaginings." Her articles can be found at Awaypoint.Wordpress.com.