"I was not surprised at all" 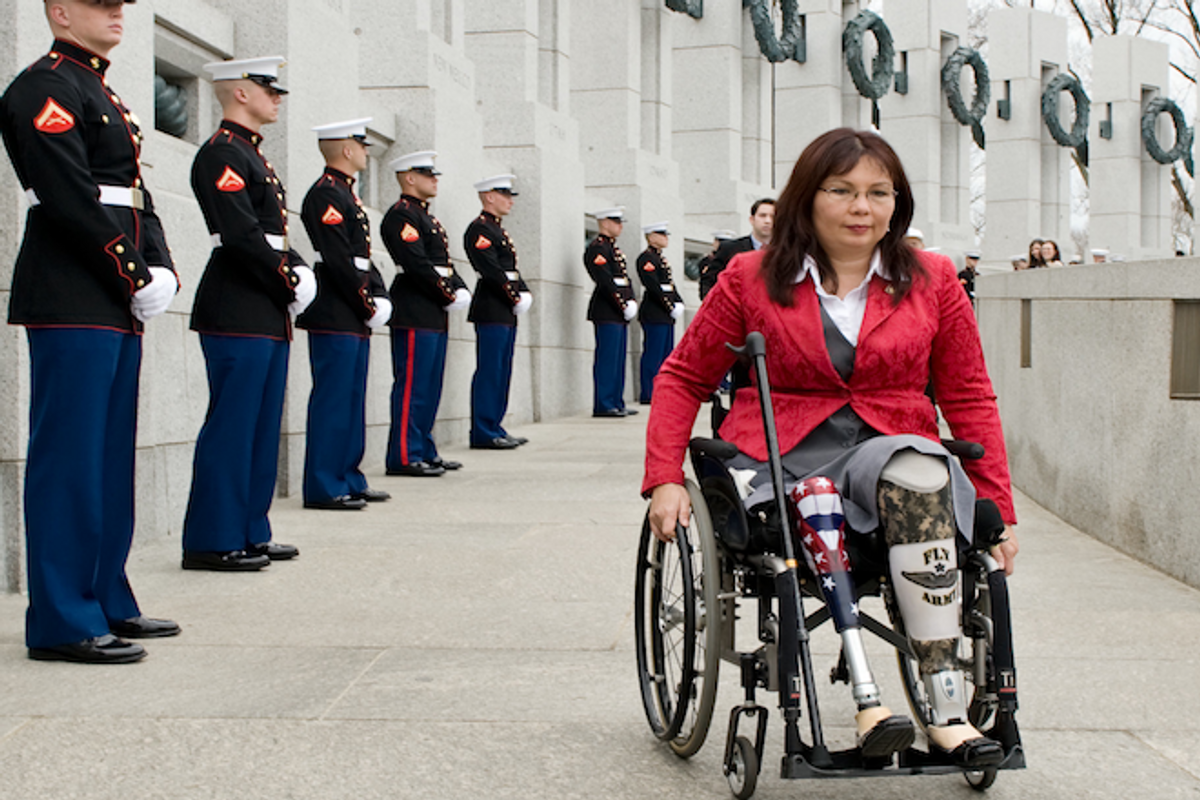 Tammy Duckworth, a Democrat challenging Republican Rep. Joe Walsh in Illinois's 8th Congressional District, is a retired Lieutenant Colonel in the Illinois National Guard who lost both her legs when insurgents shot down her helicopter in Iraq. This week, Walsh, who has never served in the military, attacked Duckworth's military service, sparking a media firestorm. Duckworth spoke with Salon about Walsh, what keeps her going after losing so much and her superstitions.

What was your first reaction when you heard Walsh's comments?

Unfortunately, I was not surprised at all. This is typical of the type of things that he says. We didn’t responds the first two times. And this time, we didn’t respond at first either, but then I just felt like we had to because I think he’s undermining a lot of veterans out there. There are 23 million veterans in this country, and they should not be criticized for talking about their military service.

I know some veterans have flooded Walsh's Facebook account with condemnations. Have you heard from other veterans?

Definitely, a lot of folks have reached out to us. A lot of veterans, including some who say, "I’m a Republican, but I’m supporting you because this is just not acceptable." And you know, we even had a lot folks come and sign up on our Facebook page, as well. So it’s been great.

Who is he appealing to here with these comments? Do you get the sense that voters are fed up with this kind of rhetoric?

I think he’s just very irresponsible in his words and in his actions as a congressman. I don’t know, maybe he really believes this stuff that he’s saying. He’s certainly said this enough times, trying to undermine military service.  … I think voters are definitely fed up with it. You know, they just want people in Washington to work together and solve the problems of this country and of this district. And I think Congressman Walsh, if anything, has been consistent in that he said he was going to Washington to be a poster child for the Tea Party and that the folks in the district were going to get squat from him, his words directly. And he’s lived up to that. So they’re sick and tired of it.

I think he was just trying to distract the people and the constituents form the bad votes that he cast. … He was the only member of the entire bipartisan Illinois delegation to vote against the highway bill that would bring much-needed jobs as well as help repair our roads in this district. He even voted to let student loan rates double. So he had a pretty bad week in terms of the votes that he chose to cast. And instead of trying to explain them to the constituents, he chose to attack someone’s military service on Fourth of July weekend, which is ... It just speaks to his irresponsible nature.

You ran in 2006 and lost by fewer than 5,000 votes. What do you think is different this year, aside from a new congressional district (from the 6th to the 8th)?

Well, with redistricting, over half this district, what is now the new 8th, was part of the old 6th, so most of the people here know me very well, and most of those folks have voted for me [in the past].

What’s different now is me. I have significantly more government experience. In those six years since 2006, I’ve started many many programs that have been successful on behalf of veterans. Whether it was was working with then then-Lieutenant Governor Quinn [as Director of the Illinois Department of Veterans Affairs] to tackle president Obama’s tax credits for Illinois businesses that hire veterans, [or starting] the first-in-the-nation 24-hour mental health crisis hotline for veterans. We [also] started an award-winning home loan program for veterans.

And then at the federal VA, when I was privileged to serve under General Shinseki [the Secretary of Veterans Affairs] there, I was put in charge of the homelessness program, and I was able to cut the number of homeless veterans in half at my time there.

What would a Mitt Romney presidency mean for veterans?

I don’t know. I would hope that he would support our nation's veterans. I think, as you said earlier, it doesn’t matter if you’re a Republican, a Democrat or a Tea Partier like Joe Walsh, you should support our vets, and I hope that Mr. Romney would do that. I am worried, though, that as part of the Republican presidential primary debate, he, in line with almost every other Republican candidate, called for an invasion of Iran. I don’t think that that’s anything that our military men and women should take as a first action. We need to have a national discussion about the true cost of war. And if it's in the best interest of the nation, then fine, but we need to have a national discuss about it first. So I’m a little worried when candidates for presidents so easily pass out talk about invading Iran.

Looking at your biography, it occurred to me that you share some similarities with Barack Obama, growing up in Indonesia and Hawaii to parents of mixed ancestry, though you were born in Thailand to an American father. How has that experience informed you?

My dad worked for the United Nations development program and refugee programs after his service in Vietnam. And then he worked for some large multinational corporations, so I think I have a global perspective on the shining light that America can be in the world. Where I was growing up, America was the example for the rest of the world, and we should continue to be that. I’ve not talked to the president too much about that background. We were separated by eight years in Hawaii and also some time in Indonesia, but I think that there’s a common perspective there in terms of caution in protecting America’s military might only as a last resort and an understanding that we need to be more competitive in Asia.

After graduating from Officer Candidate School, you chose to be a helicopter pilot because it was one of the few combat jobs open to women. An insurgent shot down your helicopter in Iraq and you lost both your legs, as well as the use of your right arm. I can’t imagine how difficult that is. What keeps you going?

If I tell you, will you not beat me up for talking about my military service? [Laughs.] It literally goes back to that day in that field in Iraq. You know, we all have defining moments in our lives. But for me, it is that day. It is that day when my buddies refused to leave me behind. I should be dead. I was triaged for dead. They assumed that I was dead. They came back and carried my body out and gave me a shot. Everyday, whether it was in the hospital learning to walk again, or every day since, has been about trying to live up to that. Because the real heroes were those men who carried me out, my buddies.

And I don’t ever want to have a day, whether it’s at the VA or on the campaign trail or hopefully when I’m in Congress, that there will ever be shame about how hard I’m going to work. I wasn’t going to sit and feel sorry for myself and cry on my couch and not learn to walk again, because these men saved me and risked their lives to save me. So I have that to look to every single day. This is my second chance at life, and I’m going to do everything I can to live up to the sacrifices those guys made for me. I have to be worthy of that.

And finally, every office is unique and says something about its occupant -- how would you decorate your congressional office, if you win?

You know, I’m actually pretty superstitious. I don’t even like it when sometimes people like to introduce you as, "the next congressperson from" -- I don’t even like that. I’m very superstitious. Having gone through a tough loss in 2006, I hope you understand why I won’t even speculate. Until then, I’m keeping my fingers crossed, I’m blowing out candles, I’m wishing on wishing stars, and I’m going to work my butt off, and then maybe you can give me a call if I win and we can talk about it.