Puking in my wedding dress

I was nuts about Marc, but after cognac shots at our reception and weeks of fighting with his mom, I was just nuts 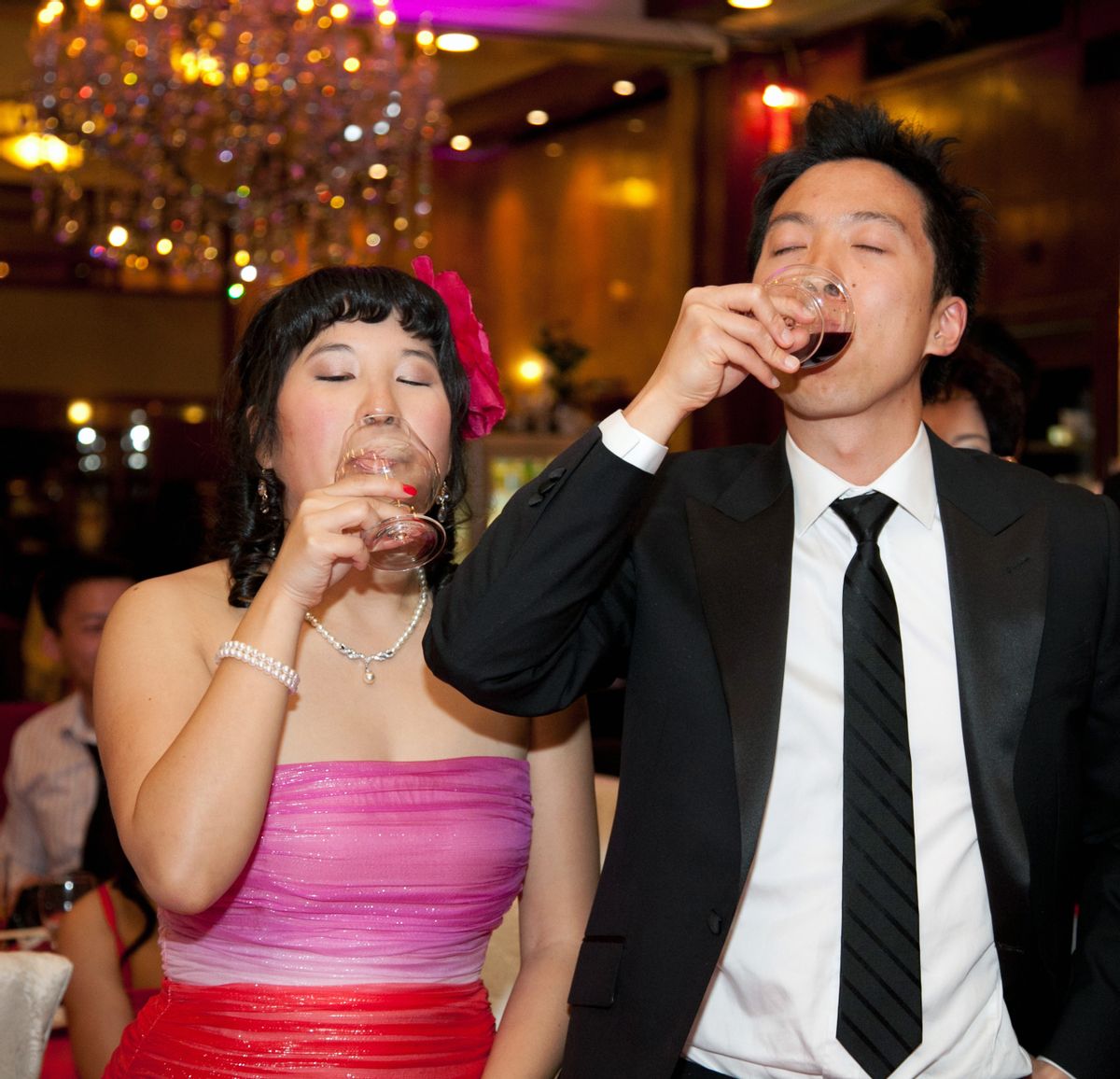 A photo of the author and her husband taking one of many cognac shots on her wedding night.
--

I don’t remember much about our wedding night in Holland, except that my knees were pressed against the cold tiles of the hotel bathroom while my face was in the toilet. Somehow, I was no longer wearing my wedding dress. My husband, Marc, must have stripped me out of it to protect the delicate fabric from my own vomit. I felt very dizzy and very naked.

“Just try to get all of it out,” my husband said, holding up my hair. “Stick your finger on your tongue.”

“All of it” was the two bottles of Cognac XO we drank with our wedding guests that night. It is a Chinese tradition that the newlyweds must go around the room and toast each and every guest, knocking back very old and very expensive shots of hard liquor.

For the first few tables, Marc and I secretly poured ourselves some Chinese tea. We downed glass after glass of Oolong with ease, until a cousin grabbed the goblets from our hands and held them under his nose, sniffing them dramatically.

“It’s TEA!” he roared. I watched in horror as he poured out our imitation cognac into an empty rice bowl. Then, he filled our glasses with the real stuff: a heinous bronze fluid. Five, six or maybe seven shots later — I lost count — and the room was spinning.

In truth, Marc and I weren’t so newly wed. We were legally married in a civil ceremony last year. But with his parents living in the Netherlands and my parents in Canada, our families decided to host two separate receptions. The first reception was held this spring in Rotterdam, Marc’s hometown, and from the beginning I knew it would be trouble.

“What will you wear?” Marc’s mother asked me over Skype one day.

“I was planning to wear the dress I wore for the civil ceremony,” I said. It was an adorable, custom-made number — a white, A-line strapless dress with a cerise organza ribbon at the waist.

She had always been a little too straightforward for my liking. But this time, her words stung more than usual. I felt my cheeks grow hot and I looked at my image on the computer screen. A slow Internet connection fragmented my flushed face like a shattered mirror.

“Ma,” Marc jumped in, “don’t be like that.” As their voices heated up, I slowly edged to my left, shuffling my feet until my splintered image disappeared from the screen. Then I dropped to the floor and started crawling on my hands and knees. I didn’t stop until I was well outside of the room. Thanks to Skype, I was able to literally drop out of sight when things got awkward. Unfortunately, that didn’t work as the wedding planning continued, and tensions continued to rise between my mother-in-law and me.

I rejected many of the outdated and rather kitschy Chinese wedding conventions she had in mind. I said “no” to the balloon decorations and “absolutely not” to karaoke during the reception. I said “no, thank you” to the bridesmaids she chose for me, “no” to multiple dress changes throughout the night, “no” to pinning a plastic flower on my dress with a ribbon labeling me as “The Bride” (as if the white dress were not a clear enough sign) and “hell, no” to shark fin soup.

“Don’t you understand? The guests will think I’m cheap if I don’t serve it,” my mother-in-law said, shrugging off my objections that shark finning was cruel and inhumane and throwing the world’s oceans out of whack. From her perspective, I must have seemed like the most ungrateful bride ever.

I’m sensible enough to know that a wedding isn’t just about what the bride wants. But the Holland reception was shaping up to be everything I didn’t want. I imagined standing in a room filled with balloons and large karaoke speakers squealing from the unimaginably high tones of someone belting out Chinese opera. I tried to envision greeting nearly 150 guests — many of whom I did not know — and then watching them happily slurp down glutinous bowls of shark fin soup. It was too much.

“Why does your family hate me?” I screamed at Marc. “Don’t they realize what a good daughter-in-law they have?” The truth was, his mother and father were fond of me. But the wedding wasn’t about me. It was about pleasing their guests.

“This is just one day in your entire life,” one friend said. “Don’t let it ruin your relationship with your in-laws.”

“Or your husband, for that matter!” another friend warned.

It was good advice, but I was stubborn and indignant, unable to let my fury go. Marc and I fought every week leading up to the wedding in Rotterdam. I blamed him for not standing up to his family. I blamed him for not properly explaining the cruelties of shark finning to his mother. I ridiculed the plastic flowers and the balloons.

“What is this? A child’s birthday party?” I screamed, half laughing and half crying. Marc managed to veto the balloons, the plastic flowers and the karaoke. But the shark fin and many other sore points remained. He felt helpless to change his own mother and to change how I felt about his mother. So when I found myself hunched over the toilet in that Rotterdam hotel, retching and in serious pain, I probably could have blamed Marc for that, too.

But what made me sick — even more sick than all that cognac — was to think that our own wedding reception had caused so much strife between us. Marc and I shared a beautiful story that began more than five years ago in Beijing, where we fell so deeply in love that even a subsequent two-year long-distance romance couldn’t keep us apart. The distance only made our bond stronger. Eventually, both of us would give up good jobs in great cities just to be together. How could it be that our wedding could threaten to shake the foundation of our marriage? That night I purged myself of all the anger and resentment that had piled up inside of me and sent it spiraling down that white, porcelain toilet bowl.

Marc had downed too much cognac himself and was struggling to stand. But his hand stayed on my back and his fingers continued to hold up my hair, until finally, more than three hours later, I was too weak to continue. Then he dragged my limp body across the hotel room to the bed before collapsing beside me. I woke up the next morning, my head pounding and the room still spinning. I turned over and saw Marc stumbling around the room, packing up our things so we’d be ready for checkout. It wasn’t the kind of wedding I’d expected. But in Marc, I saw everything I ever wanted in a husband.

Suzanne Ma is currently writing a narrative non-fiction book about Chinese immigrants in Europe, a project funded with the help of a Pulitzer Traveling Fellowship. Her stories have been published by The Wall Street Journal, Bloomberg Businessweek and the Associated Press, among others. She lives and writes in Vancouver, Canada.