A gift from Buchenwald

My parents survived the concentration camps. In the US, they carried with them a reminder of their grief 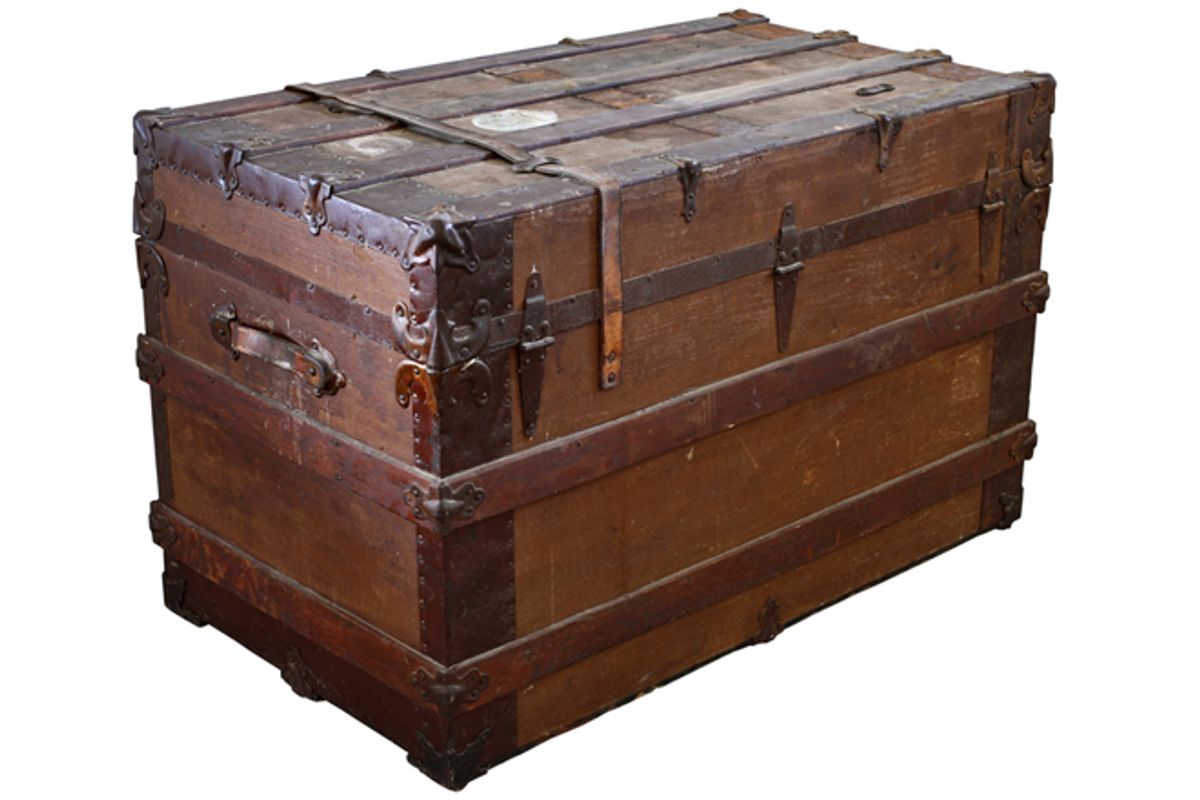 When my parents, my sister and I finally left the refugee camp in Germany after the war, we were allowed to bring very little -- only what would fit into a steamer trunk. The problem was that we couldn't afford to buy one. Not many of the families living in the camps could, so my father did what other people did. He and a friend got together and built his own.

Someplace, somehow, they found a hammer, a saw, nails and some metal stripping, and they set to work. Getting the wood wasn’t a problem. They got it from the walls of the barracks they were living in. It was one of the old German concentration camps barracks that had been converted to living space for the refugees, the Displaced Persons, and this place didn’t have finished plaster or anything like that. If you wanted a board, you could just pull it off of the wall, and that’s what my father did.

I don’t think he felt guilty about busting up those walls. He had spent enough time staring at them that he probably felt he could do anything he wanted to them, and it would be okay. I think if a man spends enough time staring at a thing, it finally becomes his by a kind of default. I don’t know if that’s what my father thought. He didn’t say a lot about building that wooden trunk, and he probably didn’t give it much thought.

The trunk my father and his friend built out of those old boards wasn't big. It was maybe four feet wide, three feet tall and three feet deep. The walls of the trunk were about 3/4 of an inch thick. But wood is always heavy, so even though it wasn’t that big, that trunk generally needed two people to lift it. My father, of course, could lift it by himself. He was a small man, little more than five feet tall, but he had survived four years in Buchenwald as a slave laborer. That work taught him to do just about any work a man could ask him to do. My father could dig for beets in frozen mud and drag fallen trees without bread or hope.

My parents couldn't get much into the trunk, but they put into it what they thought they would need in America and what they didn't want to leave behind: letters from Poland, four pillows made of goose feathers, a black skillet, some photographs of their time in Germany, a wooden cross and clothing -- wool sweaters that my mother knitted for us in case it was cold in America. Somewhere, I’ve got a picture of me wearing one of those sweaters. It looks pretty good. My mother made it before her eyes went bad, and she managed to knit little reindeer and stars across the chest.

When we finally got to America, my parents didn't trash that wooden trunk or break it up, even though there were times when breaking it up and using the wood for a fire would have been a good idea. Instead, they kept it handy for every move they made in the next forty years. They carried it with them when we had to go to the migrant farmers' camp in upstate New York where we worked off the cost of our passage to America. And my parents carried it to Chicago, too, when they heard from their friend, Wenglaz, that the city was a good place for DPs, for refugees. They carried that trunk to all those midwestern rooming houses and apartment buildings and homes. I remember, in those early days in Chicago, that there were times when the only things we owned were the things my mother and father brought with us in that trunk and the only furniture we had was the trunk itself. Sometimes it was a table, and sometimes it was a bench, and sometimes it was even a bed for my sister and me.

When we were kids growing up, Donna and I played with the trunk. It had large, blocky letters printed on it -- the names of the town we came from in Germany, the port we sailed from, and the port we sailed to in America. We would trace the letters with our fingers before we could even read what they said. We imagined that trunk was the boat that brought us to America, and we imagined that it was an airplane and a house. We even imagined that it was a swimming pool, although this became harder to do as we got older and bigger.

When my parents retired in 1990 and moved from Chicago to Sun City, Arizona, they sold or gave away almost everything that they had owned and accumulated in thirty-eight years of living in America. They got rid of bedroom suites and dining room suites, refrigerators and washing machines, ladders and lawnmowers. My parents were never sentimental, and they didn’t put much stock in their possessions. They figured it would be easier to buy new tables and couches when they got to Sun City. But they kept that trunk and the things they could put in it -- along with a TV set.

After my father died in 1997, my mother stayed on in Arizona, where she kept the trunk in a small, eight-by-eight-foot utility room off the carport. It was bare, unadorned but for those big, blocky, white letters. But at some point during their time there, my parents had tried to pretty it up. They painted the trunk a dark brown, almost maroon, color and papered its inside walls in light beige with little blue flowers.

When my mother finally passed away, I had to make sense of her things. I contacted a real estate agent, and he told me how I could get in touch with a company that would sell off all of her possessions in an estate sale.

I thought about taking the wooden trunk back home with me to Valdosta, Georgia. I thought about all it had meant to my parents and to me, how long it had been with them. How they had carried it with them from the DP camps in Germany to Sun City, Arizona, this desert place so different from anything they had ever known overseas. I knew my sister Donna didn't want the trunk. She had spent a lifetime trying to forget the time in the DP camps and what the years in the slave labor camps during the war had cost my parents.

I contacted UPS about shipping it and how it would have to be prepared. They told me it would cost about $150.

I finally decided to leave it and let it get sold off at the estate sale. The trunk had been painted over, and the person buying it wouldn't know anything about what it was or how it got there. It would just be an anonymous, rough-made trunk, painted a dark brown, almost maroon, color with some goofy wallpaper inside.

I was pretty much used up by my mother's dying. She went into the hospital for a gall bladder operation and had a stroke, which left her paralyzed, confused, and weak. She couldn’t talk or move, and the doctor told me that my mother couldn’t even understand what was being said to her. Her condition grew worse, and I put her in a hospice in Sun City. I sat with her there for three weeks, watched her breathing get more and more still. Sometimes, her eyes would open, and she would look around. I would talk to her about things I remembered, her life and my father’s life, my life and my sister’s life. I don’t know if she understood anything. She couldn’t blink or nod, or make sounds with her mouth. I just talked to her about what I remembered, any stupid thing, the bus rides we took, the TV shows she always watched, the oleanders she and my dad liked to grow and plant in the backyard. I didn't think that there was much else I could do for her.

When she died, I didn't want to do anything except get back home to my wife Linda in Georgia. Maybe the extra burden of figuring out how to carry that trunk back to Georgia was more than I could handle. Or maybe I thought that trunk wasn't the same trunk that my parents had brought from the concentration camp in Germany. It had been painted, changed. Maybe I just wanted that trunk to slip away the way my mother had slipped away, become a part of my memory, always there but not there.