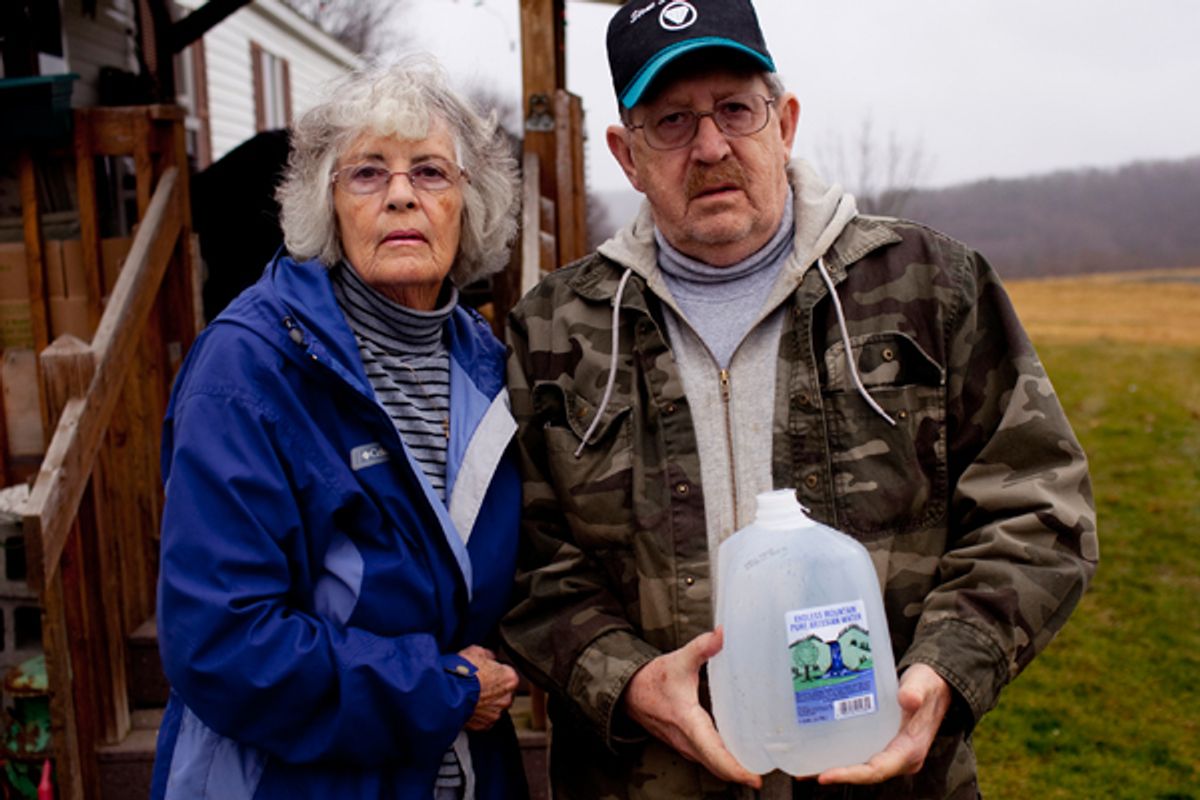 Ron and Jean Carter hold a bottle of well water outside their home in Dimock, Pennsylvania. The Carters are suing Cabot Energy for allegedly poisoning their well with toxic chemicals and water. (Reuters/Les Stone)
--

One of the key arguments in the case for fracking rests on an appeal to common sense. The hydraulic fracturing process -- pushing gallons upon gallons of chemical-laden water into shale rock in order to bubble up natural gas -- takes place deep in the ground, thousands of feet below the earth’s surface and thousands of feet below the shallow aquifers that provide drinking water. Given the distance between the water and the fracking fluid, there’s just no way fracking could contaminate aquifers, the gas industry and its allies argue. So many layers of rock lie between noxious fracking fluid and water that the risks of chemical-laced drinking water don’t compute.

“Any way you look at it,” one natural gas executive told Fox News, “it is hard to imagine that anything we can do at 6,500 feet would ever approach the surface.”

But a new study, published in the formidable Proceedings of the National Academy of Sciences, upends that common-sense argument. It shows that fluids may have traveled from deep within Pennsylvania’s Marcellus Shale, one of the formations at the center of the gas boom, into shallow aquifers hundreds of feet above. These fluids aren’t products of fracking, but if they can travel up through layers of rocks, close to the surface, it means that fracking fluids could, too.

“The fact that it's a mile or two miles apart doesn’t mean that there’s separation,” says Prof. Avner Vengosh, the Duke University geochemist whose research group conducted the study.

The group’s study indicates that, on the contrary, natural pathways link deep formations and shallow aquifers. The team collected and analyzed water samples from aquifers in northeastern Pennsylvania and from brine that originated in the Marcellus Shale in order to build up an inventory of water compositions. “Every water in nature has a unique geochemical fingerprint,” Vengosh says. “As geochemists, we learn to understand the water’s origin.” The chemical fingerprint can change as elements in the water react with rock or as rainwater washes in. One of the types of water they identified had a fingerprint that suggests it had been mixed with water of a much higher salinity -- a water very similar to naturally occurring Marcellus brine.

The study doesn’t prove that fracking fluid has traveled up to aquifers of drinking water. But it’s enough to show that there is no reason to assume that chemicals pumped deep into the ground will stay there. “Because there is a hydraulic connection, it increases the risk of contamination” of ground water, Vengosh says.

Back in May, a study commissioned by anti-fracking groups used computer modeling to show that fracking chemicals could reach shallow aquifers within a few years. That study didn’t use sampling, but it found that the process of fracking itself could speed up the movement of chemicals that would naturally travel through the ground.

This new study doesn’t make any predictions about the time frame in which chemicals might migrate towards the surface or about the volumes of fluid that could make the journey. But it’s notable to Vengosh that the Pennsylvania area in which he and his team were working enjoys fairly heavy rainfall, which means the groundwater aquifer recharges quickly with rainwater. That the team still found a higher concentration of saline water could indicate that there’s a continuous connection between the deeper and more shallow layers of earth. The new study notes, as well, that gas can move much more quickly along these hydraulic pathways than chemical fluids and that it could travel from the shale to the surface within a year.

Just because natural pathways like these could become a problem in some places, though, doesn’t mean that they will pose a problem everywhere. Beneath our feet, the layers of the earth don’t arrange themselves as neatly as an illustration in a middle school textbook, uniformly divided up like layers on a cake, and what’s true in one section of the Marcellus shale will not necessarily be true across its entire breadth, let alone in another formation. These pathways do mean, however, that the natural gas industry can no longer argue that as long as it constructs its wells properly, fracking poses no risk at all to drinking water. In order to claim its work will not contaminate groundwater, gas companies should have to look more closely at the characteristics of the earth that they’re working within. It is not only possible to imagine that work the gas industry does at 6,500 feet could affect water closer to surface, it’s more than reasonable to worry that it will.