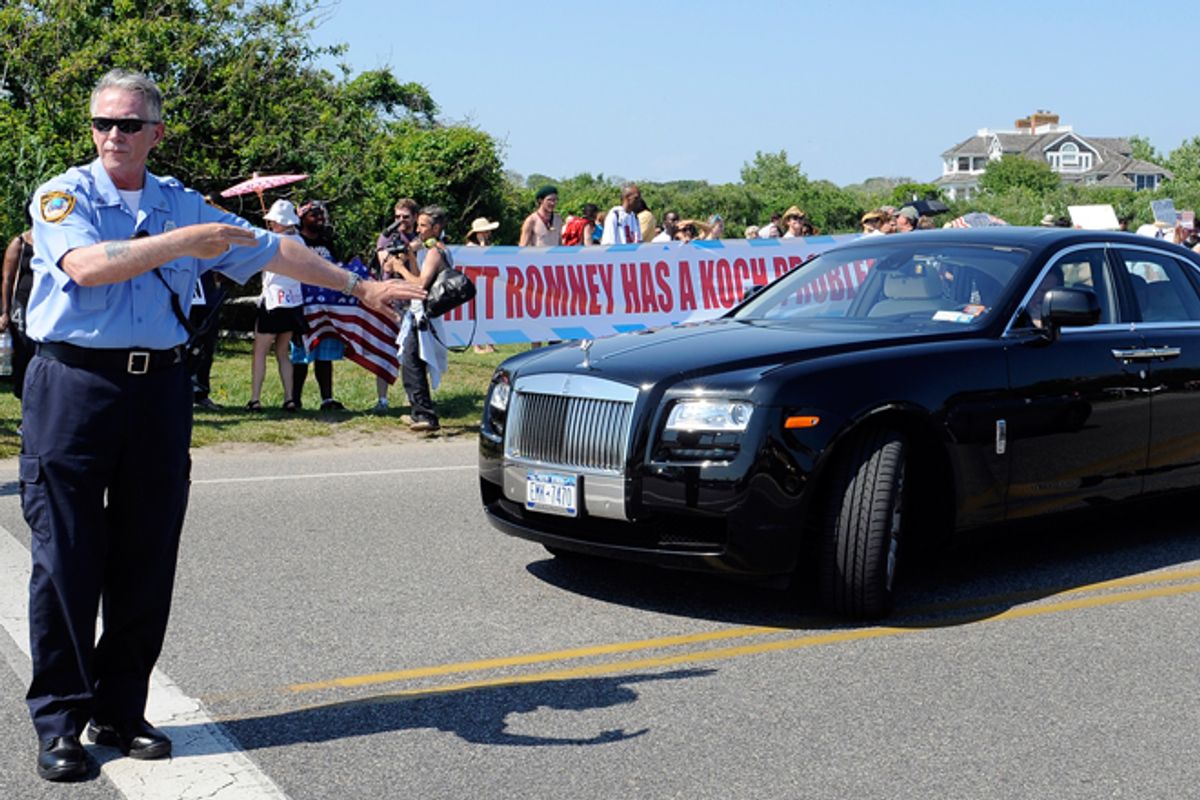 A Southampton police officer directs a Rolls Royce around protestors outside the estate of David Koch before a fundraiser for Mitt Romney on Sunday. (AP/Kathy Kmonicek)
--

Barack Obama couldn't have picked a better day to announce his plan to extend tax cuts for Americans who make less than $250,000 and to let taxes rise for the wealthy. Mitt Romney's three Hamptons fundraisers on Sunday were like a Priorities USA ad, except the creative directors of the pro-Obama super PAC would have rejected the script as over-the-top.

In a clusterfuck of conspicuous consumption, Bentleys, BMWs, Range Rovers, Porsches, a Rolls Royce and a Ferrari idled in a line 30 cars long. "Is there a V.I.P. entrance?" one woman shouted to the "help," according to the New York Times. "We are V.I.P."

It's catchy: As the Occupy Wall Street folks chant "We are the 99 percent," Romney voters can shout back "We-are-V-I-P!" Or maybe they can sing it to the tune of "We Are Family."

Like those shady "social welfare" groups collecting millions from corporations without disclosing their names, most of Romney's donors wanted to remain anonymous. And who can blame them? A woman in a Range Rover with East Hampton beach permits complained to the Los Angeles Times:

If there's ever been a better synopsis of elite Republican philosophy, I can't think of it. Still wondering why the GOP is committed to reducing the voter rolls?

You'd think the Romney team might have had David Koch and Revlon heir Ron Perelman ask their friends to mute the ostentatiousness for a day, but that wouldn't be Mitt Romney. The man who took a tax break for his wife's horse that's larger ($77K) than the average American wage ($46K) doesn't get it. It's why he was stunned when the issue of his hidden tax returns blew up earlier this year, and it's why he is startled now that voters are recoiling at his accounts in the Cayman Islands and Bermuda and at his $100 million "individual retirement account," a vehicle created for middle-class people to put away $2,000 or so a year pre-taxes. (The median IRA account balance for a 65-year-old man like Mitt Romney is $38,204, according to the Employee Benefit Research Institute.)

It's not only Republicans who are clueless about Mitt Romney's vulnerabilities, though. In May, we were treated to the sight of Wall Street Democrats, including former President Clinton, getting a little queasy about the Obama team's attacks on Romney's Bain Capital career. But, in fact, those attacks have been resonating among swing state voters. As Robert Draper reveals in his New York Times magazine piece on pro-Obama super PAC Priorities USA, early attempts to depict Romney as a flip-flopper or extremist didn't work – voters wouldn't even believe Romney supported Paul Ryan's tax-cutting, program-slashing budget. But they did respond to messages showing how his career in private equity made him "someone who understands how the economy works but cares only about making it work for rich guys like himself." That's what this campaign is going to be about.

So today Obama is demanding that Congress extend tax cuts only for Americans making less than $250,000; Republicans want them extended for the wealthiest, too. Early reports focused on alleged disagreement between the president and Democratic leaders like Nancy Pelosi, who is said to prefer extending them for those making up to $1 million. I prefer Obama's approach – but at any rate, it's nice to see the president give himself some room to negotiate rather than handing Republicans virtually all of what they want immediately (as he did when he made the stimulus bill 40 percent tax cuts, rather than adding the cuts in exchange for higher program spending.)

In the meantime, I hope the folks at Priorities USA are getting ready to use Madam Range Rover's entitled rant against "the common person" in an advertising barrage. If "the nail ladies" figure out who she is, Madam Range Rover better be careful during her next pedicure.