We're always told we need a "national service." But feel-good class-mixing gimmicks are no cure for inequality 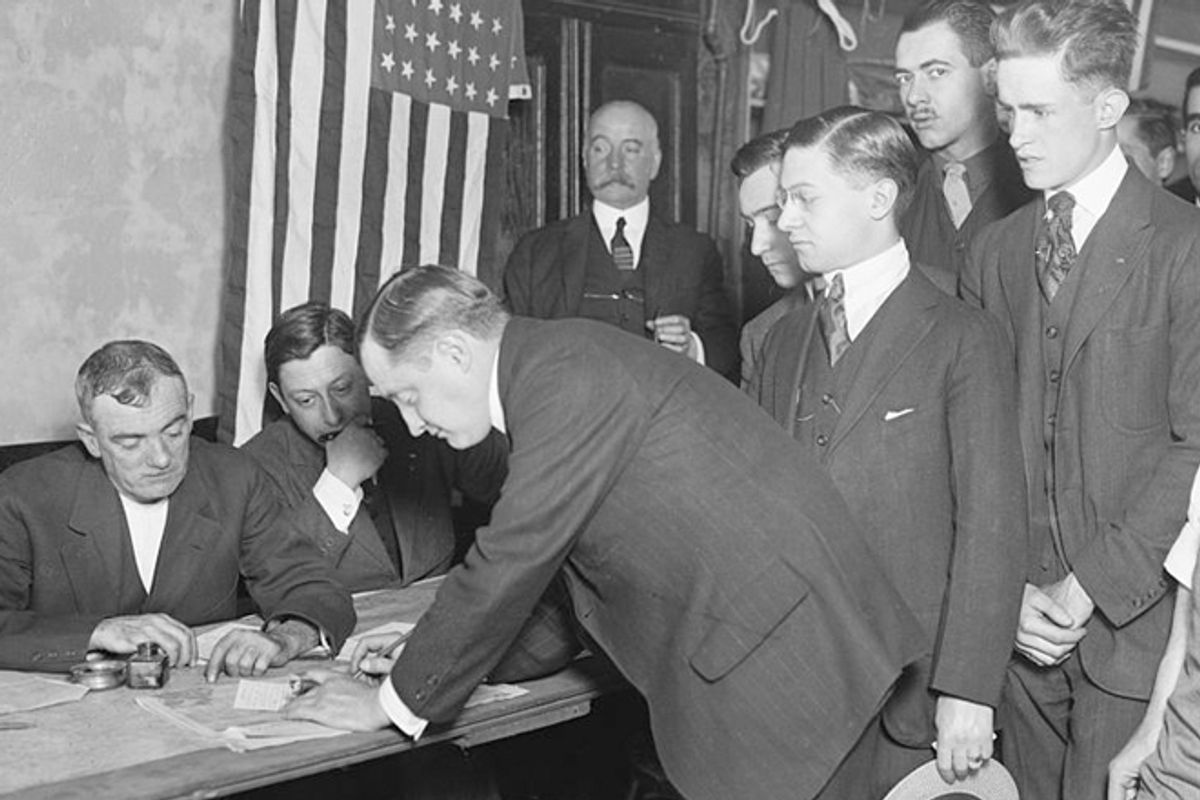 To address America’s extreme inequality, should we reinstate the draft? That suggestion by Gen. Stanley McChrystal recently brought an audience to its feet in a standing ovation at the Aspen Ideas Festival. And Thomas Ricks, a veteran Pentagon correspondent, endorsed the idea in a New York Times Op-Ed on Tuesday.

In the Financial Times, Gillian Tett reflected on the general’s suggestion:

First, it could provide the military with more troops (which it needs), but it could also offer America some of that badly needed bridging capital. “It would be good to have a shared experience,” McChrystal explained, pointing out that if “everyone over the age of 25 was able to go into a bar and talk about where they served”, it would unite Americans again. “I think Israel gets amazing value from that ... in terms of creating a shared experience.” And of course, a bit of service might offer some discipline for today’s youth – along with a sense of (shared) sacrifice in an entitlement age.

National service — the conscription of the nation’s youth for military or civilian service — is at the top of my personal list of Perennial Doomed Ideas. With other items on the list, including a basic minimum cash income for all citizens and a single flat tax, national service shares two characteristics: first, it appeals to civic republican notions of equality, and second, it has been and probably always will be doomed in the world of practical politics.

In the case of military conscription, the appeal of national service is obvious. As a democratic republic, the American public is heir to a long tradition that favors citizen-soldiers who share the sacrifices of war — and dreads the formation of an undemocratic military caste. In addition to these reasons for supporting the idea that all citizens should contribute to military defense, some believe that the U.S. would have gone to war less often in recent decades if the draft had not been abolished in the 1970s. That is the rationale behind the repeated introduction by Rep. Charles Rangel of legislation to bring back the draft.

In spite of its appeal, all attempts to make permanent, universal military training a rite of passage for all American youth have failed, since the early 20th century. Conscription was deeply unpopular during the Civil War and the world wars. The limited form of conscription known as “selective service” during the Cold War was viewed as unfair and abolished as soon as Soviet-American relations thawed in the Nixon years.

Gillian Tett and Thomas Ricks to the contrary, the U.S. in 2012 does not need more troops; it needs fewer wars. The recent “pivot” in American strategy, from labor-intensive nation-building efforts in Muslim countries to “offshore balancing” of China and other potential great power enemies requires a high-tech military dominated by a mix of robots and highly trained professionals, not a mass army of reluctant draftees. Most members of the military are satisfied with our professional soldiers and do not want to baby-sit teenagers who will leave the military after six months or two years of unsought, compulsory training. What about civilian national service? In practice, civilian national service has always piggybacked on a military draft in countries like Germany and France, providing an alternative form of public service for those who object to serving in the military. In countries that have had such dual systems, the abolition of the military draft has wiped out the rationale for the civilian service alternative along with it.

A small but vocal group in the U.S. has always favored civilian national service, even in the absence of a military draft, for two reasons. One is the fear that pampered upper-class youth should be forced, at least for a time in their privileged lives, to endure hardship and maybe even befriend someone from a class other than their own. Anxiety about the decadence of the children of the elite has motivated well-born proponents of national service from Theodore Roosevelt and William James to William F. Buckley Jr. (whom I assisted on his book in favor of national service, "Gratitude").

In his classic 1906 address on national service, published first in 1910, William James, a pacifist, described compulsory national civilian service as “the moral equivalent of war”:

To coal and iron mines, to freight trains, to fishing fleets in December, to dishwashing, clotheswashing, and windowwashing, to road-building and tunnel-making, to foundries and stoke-holes, and to the frames of skyscrapers, would our gilded youths be drafted off, according to their choice, to get the childishness knocked out of them, and to come back into society with healthier sympathies and soberer ideas. They would have paid their blood-tax, done their own part in the immemorial human warfare against nature; they would tread the earth more proudly, the women would value them more highly, they would be better fathers and teachers of the following generation.

A child of the middle class myself, I have no objection to seeing “gilded youths … get the childishness knocked out of them,” and the idea of assigning Biff and his sister Buffy to coal mines or fishing fleets in December has a certain undeniable appeal.

But drafting the non-elite majority of American youth to rub shoulders with the preppies in coal mines and fishing trawlers seems like an extreme and expensive way to toughen up the wimpy trust-fund kids, the equivalent of burning down the barn to roast the pig.

Perhaps the most appealing argument for national civilian service is that it would promote class-mixing, of a kind that we like to imagine existed as a result of the draft during World War II and other major wars. However, it is hard to find any evidence in history that mingling with people of other classes increased cross-class harmony when the guns fell silent. The elite veterans of the Civil War in the late 19th century did not hesitate to support the use of state militias and federal troops to crush other veterans who were railroad workers on strike. White veterans of the Grand Army of the Republic for the most part supported the segregation of the freed slaves, including Union Army Veterans, and their descendants. The members of the “Greatest Generation” who went into corporate boardrooms after World War II declared war on their more numerous blue-collar fellow veterans when they rose to power in the 1970s and 1980s, crushing organized labor and voting themselves and their peers obscene compensation packages in spite of mediocre economic performance.

The argument is moot, in any event, because whenever anybody proposes a program of compulsory civilian service the idea is scotched by the libertarian right and the pro-labor left, which agree on practically nothing except their shared opposition to national service.

The libertarian right makes two compelling arguments against a peacetime draft for civilian purposes. First, it argues that for the government to draft citizens in the absence of overriding military danger is a violation of the 13th Amendment, which bans “involuntary servitude” except for convicted criminals. Whether or not they are right about the Constitution, libertarians are certainly right to suggest that the idea that all citizens owe a year or two of corvée labor to the state for whatever purposes politicians choose is radically alien to the American tradition, traditional though it may have been in pre-modern imperial China. Libertarians also make a persuasive argument that proponents of civilian national service exaggerate the alleged “unmet needs” that could be served by a civilian army of teenage conscripts — ranging from infrastructure projects to childcare and elder care. If these are really unmet needs, why aren’t there entrepreneurs trying to fill them?

Progressives are more likely than libertarians to acknowledge that there are many desirable things in an advanced society that the market fails to provide. But if the public sector is to address these unmet needs, shouldn’t it do so by hiring well-paid adults, with decent benefits, vacation time and the right to organize unions? Labor unions have always been suspicious of the enthusiasm of upper-class progressives like William James for using legions of enslaved adolescents to do what grown-up workers paid living wages could do better. To organized labor, national service looks like a colossal scheme to use teenagers as unpaid or underpaid “scabs.”

But the government could use this cheap labor in new ways, doing jobs that governments do in other countries but which have been deemed too expensive in this one, like providing universal free day care or delivering meals to elderly shut-ins…. The pool of cheap labor available to the federal government would broadly lower its current personnel costs and its pension obligations — especially if the law told federal managers to use the civilian service as much as possible, and wherever plausible. The government could also make this cheap labor available to states and cities. Imagine how many local parks could be cleaned and how much could be saved if a few hundred New York City school custodians were 19, energetic and making $15,000 plus room and board, instead of 50, tired and making $106,329, the top base salary for the city’s public school custodians, before overtime.

Adam Smith, who thought little of most businessmen, observed that any rational employer would prefer slaves to free workers. If Thomas Ricks is correct, so should American government.

Every decade or so, national service catches the fancy of the American elite, and there is a brief flurry of articles and conferences before the idea is rejected once again by the right as collectivist and the labor left as anti-labor. What remains, following each of these flare-ups, is this or that scaled-down, voluntary community service program like the AmeriCorps program, which often connects service to easier access to student loans or grants. These token programs may or may not have good effects, but they do nothing to address the real causes of America’s polarized income structure. A list of things that might actually succeed in reducing inequality in America — higher taxes on unproductive rents and speculation, corporate compensation reform, a higher minimum wage, service-sector unionization, a sound industrial policy, restricting low-wage immigration, regulating healthcare prices and providing public alternatives to price-gouging private universities — would threaten the pocketbooks of America’s oligarchy and would be unlikely to win a standing ovation in Aspen.