After rumors of their release swirled around the Kremlin, three members of the punk rock collective remain in jail 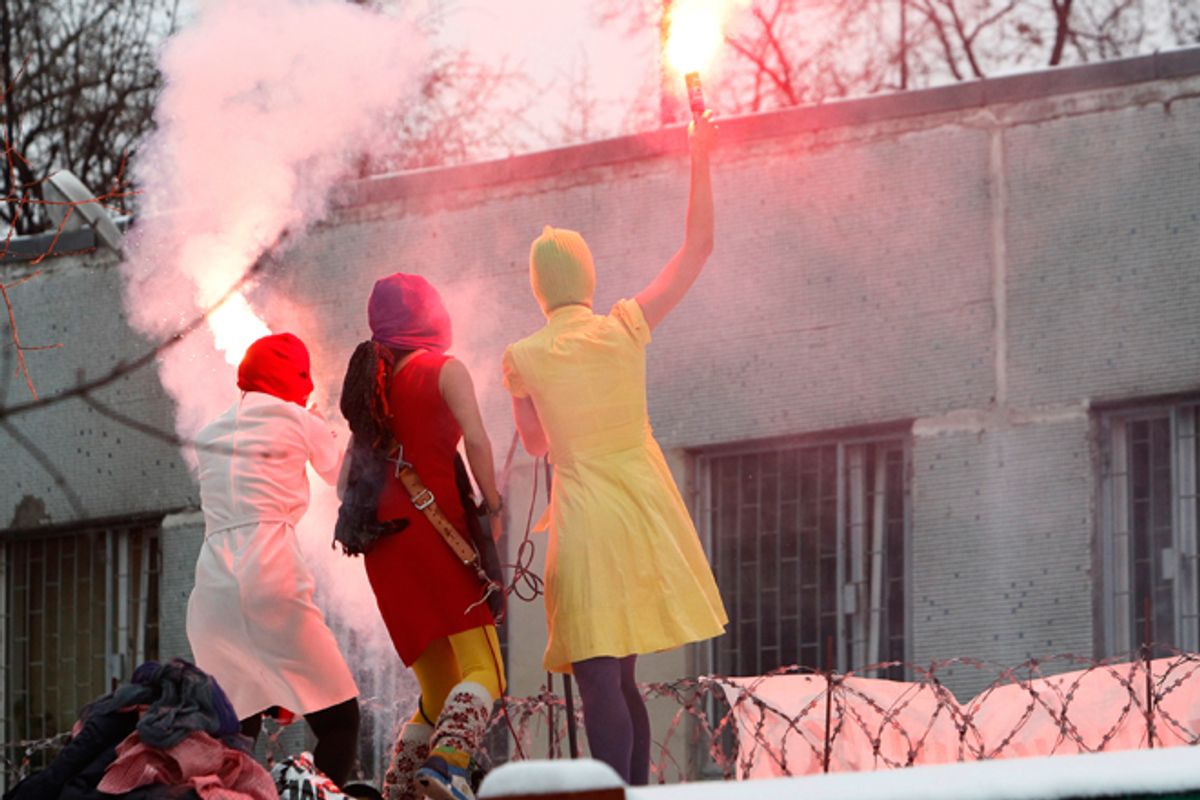 A Russian court yesterday ruled that three members of the feminist punk rock collective known as Pussy Riot will remain in jail, a crushing end to a day of rumors, reportedly out of the Kremlin, that Nadezhda Tolokonnikova, Maria Alyokhina and Yekaterina Samutsevich would be released on bail.

The three activists were arrested in March after allegedly staging a flash mob-style protest at Moscow's Cathedral of Christ the Savior on Feb. 21. Dressed in the group's signature scanty clothing and brightly colored balaclavas, Russian authorities say they and another performer walked up to the altar and launched into an impromptu performance of their anti-Putin, anti-church "punk prayer."

Parishioners and church officials hustled the women off of the altar in less than five minutes. A few days later, Tolokonnikova, Alyokhina and Samutsevich were charged with "hooliganism." If convicted, they face up to seven years in prison.

Their case has become an international cause célèbre. Performers have held benefits and tried to raise awareness of their plight, and there have been numerous "Free Pussy Riot" demonstrations across the world.

Amnesty International has deemed them "prisoners of conscience." More than 100 public figures within Russia have petitioned the country's Supreme Court; others have petitioned the Russian Orthodox Church to demonstrate mercy. Among those on hand to post bail in court yesterday was multibillionaire media mogul Alexander Lebedev.

Lebedev told reporters that the court ruling was "an incorrect decision -- unjust and unfair."

"Unfortunately, the judicial system is very much inclined to be part of what they call the vertical of power."

The "vertical of power" here is not just in the hands of Vladimir Putin. The women are arguably as much religious prisoners as they are political prisoners.

Over the last few years, Putin has cultivated a close relationship with the Orthodox Church, giving it the ability to amass fabulous wealth in return for its support. In return, the church exhorts the young to fight in Chechnya, consecrates new nuclear missiles as the nation's "guardian angels," and praises Putin's return to the presidency as "God's miracle."

Patriarch Gundyaev Kirill was mightily displeased by the sight of four women screaming “Patriarch Gundyaev believes in Putin / Bitch, better believe in God instead / The belt of the Virgin can’t replace mass-meetings / Mary, Mother of God, is with us in protest!” He has personally condemned the act as "blasphemous," claiming that “the Devil has laughed at us.”

His spokesman, Vsevolod Chaplin, was quoted in Counterpunch as saying, “God condemns what they’ve done. I’m convinced that this sin will be punished in this life and the next. God revealed this to me just like he revealed the Gospels to the church. There’s only one way out: repentance.”

The combined ire of Putin and Kirill may well be an insurmountable barrier for Tolokonnikova, Alyokhina and Samutsevich, who began a hunger strike last week when the court gave them only a few days to respond to the indictment. Somehow, prosecutors managed to produce a 2,800-page indictment for what was little more than a disorderly conduct charge.

In an opinion piece for the English-language Moscow Times, opposition member Vladimir Ryzhkov notes that "the hasty, biased and highly politicized trial has been marked by numerous procedural violations. The prosecutors' indictment even cites violations of Orthodox Church rules and practices, which is outrageous for a country whose Article 14 of the Constitution clearly states that the government is secular.

"In this sense, the trial against Pussy Riot differs little from Sharia courts in the North Caucasus."

"I absolutely do not hope for a positive decision in the women's case," their clearly demoralized lawyer Violetta Volkova told journalists yesterday, as Free Pussy Riot supporters shouted "shame" outside the courthouse. "They are keeping on with the hunger strike. I am very concerned."

The next court date is July 24. Last week, another member of their legal team told the Moscow Times that "the government is trying to avoid a scandal by closing the case and sending the girls to prison by mid-August."

While working to free their captive members, the "pulsating and growing body" that is Pussy Riot is still giving their guerrilla street performances and is always open to new recruits.  “We have nothing to worry about," a spokesperson was recently quoted in Counterpunch, "because if the repressive Putinist police crooks throw one of us in prison, five, ten, 15 more girls will put on colorful balaclavas and continue the fight against their symbols of power.”