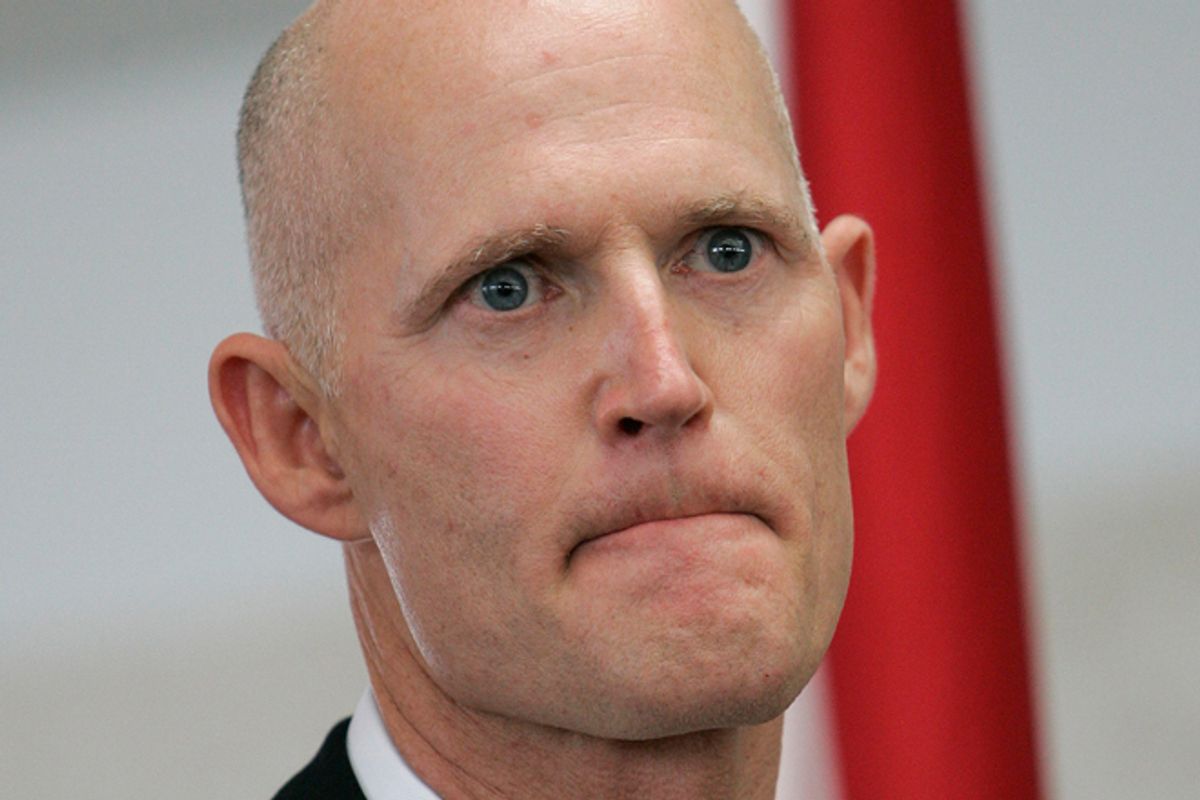 Jacksonville, Fla., is currently experiencing a large tuberculosis outbreak that has been linked to 13 deaths and 99 illnesses. At the same time as the outbreak, the state, citing a budget pinch, has opted to close AG Holley Hospital, one of the few remaining TB hospitals in the U.S. Much of the current media coverage has focused on the inconvenient coincidence of the two events, suggesting some sort of causal link between the two. The plausibility of a link is particularly tempting because there’s a certifiable bad guy, Republican Gov. Rick Scott, who signed the bill to close the hospital. But for once, Scott’s action, though ill-timed and tone-deaf, isn’t at the heart of the problem – or, for that matter, his biggest misstep.

For starters, take his decision to reject the federal government’s expansion of Medicaid after the Supreme Court upheld President Obama’s Affordable Care Act -- the type of healthcare spending that could have helped with the outbreak. TB is one of the few diseases that responds to money. If you throw enough money at TB, it goes away. Conversely, if you defund enough of the programs that are out there keeping it quiet, it sure enough will always (and I mean always) come back. If only the rest of medicine were so straightforward.

But the current Jacksonville outbreak didn’t start because AG Holley was closed. It started in Florida and countless other states in the late 1990s when TB cases nationally began to fall. Unable to resist the urge to tinker, a series of numbskull state leaders began to undo various states’ TB programs, including Florida’s. Somehow, bean counters always see any public health endeavor as ripe for cutting. The predictable cycle is this: Any good public health program fights hard to reduce the disease it sets out to control; but sure enough, each and every time success is met with a big thank you and a series of pink slips.

Plus, let’s be honest, public health types are not always fierce at the bargaining table (that is if they were even invited in the first place). They are the last Johnny Appleseeds out there, true believers that doing the right thing will always be rewarded; that truth and justice are the American way; and they are shocked – shocked – to find that gambling is going on here. As such, they seldom are positioned to win arguments with fire-breathing governors eyeballing the White House full-time, knowing that demonstrating that vague attribute called toughness (especially delivered to the already down and out) is the surest way to get there.

So, while the closing of AG Holley itself has nothing to do with the current outbreak, the austerity-loving attitude toward AG Holley and its ilk surely is at the heart of the matter. The specifics of this outbreak, published, oddly, in the American Journal of Psychiatry are the same as every other outbreak: A patient, in this case a homeless African-American man, has a cough. His cough is mostly ignored because people cough all the time and the clinicians are focused on his schizophrenia. Eventually, someone gets an X-ray (In Jacksonville it was eight months into the illness), TB is diagnosed and then public health workers scramble to locate the hundreds of people he might have exposed. In an adequately funded and sane healthcare system, information from previous visits, including old chest X-rays, might have been available; so too any relevant information about his TB status; perhaps an X-ray would have been easier to obtain (outpatient mental health facilities don’t often have the equipment) – all aspects of the “medical home” at the center of the ACA. Which is why it’s so distressing to see governors like Scott turn away additional Medicaid funding in order to make a political stance against President Obama.

Kent Sepkowitz is an infectious-disease specialist in New York City. He has contributed to The New York Times, Slate, Newsweek and O magazine.