His NAACP speech was jeered, but two black lawmakers say he could -- if he disowns some of his party's positions 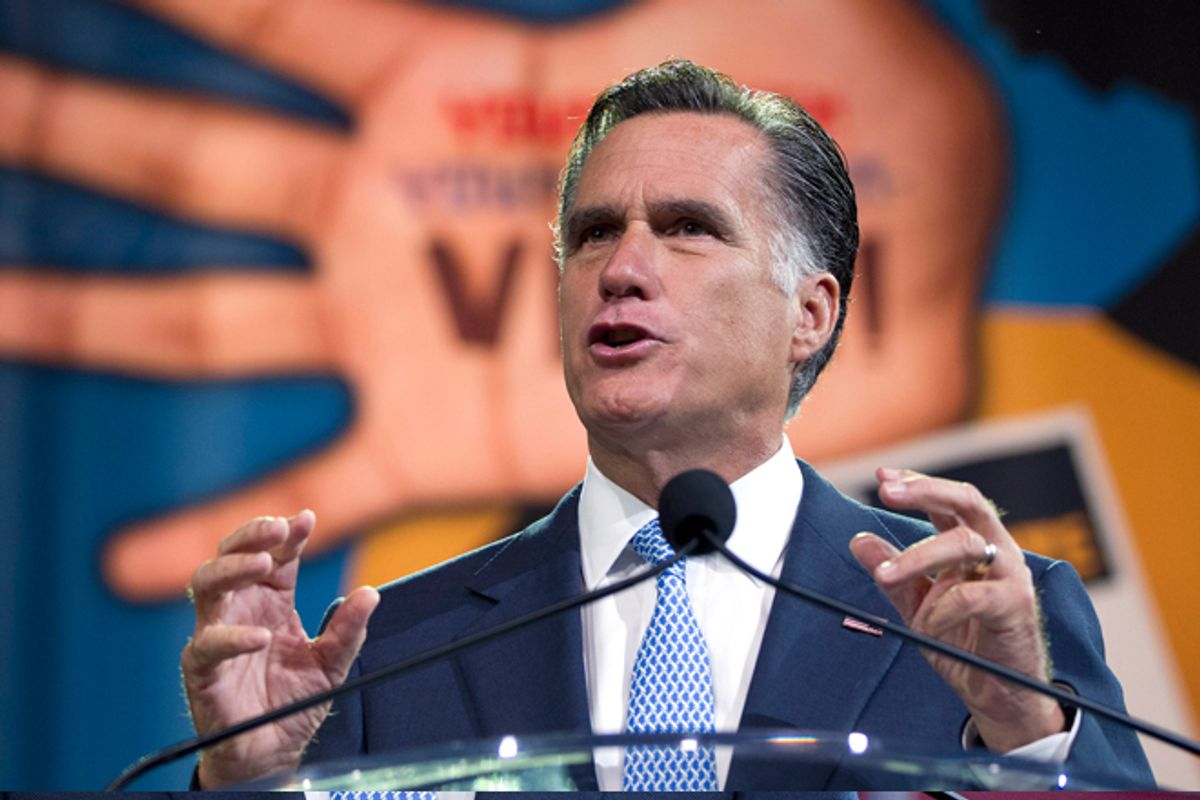 Romney gestures during a speech to the NAACP annual convention in Houston on Wednesday. (AP/Evan VUcci)
--

Mitt Romney addressed the NAACP today hoping to pick up some voters outside his traditional base, but were the boos that met his speech a sign that his hope of reaching out to black voters is doomed?

Many pundits dismissed Romney’s black outreach effort before it even started, noting the tremendous headwinds against him in trying to court this voting bloc: longtime hostility to Republican candidates, opposition to many of his policy positions and an opponent who secured virtually unanimous black support in 2008. Still, two African-American lawmakers who spoke with Salon today said it's possible for Romney to win significantly more black voters than anticipated. He would just have to change himself -- a lot.

"First of all, thank you, Mr. Romney, for your presence,” said Rep. Sheila Jackson Lee, a Democrat from Houston, where the NAACP convention is being held. But she said she would like to see Romney break with his party on a number of key issues, especially ones that disproportionally affect minorities. She would like Romney to support affirmative action, come out against voter ID laws and offer a strong affirmation that he would defend the Voting Rights Act of 1965 if elected president.

"We're giving him a lot,” Jackson Lee said of the NAACP speech, arguing that his presence will be a boon for Romney among moderate voters of all races. “We understand that we're giving him a platform to comfort the independents ... but I would expect him to make it clear, what is in it for you, the NAACP? What kind of respect will he give the NAACP? And, as well for other similarly situated organizations fighting for equality."

Asked how many black votes she thinks Romney could win, Jackson Lee said she figured the campaign would be happy to pick up any at all. “I think his campaign is calculating that, what risk does he have in peeling off any votes? He may get one. I can't speculate what his numbers are going to be,” she said. Still, nothing is set in stone: “All I can say is that African-Americans are not wedded to either party, we are wedded to our interests, and frankly, we have not been able to get much interest or focus in that from the right-wing faction of the Republican Party."

Rep. Gwen Moore, a Democrat from Wisconsin, said a Republican presidential candidate has already proven that it's possible to pick up a non-insignificant portion of the black vote. "Well, George W. Bush got as much as 11 percent. So those are a lot of votes if it comes down to a close margin. So I would certainly have to admire him for reaching out,” she said of Romney.

Moore drew a comparison to immigration and Hispanics, as many as 40 percent of whom voted for Bush in 2004, but who polls show are far less enthused about Romney. Moore said Romney probably won’t do as well as Bush did with black people, either, because of his support for voter ID laws. "What would I like to see him say?” she asked rhetorically just before the speech began. “Well, that he'll pull out of the race.