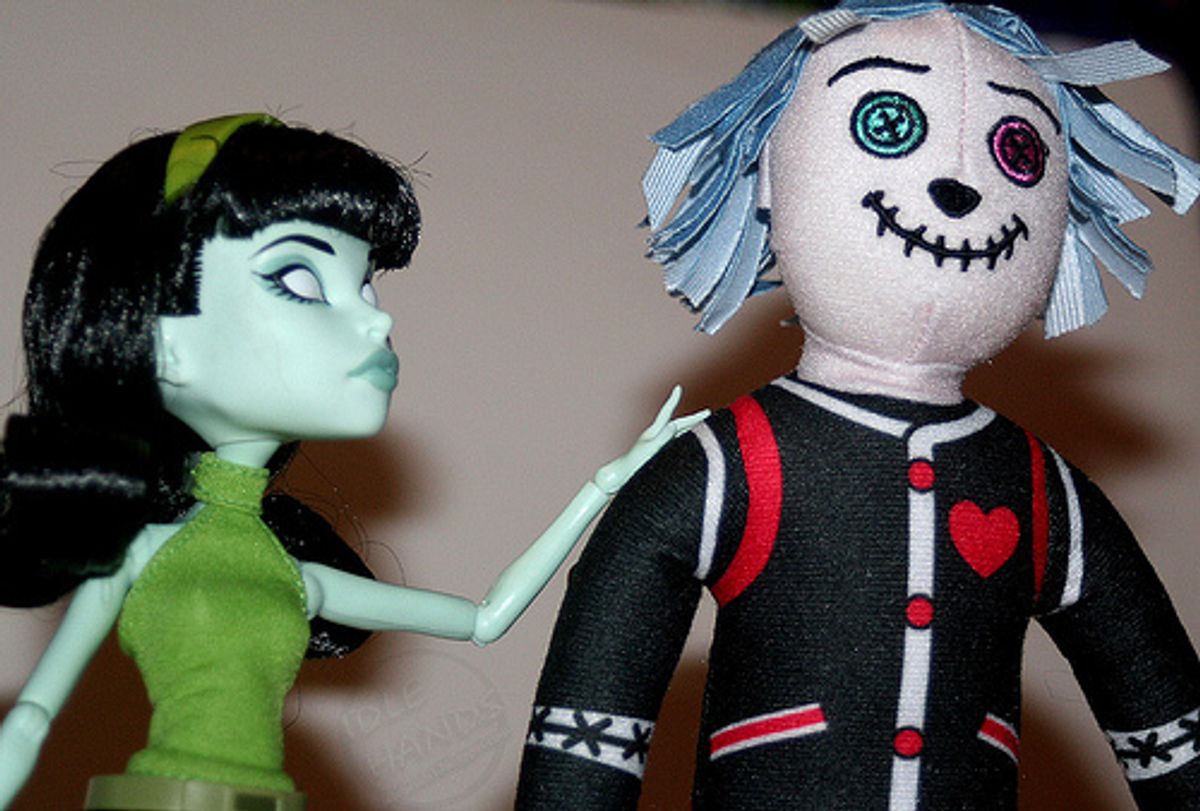 Last year, we gave the Mattel's Monster High series the lowest honor we bestow here on the Bitch blogs: The Douchebag Decree. At the time, Deb Jannerson had this to say of the franchise:

Well, what do you know? Hypersexualized, heavily made-up dolls with über-Barbie proportions. Not only are their waists much narrower than their heads; they're close to the size of one of their calves. The ladies are homogeneous in height, shorter than their few male counterparts so as not to be intimidating. The designated nerd, zombie Ghoulia (third from the right), is the only female to come with a pair of pants; mummy Cleo de Nile (second from right) appears to at first glance but is actually clad in strips of fabric prone to gaps and *wink-wink* wardrobe malfunctions.

These are the quintessential high school outcasts?

Though Monster High claims to be about celebrating differences (tagline: "Freaky is fabulous") the dolls themselves are very similar—not only to one another, but to their blond older cousin. Turns out the newest Monster High doll, which debuts this week at Comic-Con 2012, offers fans more of the same.

Like her Monster High classmates, Scarah Screams is the daughter of a classic monster—in this case, a banshee. According to the diary that comes with her, Scarah wears what she calls "monster retro fashion" and rarely uses her speaking voice at school because "it would just cause more trouble than it's worth." When fellow student Heath Burns makes her feel bad for wearing vintage clothes, she says nothing—speaking up would just make things worse. Presumably she's referring to the legend of the banshee—an Irish female spirit who announces death—with the voice thing, but a high school girl who's afraid to say something when a guy makes fun of her outfit is hardly role model material. Why couldn't her extraordinary voice be used for something cooler, like telling this Burns character to shove it?

Scarah Screams was chosen by fans at last year's Comic-Con to be the next Monster High attendee to make the transition from webisode/book/spinoff character to real-live plastic. Oddly enough, she comes with a BFF named Hoodude Voodoo—a male Monster High-er and "human-sized living Voodoo doll, created by Frankie Stein to be her emergency boyfriend. For this reason, he has a major crush on her." (Okay then WTF is he doing in the box with Scarah Screams? Doesn't she know he's Frankie's Voodoo doll?)

Plot holes aside (this Monster High wiki has me thinking that Scarah and Hoodude's BFFship was fabricated for Comic-Con), adding a Voodoo doll to the mix "for the sole purpose of being Frankie's boyfriend when she thought she needed one to connect with her friends" is a problem. Unlike, say, Frankenstein monsters or vampires, Voodoo is a real religion, practiced by real people who aren't just trying to fit in in school. And isn't it contrary to the "be yourself" ethos of the Monster High franchise that the main character would be so desperate to impress her peers that she'd make a fake boyfriend? How "fabulous" is that?

Okay, back to Scarah. We don't know much about this new monster yet, but we've learned so far that she's into retro fashion, she likes reading, and she doesn't like to use her voice at school. She's also Irish, in keeping with her banshee roots, and her diary is full of uncomfortable Irishisms like "boyo," "Janey Mack," "'tis and 'twas," "auld sod," and "wee." We get it! She doesn't need to write in the voice of the Irish Spring announcer to convince us, and kids probably don't need such an Irish stereotype for a doll either.

Lest you think no one cares about Monster High save for a few supernatural-loving tweens, keep in mind that a toy buyer friend of mine tells me these are the most popular girls' toys on the market right now. The announcement of the Scarah Screams doll made big waves on the Internet, the dolls are selling for upwards of $80 on ebay, and are set to do big business at Comic-Con.

As far as dolls go, this could be worse. At least Scarah Screams likes reading and has her own sense of style, right? And that Hoodude guy is supposed to be quite sensitive. Monster High is even part of a tween self-esteem initiative "to inspire tween girls to celebrate and embrace the unique qualities that make them 'perfectly imperfect' through specially created online content, downloadable activities, and an animated webisode." (So yeah, basically a chance to sell more dolls. Embrace your unique qualities though!)

The Monster High franchise encourages girls to be "imperfectly perfect" in the same way the dolls are: thin, feminine, and "freaky" in a socially acceptable (read: hot) way, and though Scarah Screams is new, she's no different. Sure, it could be worse, but when it comes to pop culture for girls, shouldn't we hope for better?