Celebs praised the late writer at a memorial this week. But her nannies attest she was also generous to her help 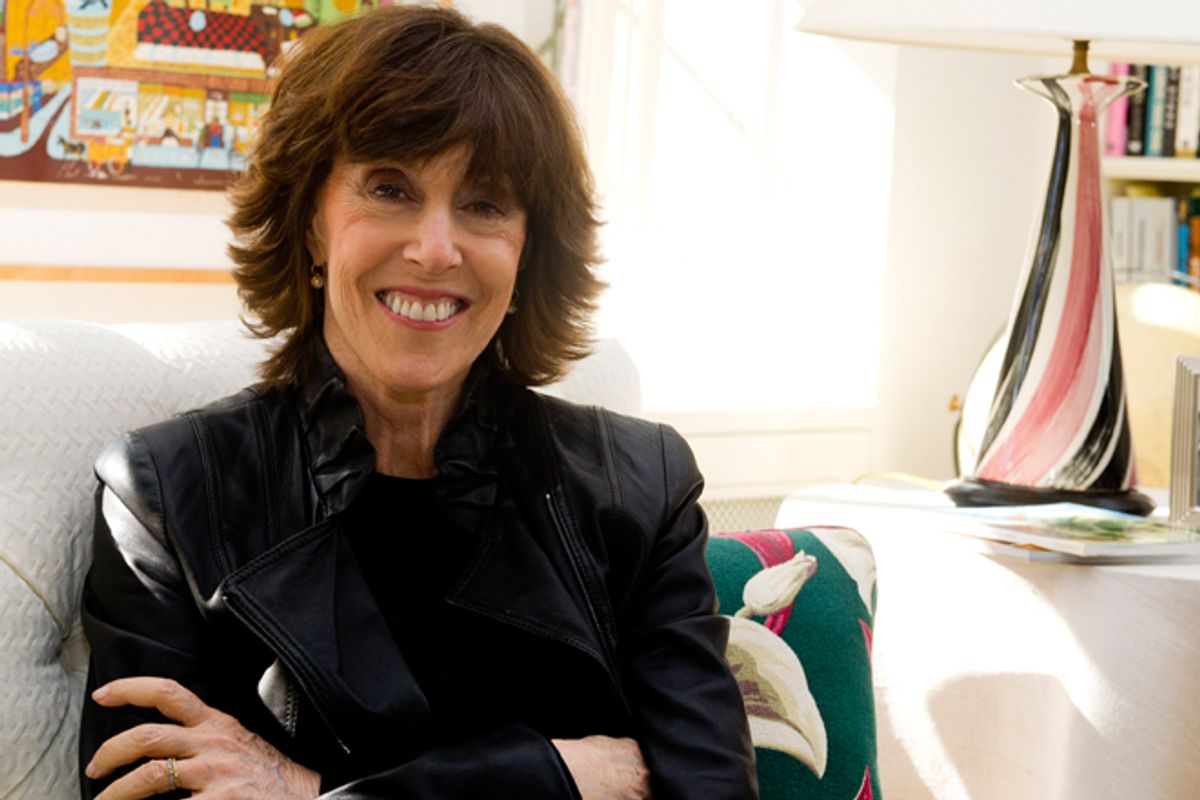 A lot has been written about Nora Ephron over the past week. She was a kind and generous person. All of this and more is true. The truly beautiful thing about Nora was that she was this way with everyone – her friends, her colleagues and most important to us, her help. We are three former nannies who took care of Nora’s sons, Jacob and Max, while they were growing up in New York City. We met each other working at a resort in Maine and became lifelong friends, but Nora is the bond that we share. This is our story.

Terry: I worked for Nora while attending cooking school in the late '80s. Every day I would return from school with a recipe for whatever French thing I had learned and Nora would pull out her worn and heavily annotated "Mastering the Art of French Cooking" and teach me her "shortcuts" to French cooking. The best was a dish involving leftover turkey, liverwurst and heavy cream. In addition to French cooking, Nora taught me if one stick of butter is good, two is better. Never dress a salad until you are ready to eat it, and people don’t eat cheese at parties because it gives them bad breath.

From the start, Nora treated me as though she had the utmost confidence in my capabilities — certainly more than I did. The very first week I was there, she informed me that she was having a dinner party but might be arriving late -- would I please make dinner and help Nick host if necessary? She threw together a menu and was out the door. I had baby-sat for Jacob and Max on occasion but she had no reason to assume I could “stand in for her” even for a minute. But she was right; it was fine.

She always appeared interested in what I had to say — whether it be an observation, a question or a problem. She talked about her work. She talked about the causes she believed in. Aside from the 30 minutes every morning when she drank her jasmine tea and read the three New York papers, there was never a time that I felt she was too busy if I needed her.

It was a fun house to live in. We’d all sit at the kitchen table doing homework. Nora would pull down the classroom-size map on the wall and ask questions during dinner. Jacob and I talked incessantly about music. Nora and Max were nonstop about the Mets. My cat Boxer was welcomed and became the family pet. (She had all of the furniture reupholstered shortly after we left but never made a sound about it while we were living there.) She let me take the kids to my hometown, Harrisonburg, Va. “They act like it’s Paris,” she’d say.

Nora was remarkably generous. My friends were welcome any time. When my entire family visited one holiday, Nora was away and offered us the apartment. When I got married, she offered her apartment and champagne and helped me throw the loveliest New York wedding. When I separated seven years later, Nora was one of the first people I called — to tell her I had joined “the Heartburn Club.” Her gift: “Trust me, in a year you will believe this is the best thing that ever happened to you.” And she was right.

On every visit, she would ask, “What are you reading?” and then walk around her apartment collecting books for me. I read Nora’s Thanksgiving recipe column in the HuffingtonPost a couple of years back and was at once reminded of her recipe for chocolate bread pudding. I sent her a note asking for it. She wrote back immediately, “On the bus. Will send as soon as I get home.” And she did. Last year, when I told Nora my niece Marit Rawley, a young independent filmmaker, was making a movie, she immediately agreed to sponsor her.

When I left Nora and the kids, I felt like a daughter leaving home. It wasn’t goodbye. It was “see you soon.”  The fact that a good friend of mine was stepping in helped a lot.

Sarah: Terry told me that Nora was looking for a nanny. I wanted to move to New York after college, and this seemed like the perfect opportunity. Of course, it was.

Nora shared with me her home ("You can help yourself to anything but the caviar") and her love of the city. She took me to Zabar's and showed me around, and invited me to dinner at Elaine's with Nick and the kids. She said there was no sense in spending time baking bread or making piecrust because you could find it perfectly made within a five-block radius, no matter where you lived in the city. Showing me how the subways and buses worked, she drew a map of the avenues and streets, marking an x where to drop off the kids at school on the other side of Central Park. I could only smile back at the stares I received on the crosstown bus by those overhearing Nora’s two adorable young sons discuss politics in 1988 during their commute.

One of the first mornings I was there, Nora mentioned the butter was too cold coming right out of the refrigerator. My first assignment each morning was to take the butter out so it could reach a more yielding state in time for breakfast.

When she invited me to come along to watch a scene of "When Harry Met Sally" that was being filmed in SoHo, we all took the subway.

My sister wanted to visit over Thanksgiving weekend, and I asked Nora if she thought we could get tickets to a Broadway show. Her response was, "If you think you can get tickets to a Broadway show on Thanksgiving weekend then I am a ballerina." She gave me the number of her scalper, and we saw "M. Butterfly" that weekend. She invited my sister to stay with us at the Apthorp.

I was always taken by the fact that she never locked the door to her apartment. But that is how she lived. She was fearless and trusting.

She invited me into her world, and helped me see that, I too, could have an interesting life.

When "My Blue Heaven" was being filmed near my hometown in California, she not only asked to meet my parents, but also invited them to be extras in the film. They are in the courtroom scene. I recommended an Italian restaurant to her and she later told me they ate there almost every night.

Nora presented the glass to be broken at Terry’s wedding, and, like magic, upon hearing its shattering the predominantly gentile guests all said, “Mazel tov!” Max played guitar at the reception using the tiniest Marshall stack my future husband and I had ever seen. Ed and I both sang.

When my band was touring the Midwest in 2003, the bartender of the club outside of Milwaukee handed me a small package. Max’s band had performed at the same club a couple of nights earlier. Max saw my poster and left a lovely note and a copy of his new CD. I was so touched that he made a connection after so many years.

In late 2009 I was looking for some freelance work and contacted Nora. She readily responded with suggestions, adding, “You should have some fun thing to do.”

When I had quit the nanny job to fulfill a desire to travel in Europe, I left Nora in good hands by recommending my friend Ed.

Ed: My job interview consisted of one question: “Can you start Jan. 1?”  No need for references or resumes, no questions about my culinary skills (which tended toward microwaving and opening cans of meat) or my knowledge of NYC (never lived there before). Obviously, Nora enjoyed a good challenge.

She endured my ineptitude in the kitchen with a bemused smile and patient but firm instruction, even when I committed the cardinal sin of Nora's kitchen: burning the butter. Nothing in my blue-collar Pittsburgh background had prepared me for Nora. Early on she asked me to pick up some cheese while I was out. I was almost out the door when I realized I should ask for details. "I don't know, something in a triple cream, a mild goat, and something else. Surprise me.” "Nora,” I replied, "I was going to come back with Kraft American singles-individually wrapped." Shopping lists were much more specific after that.

Gradually my cooking skills improved and I committed recipes to memory, dishes I still make today. I remember the day she praised my potato latkes better than I remember my first kiss. Family dinners were the highlight of the day. Conversations were wide-ranging, covering everything from Marilyn Monroe’s acting ability to professional wrestling to Yiddish. (“Ed, Jacob’s room is rather schmutzig, be a mensch and schlep out the vacuum, would you?”) I didn’t appreciate at the time what a privilege it was to be at that table night after night, but fortunately I Remember Everything.

After only a couple of months working for Nora, I realized our lives were up for grabs as material. "Everything is copy.” Over dinner one night, she asked how my parents had met. I told her the story my mother had told me -- that every building associated with my parents' courtship, engagement, wedding and reception had at some point burned to the ground. Her eyes lit up, and she excused herself. The next day she showed me a draft script of "When Harry Met Sally," complete with my parents’ story as one of the couple’s vignettes interspersed throughout the film.

I knew I had arrived when Nora entrusted me with roasting a chicken unsupervised, supported only by her recipe, and Jacob and Max cheering me on. When it was done, she pronounced her verdict. “It’s perfect in every way but one. It’s upside down.” A few years later, I was enjoying "This Is My Life" in the theater, in which Julie Kavner’s character hires a “manny” to watch her kids. Like me, his name was Ed. And yes, there was a chicken involved.

Nora was generous to all of us. I was an aspiring opera singer, and when she heard me practicing Puccini in my room, insisted I have two hours of uninterrupted practice. Later, she gave me the name of a top CAA classical music agent to call.

“Tell him Nora sent you.”