If the university wants to move beyond today's report, it must give up the team and mind-set that led to disgrace 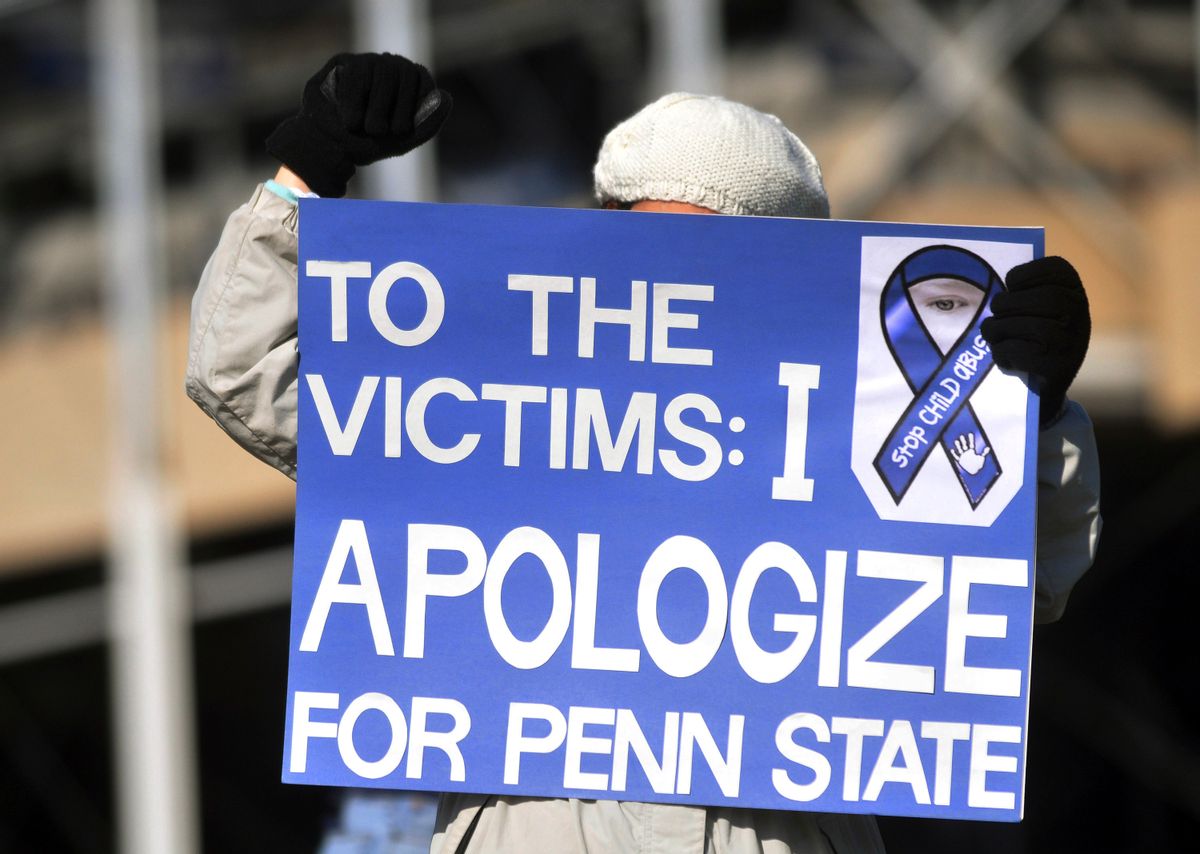 An unidentified protestor stands outside Beaver Stadium prior to the football game between Nebraska and Penn State last November. (Reuters/Pat Little)
--

For months I’ve been insisting that the Penn State child abuse scandal is not a sports story. This morning, after reading highlights from Penn State’s investigative report, I realize I was wrong. That is, this may not be a sports story, but it is most definitely a football story.

It isn’t even a football story because another assistant coach and former quarterback for the Nittany Lions, Mike McQueary, testified that he witnessed Sandusky abusing a young boy in the team’s locker room showers.

It’s a football story because all of the above and more, particularly that former Penn State president Graham Spanier, former vice president Gary Schultz and athletic director Tim Curley, according to independent investigator Louis Freeh, “All played a part in concealing the facts of Jerry Sandusky’s abuse.”

What Freeh did not add -- but is obvious to anyone who has followed the scandal from the beginning -- is that the principals in this case only looked the other way because the football program was involved. If this had happened in the economics department or the school of music or even on the soccer team, Sandusky would have been out of Happy Valley and behind bars faster than a Penn State linebacker sacking a quarterback.

No, it's clear that the reason everyone from the bottom to the top shut up about the whole thing was that it involved football. When you think of Penn State, you think of football first. It’s the cash cow, the money maker, the heart and soul of social life at the university. Joe Paterno didn’t understand what Mike McQueary told him about what he saw in the showers? Impossible. He understood exactly what was going on, which is precisely why he took the minimal action he was legally required to do and then turned his back.

Everyone involved was more afraid about the damage that would be caused to the football program than the harm – both past and future – to the young victims.

So it is, after all, a football story. And the only way out for Penn State is to face up to that fact and admit that things are never going to be the same again. By the time the board of trustees and attorneys get a handle on how much the upcoming blizzard of lawsuits is going to hurt the university, there may not even be a Penn State.

But there is a road back, and like all such journeys, the hardest part is taking the first step. Penn State fans, students and alumni must face up to the fact that Joe Paterno was a hypocritical phony with feet of clay. They must drop the holy iconic image of “Joe-Pa.”

Again, that’s the hardest part: What comes next is easy. Penn State must drop football.  That perhaps still seems unthinkable to many right now; it will not seem unthinkable in a couple of seasons when PSU’s new athletic department discovers what the rest of the country already knows: No top-flight talent is going to play for Penn State.

Penn State must drop football, or … turn it around from the profit-making machine that created the mind-set that led to this disgrace in the first place. That is, turn the football team into an instrument of healing.

All revenues from the football program – ticket sales, TV money, merchandising, everything – must go to charities and foundations dedicated to helping abused children and eradicating pedophiles like Jerry Sandusky. Yes, that means hiring a coach who will settle for far less than the salary of a coach at a Class A football factory like Penn State would normally receive. (And this goes for the rest of the coaching staff as well.) It means no more cushy athletic dorms and 150-piece bands traveling with the team.

This means, above all, fielding a team that knows it’s going to lose. This wouldn’t be too hard to take if Penn State people face up to the obvious fact that they’re going to lose anyway. A stripped-down program, though, of dedicated players who are there to win back the once-proud name of Penn State -- that is, players who are there to play for their college rather than for a crack at the National Football League, as, let’s face it, they all were during the Paterno era -- might succeed, in time, in winning people back.

It might even serve as a beacon for everyone else in college sports that it’s time to recheck the priorities. Monsters like Jerry Sandusky can show up at any college, and when they do, the old boy establishments in the athletic departments will coddle and protect them, then rationalize their actions by saying they did it for the school.