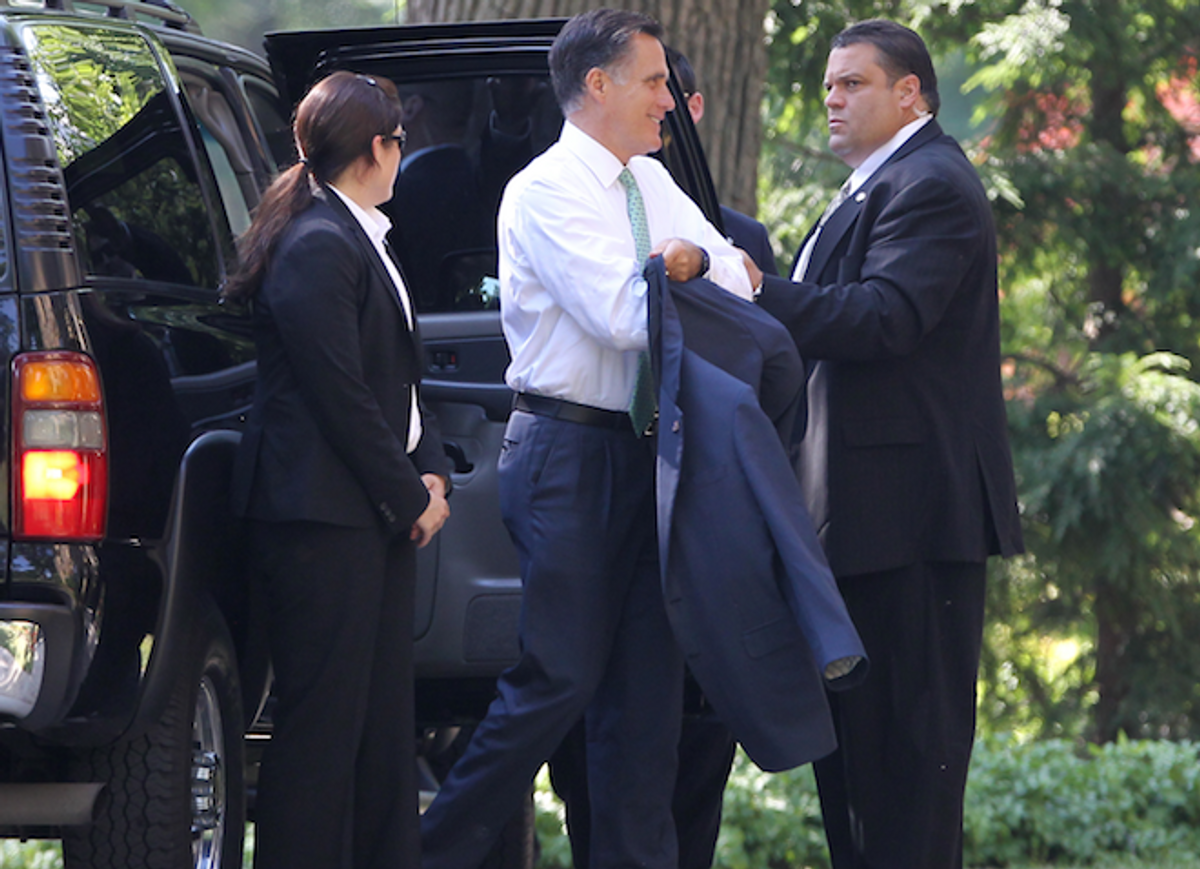 In his 2008 campaign for president, Barack Obama relied upon his biography as a tool not only to introduce and ingratiate himself with voters, but to deflect criticism. Indeed, at one point or another, critics ranging from Bill Clinton to John McCain to Sean Hannity complained that, like a fresh coat of paint on decrepit walls, Obama’s identity and personal story served to cover up what they believed were his underlying faults: inexperience and naivete (Clinton), celebrity allure rather than serious leadership qualities (McCain), or ideological radicalism (Hannity).

But as he seeks reelection in 2012, Obama would much rather prefer the media and voters to focus this cycle on Mitt Romney’s biography -- like, for example, today's revelation in the Boston Globe that Romney may have worked at Bain Capital much longer than he previously claimed. As evidenced by the steady stream of Romney-focused missives, press clips and talking points sent out almost daily (and typically four or five times daily) by the Obama campaign and Democratic National Committee’s press shop for more than a year now, Team Obama wants to create an image of the former Bain Capital executive as a rich, fat cat-loving, out-of-touch economic royalist whose policies and platform would destroy the American middle class. “The Obama campaign has been aware for at least a year that it must toxify its opponent,” Slate’s Dave Weigel wrote earlier this week, citing as specific evidence an August 2011 Politico story asserting that a “crazed” Obama and his advisers intend to equate Romney with the greedy Gordon Gekko of "Wall Street" movie fame.

As I argued here previously, none of this is very surprising: Politics 101 dictates that incumbent presidents with middling or low job approval numbers have to go negative against their challengers. What’s unclear is whether Obama’s economic populist critiques will work. After all, Obama’s populist record is mixed: undeniably strong on some issues (expanded healthcare coverage, student loans and payroll taxes), and spotty if not weak on others (Wall Street prosecutions and reform, extension of Bush tax cuts for the wealthiest Americans and job outsourcing).

So the question remains: Can Obama effectively and credibly “Gekko-ize” Romney?

Let’s start with the economic flap over outsourcing and trade that began the week on the cover of Monday’s Washington Post, because the controversy provides a perfect example of the strange tightrope Obama must walk. The president’s campaign has criticized Romney’s Bain Capital for profiting by shipping jobs overseas. But at the same time — and even if obstructionist congressional Republicans prevent Obama from achieving much — the president’s own protectionist record has disappointed some economic liberals. “I think he has walked away from the campaign commitments,” Robert E. Scott, director of the liberal Economic Policy Institute, told the Post. “He has done far too little to improve U.S. trade.”

Along with trade, Obama has also taken significant heat for slow-footing if not backtracking on economic issues that most directly affect middle-class Americans, including mortgage foreclosure and financial regulation reforms. Liberal critics of the president — like Yves Smith of NakedCapitalism.com, who a few months ago called Obama “the Great Deceiver” — have produced their own laundry lists of the president’s economic failures and disappointments.

By contrast, consider two recent and very explosive campaign story lines: the existence of Romney’s Swiss bank account and the Boston Globe’s story questioning whether Romney in fact left Bain in 1999, as he has claimed. Here the Obama camp can quite effectively pummel the Republican nominee. “I've never known of a Swiss bank account to build an American bridge, a Swiss bank account to create American jobs,” said Obama surrogate and Maryland Gov. Martin O’Malley, to cite just one notable example of the screw-turning that has begun and will surely continue through November.

Coupled with the GOP nominee’s earlier refusals to release multiple years’ income tax returns (presidents are required to release theirs), Team Obama will repeatedly use Romney’s personal wealth, and his lack of transparency about it, as an issue. Policy disagreements aside, Romney’s personal story — born into political and economic affluence; the Bain Capital investments that position him to become one of the richest presidents in history; the carried interest exemption that results in his embarrassingly low tax rate; the fact that he’s trying to hide key details about his fortune — is tantalizing easy to attack.

Somewhere in between, on issues like income tax policy, the effectiveness of Obama’s economic critiques on Romney could be mixed. As NPR’s Scott Neuman points out, it’s now an open question exactly who “owns” the so-called Bush tax cuts. To the disgruntlement of economic liberals, Obama already extended for two years the tax cuts, including for those earning more than $250,000 per year. Now that he wants to extend them again for all but the highest earners (his original 2008 campaign position), Republicans are again resisting.

Given the widespread public support for raising taxes on the richest Americans, packaging Obama’s tax plan as a tweaked version of Bush-era tax policy is electorally dangerous: It could both confuse swing voters and further alienate liberals who opposed the Bush tax plan’s net loss of revenues in the first place. As a matter of policy definition, the “Bush tax cuts” with the top earners removed might be more aptly known as the “Obama tax cuts.” Meanwhile, and on cue, Romney is already claiming that Obama plans to raise your taxes during a recession — a statement that is only true if “you” are one of the Republican nominee’s fellow 1-percenters.

Overall and despite whatever failings of his economic record, Obama — who may go down as one of the luckiest politicians in a modern era that already includes Clinton and George W. Bush — will be able to play the economic populist card with a reasonable degree of success because of his opponent’s biography. “Actually I'm delighted that Obama is posing as a populist. It’s a perfectly safe position; Romney can hardly criticize him for being in the pocket of Wall Street,” James K. Galbraith, a University of Texas economist who has been a vocal critic of austerity measures in response to the economic crisis, told me. “There are only a few grumps like me who might complain, but on what ground exactly? Inauthenticity? The notion that American politics rewards straight talk and honest position-taking went out of fashion quite a few decades ago.”

And even if the president, given his own economic record over the past three-plus years, struggles to advance economic populist critiques along policy lines, the Obama campaign will mount a powerful populist critique of Romney as a businessman and politician who literally embodies all that’s wrong economically with America right now. Moreover, as Paul Starr reminded me via email, the president can leave the dirty business of Gekko-izing Romney to surrogates like O’Malley and to super PACs. “Obama doesn't personally have to make this case and he shouldn’t,” quipped Starr, co-founder of the liberal American Prospect. “It’s being made by the super PAC Priorities USA. It can be handled entirely by surrogates. Isn’t that what God made them for?”