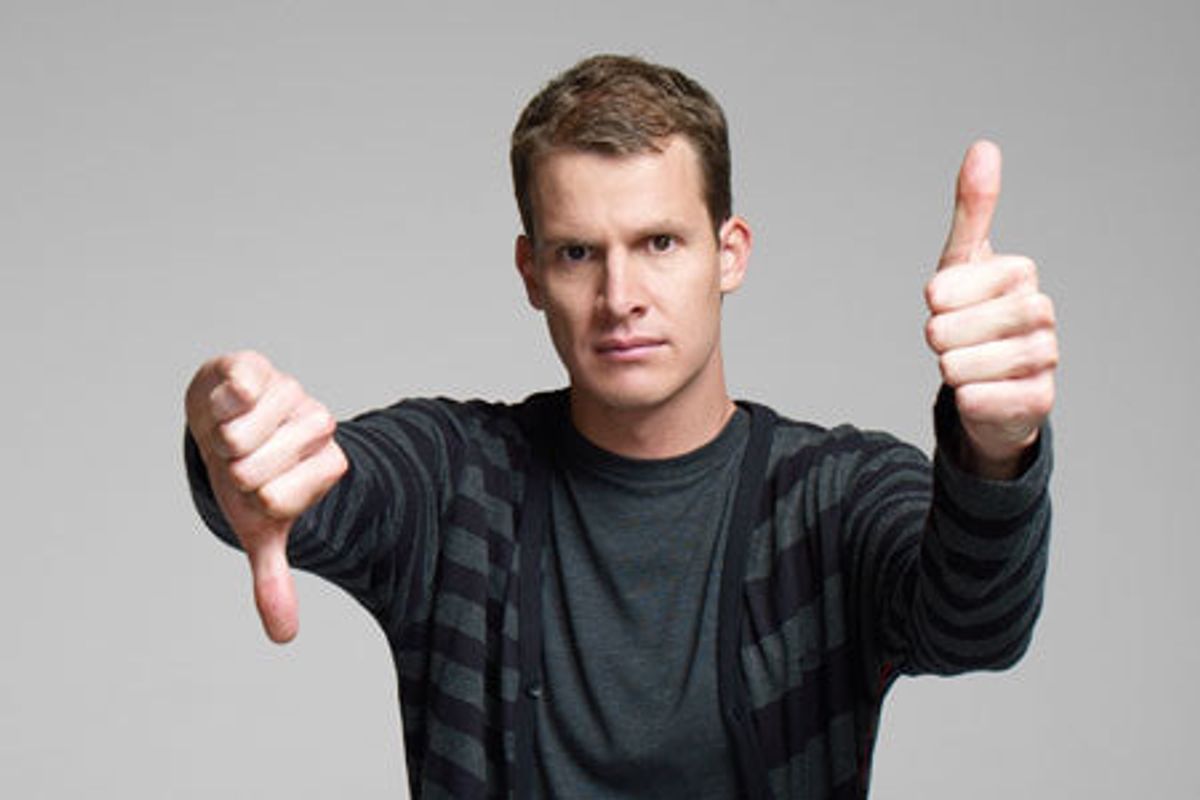 Rape jokes are pervasive in comedy. And this is the problem.

Daniel Tosh's controversial response to a woman in a comedy club last weekend has forced stand-up comedy to talk about rape culture. It is an emotional topic, and a conversation my fellow comedians are not used to having. And it has led to many other controversies and conversations -- about who is defending whom, who is laughing at what, and whether some things are ever funny in the first place.

As a woman, I'm surprised to see such a widespread conversation about how we talk about rape. But as a comedian, I'm even more surprised. One of the crazier things about the shock surrounding the Tosh story is that, as a comedian, what he said is not all that shocking. It's the reaction itself that comedians are reacting to.  And the conversations that have come out of the reaction will inform how we talk about rape culture in the comedy community.

Indeed, like one of those terrifying millipedes, this controversy gave birth to a thousand little baby controversies once it was opened up. It has led to conversations about if and how rape jokes can ever be funny; it has illuminated Tosh's history of laughing at violence against women; it has called attention to the horrifying statistic that one in four women has experienced sexual assault, and that those women are in the audiences of comedy shows. It's made some question whether it is ever right -- or only right -- for women like Sarah Silverman to make these jokes. It has also prompted comics to defend satire, to defend setups, to explain why interrupting a comic mid-joke is disrespectful and to remember all the terrible things they have said to hecklers to shut them down. But there is one really important controversy that we cannot let get away from the comedians: Why are there so many rape jokes in the first place?

The big controversies in the comedy world usually have something to do with gender, and sometimes they have to do with race (given the overwhelming white-straight-maleness of comedians, it may or may not be illustrative of a larger problem, and it's certainly worth noting). One of the most common flare-ups involves a male comic saying women aren't funny -- it's happened so much that we're all quite tired of it. But when controversies happen, conversations happen, and the “women aren't funny” controversy has happened so many (ridiculous) times, the conversation has actually started to sink in. For example, when Adam Carolla said that women aren’t funny earlier this summer, people simply rolled their eyes. Male comedians immediately condemned his remarks and Carolla was dismissed as an out-of-touch blowhard. The collective reaction was swift, generally unanimous, and, as a female comedian, just what I’ve always wanted.

But only a few months earlier, when then-David Letterman booker Eddie Brill made similar comments about women’s comedic abilities in a New York Times profile, things weren’t quite as clear-cut. I wrote about Brill’s comments, and although many male comics expressed their support to me in person, not many expressed their disapproval of a powerful person like Brill publicly. Jen Kirkman wrote about her frustration that women must constantly address this issue, asking, “Can guys take over for a little bit?” When it came time to react to Carolla’s remarks, men did just that.

With any conversation, the parties involved need to make sure they're talking about the same things. As far as I can tell, many of the comedians defending Tosh are having a conversation about jokes. Kumail Nanjiani, a comedian I've known for years and whose comedy I immensely respect, tweeted, “Do any of you truly believe Tosh would think it was funny if a rape happened in front of him? No. None of you do. It's called sarcasm.” On the other side of things, the woman who called out from the audience, and those now criticizing Tosh, are talking about rape. So we are talking about rape jokes, but it is comedians, not civilians, who stand on a stage and joke about rape into microphones. Right now, we're at an impasse, where comedians feel that they are the only ones who know what it's like to write and perform jokes for a living (which is true), and women (primarily) feel that those comics either don't know or don't care how it feels to be either a victim or potential victim of rape.

In this case, as with the “women aren't funny” controversy, male comedians now have an opportunity and a responsibility to stand up and be responsible. It is legitimate for them to defend their art form, but they need to hear what's being said. Many male comics quickly rallied behind their own, including Louis C.K., who sent a supportive tweet to Tosh the day the story broke. As time passed, though, the conversation continued. Patton Oswalt, who initially called the woman “self-aggrandizing” and “idiotic” on Twitter, has since issued individual responses to many of his fans who criticized his remarks. On Facebook, comedian W. Kamau Bell wrote:

For the record I'm anti-heckling & anti-rape but I'm waaaaaay more anti-rape than I am            anti-heckling. (If I have to choose. And apparently I do. Weird.) If every comic had to spend every minute of every set being heckled but nobody was raped, I'd be ok with that.

This controversy has an unprecedented potential to hold comedians accountable for their words. Rape culture permeates all aspects of our life, and it cannot single-handedly be dismantled. But what if, within the micro-culture of the comedy community, rape culture were suddenly challenged? Everything would change.

Comedians often explain the prevalence of rape jokes by arguing that our job as cultural critics is to push boundaries. But when we look at who is doing the pushing, where the power is concentrated, and how the outnumbered and out-privileged women are often the targets, the picture becomes more problematic. I understand and respect comedians' desire not to limit speech, but how they choose to use that speech will determine how quickly we move forward. If they care at all about the physical and emotional safety of the women in their lives, they should at least hear what those women are saying before they comment further.