The late writer's take on the Middle East 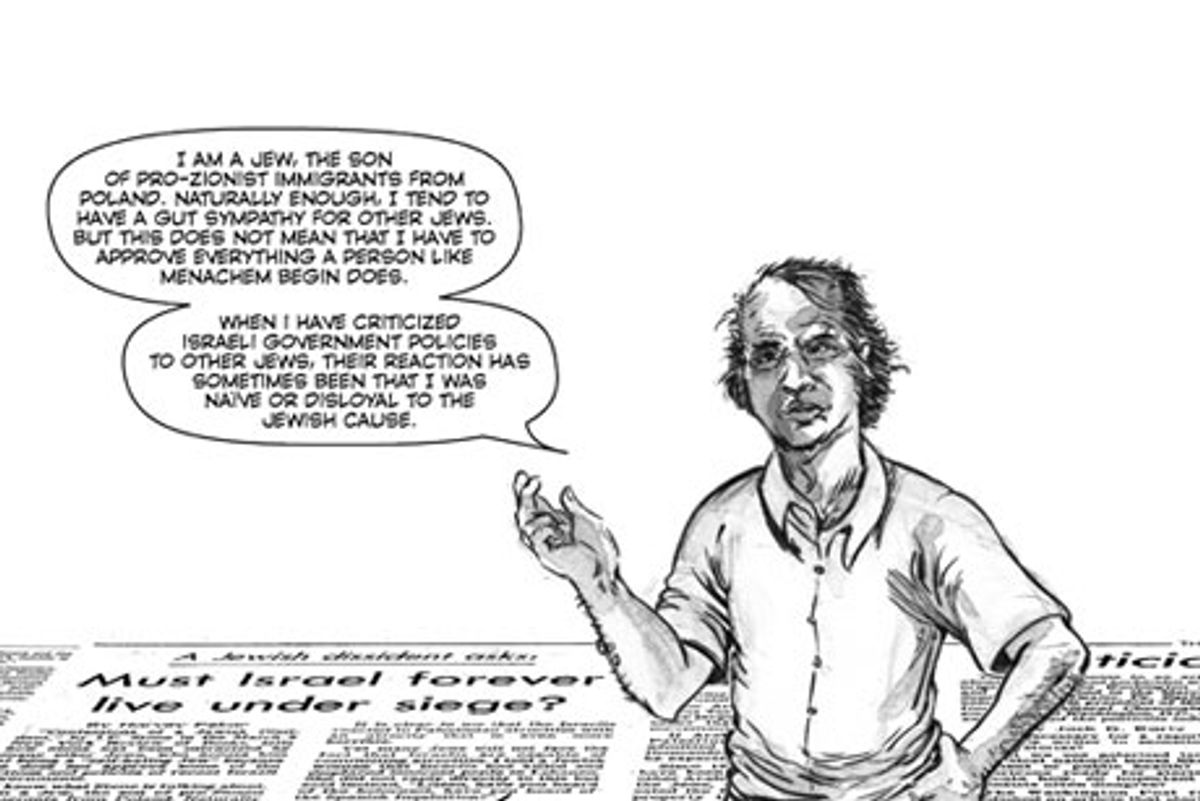 Harvey Pekar had been collaborating with the comic book artist JT Waldman on a book project, one that charts the journey from his Zionist upbringing to his questioning of Israel's role in the world. But Pekar died in July 2010. Still, Waldman continued to work on it, and now it's about to be published. Peter Kuper describes Not the Israel my Parents Promised Me as "an insightful look at one of the burning topics of our time. With Pekar's scholarship and humor and JT Waldman's stylistically varied art, this graphic book is both visually entertaining and highly informative."

I met Waldman when he presented to the Association of Jewish Libraries convention in Pasadena a few weeks ago. He was half of a "Jews in Comics" session (I'll get to the other half, with Arlen Schumer, in an upcoming column), and discussed his assembly of Not the Israel, both with Pekar and after his death. And as he previewed his pages, I was attracted to the variety of illustration techniques and design layouts he employed, which are much more ambitious and imaginative than the tedious, monotonous drawings and grids so often found in American Splendor stories.

Not the Israel will debut in mid-July at San Diego's Comic-Con, where Waldman will talk about his collaboration with Pekar. The following is our conversation about the book, and the reactions it might provoke.

What's your capsule description of Not the Israel My Parents Promised Me?

It's a graphic memoir that interweaves Pekar’s gradual disaffection with the modern state of Israel with a comprehensive visual history from Biblical times to the present. Told over the course of a single day in Cleveland, Ohio, the book follows Pekar and myself as we wrestle with the mythologies and realities surrounding the Jewish homeland.

Had you considered other titles?

The original title was How I Lost Faith in Israel, but I thought that was too inflammatory. So I pushed back with Harvey on that one. I also didn't like the idea of putting my name next to that, since I didn't agree with the statement.

Joyce [Brabner, Pekar's wife, who wrote the epilogue] came up with the title we now have. I thought it was a better title and played off the idea of the promised land, so it made sense. I even asked my own parents if they were cool with it and they gave their blessing.

How did you come to employ art historical motifs into Megillat Esther and Not the Israel?

Research, research, research. I surround myself with photocopies of art and downloaded images I find online, and just stare at them and absorb the aesthetics. And then when it's time to draw and select the right motif or style, the forms just sort of flow onto the page. I create by osmosis and then run with it.

How was the process for you this time around?

Totally different process in terms of drawing from reference photos and making things look "accurate," as opposed to just what looked cool in my head. Working with an editor and collaborator was totally different too.

Tell me about the panel shapes and decorative elements on your "birth of the state" page spread.

This spread was inspired by design elements in Charles Rennie Mackintosh's furniture design from the early 1900s. I wanted to use floral and embryonic images to contrast the violent and chaotic inception of the state of Israel that was happening at that moment. It seemed like an odd thing to do, to apply Scottish design to proto-Israeli nation building, but I wanted to connect these disparate events to the world at large, and this seemed like a clever way to do that.

And what about your use of Bauhaus graphics, such as Joost Schmidt's exhibition poster and Herbert Bayer's newsstand kiosk?

I'm so glad you noticed those homages! I wanted to convey a sense of the visual history of Judaism with the book by demonstrating all the aesthetic tropes that the culture has adopted through the ages, from antiquity to modernity. Tel Aviv was home to many Bauhaus refugees, and the whole form-following-function ethos is the lifeblood of the city. Just as I included propaganda art for the 1940s and mosaic style images for the Biblical era, I wanted the visual styles of the book to denote time and a sense of surprise as you turn the pages.

There are tons of "easter eggs" for art-history geeks throughout the book.

Do you anticipate any controversy?

I actually think the book won't be too controversial for today's readers. After [Peter] Beinart and so many other eloquent and bombastic arguments for a political change of course, I don't think Harvey's message is as drastic and controversial as it once was.

I think the general American Jewish public aligns with most of the opinions found in this book. Whether they can admit that publicly is another thing. I just hope that the book generates conversation and gets people talking again. If controversy stokes that dialogue, then bring it on!

And how have you prepared yourself?

I guess I try to stay abreast of what others are saying on blogs and news sites. But I'll let my opinions in the book speak for themselves.

.
You might enjoy The Insider's Guide To Creating Comics And Graphic Novels, now on sale at MyDesignShop.com.