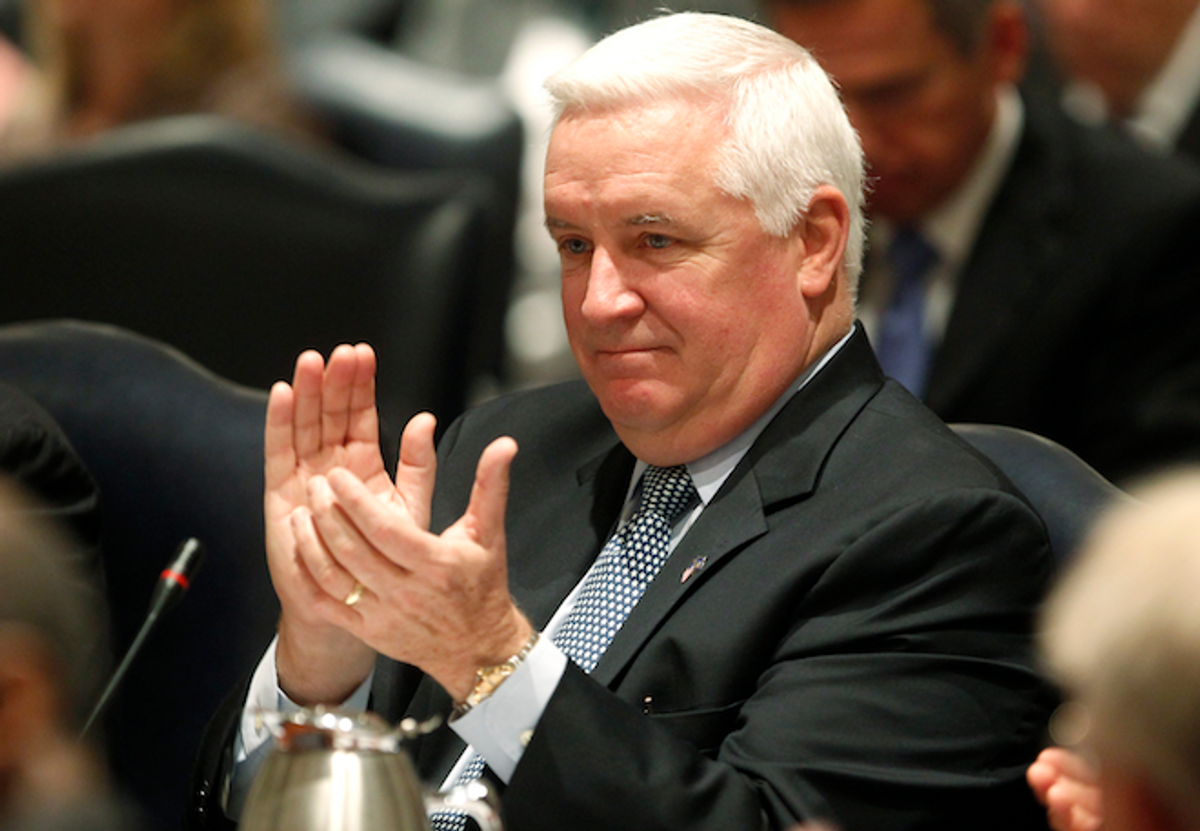 Pennsylvania has gone Democratic in every presidential election since 1992. Democrats have a nearly 1 million person voter registration advantage in the commonwealth. And last time around, Barack Obama crushed John McCain by 620,478 votes — garnering 54.5 percent and the state’s largest majority since Nixon’s 1972 landslide.

But like many so-called swing states throughout the country, Pennsylvania took a hard right turn in 2010 when the Tea Party took over the mainstream of the Republican Party. Pennsylvania now has a Republican state House, Senate, attorney general and governor. One of our senators, Tea Party Republican Pat Toomey (also elected in 2010), is the former head of the Club for Growth. Our governor, Tom Corbett, was one of the original then-attorneys general to sue the Obama administration in 2010 over the Affordable Care Act. At one point, Corbett pushed so hard for an invasive ultrasound bill, he told the capitol press corps that women just need to “close [their] eyes” to avoid seeing the government-mandated fetal video.

And buyer’s remorse abounds. According to the last statewide Quinnipiac poll, taken a month ago, Corbett’s approval rating stood at 36 percent — an all-time low. Presidential polls conducted by firms like Public Policy Polling and Quinnipiac have regularly shown Obama with a comfortable lead in the state. The most recent statewide poll, conducted by We Ask America, has Obama up by 7. No polls have shown Romney winning the state, or even coming close.

But the state’s GOP isn’t letting those polls get in the way of power. They know if Obama loses Pennsylvania, he will likely lose the election — especially with states like Wisconsin and Florida in play. And with their newfound power, Pennsylvania Republicans have done virtually everything they can to turn this rung of the Rust Belt red for the first time since George H.W. Bush won the state in 1988.

The most infamous idea to push the electorate right in Pennsylvania is the American Legislative Exchange Council-approved voter ID law. That law, similar to models passed in Texas, Tennessee, Georgia, Wisconsin and five other states, would require a government or school-issued photo ID at the polls. It could be a military ID, driver’s license, passport, one issued by a care facility or a non-driver’s license. Many have criticized the need for such a bill. After all, there were 11 total instances of voter fraud in Pennsylvania between 2000 and 2008, eight of which were attempted by the same person. But whatever. The Legislature agreed this was an issue that needed to be dealt with.

Since the bill was introduced in the state House last spring, it was called a “solution in search of a problem” by members of the marginal Democratic minority in our state capitol. It would eventually pass 108-88. In March of this year, the state Senate passed the bill and Gov. Corbett signed it a week later. During his statement on signing the bill, Corbett dismissed the argument that there is no evidence of voter fraud, saying, “I don’t necessarily agree with that," and insisted the law “does not interfere with anyone’s legal right to vote.”

Except that it does. An ACLU lawsuit on behalf of several plaintiffs alleges just that. And among the plaintiffs is Philadelphian Viviette Applewhite, who will not be able to vote in November, after having done so for most of her life, because she cannot gain access to ID. That case begins in Harrisburg on July 25.

What might be worse is the Corbett administration’s complete lack of background info on how many people this issue would affect. Around the time the bill was signed, the administration estimated about 1 percent of Pennsylvania residents lacked proper ID to vote.

But last week state officials released the real number: 9.2 percent, or 758,000 registered voters, actually lack proper identification. And in Philadelphia — a Democratic haven, which, along with Pittsburgh, often tips presidential elections — the number lacking proper ID is up around 18 percent, or 186,830 voters.

To put all that in perspective, President Obama won the 2008 election by 620,478 votes, which is less than the number of statewide voters lacking proper ID. Philadelphia alone represented more than 400,000 of that margin. Which has led many locals in the City of Brotherly Love to question the GOP’s motives.

Philly activist Faye Anderson has begun a national Web app called Cost of Freedom, in which she lists the rules for voting in all states where voter ID laws exist. She has noted on separate occasions to Philadelphia Weekly, where I work, that many Pennsylvania women — especially newlyweds — will be unable to vote come November.

“Women are disproportionately impacted because 90 percent of women change their names following divorce or marriage,” she told us, citing Brennan Center data. In addition: “Only 66 percent of women have an issued photo ID with their current name.”

Only Democrats in the state called the bill what many across the country believe it is: voter suppression, meant to stop minorities, the elderly, students and, in some cases, women from voting (and, therefore, tip the election toward Republicans). That is, until late last month when Pennsylvania’s House Majority Leader Mike Turzai let the cat out of the bag: “Voter ID, which is gonna allow Governor Romney to win the state of Pennsylvania, done,” he said at a recent Republican rally to a cheering crowd.

Turzai’s candid comments drew ire from Pennsylvania Democrats and liberals across the country. His spokesman later walked back the statement, saying, "He was simply referencing, for the first time in a long while, the Republican presidential candidate will be on a more even keel thanks to voter ID." Still, a video of Turzai’s speech went viral on the Internet and cable news. And not because Turzai had said anything anyone didn’t already know. The news was: He actually said it out loud.

Since then, there’s been a statewide, administration-ignored backlash from citizens’ groups, with more influential groups throughout Pennsylvania calling for the bill’s implementation to be suspended. These include Advancement Project, Common Cause, the League of Women Voters, the ACLU and the AFL-CIO. Philly good government group the Committee of Seventy recently noted they were “urging Governor Corbett to go to the leaders of the General Assembly with a bill to delay implementation of the voter ID law for at least one year so all the state’s 8.2 million voters can be properly educated about the voter ID law and people who do not have a photo ID for voting can have ample time to obtain one.” Pennsylvania pollster Terry Madonna notes today, “We should simply suspend implementation of the new law until an election or two of trial runs shows us how it works and with what effects. Rolling it out in the middle of a presidential contest is sheer folly.”

Thus far, all calls for implementation suspension have been rejected by the Corbett administration.

Randy LoBasso is a staff writer at Philadelphia Weekly, where he writes about local, state and national politics. Follow him on Twitter: @RandyLoBasso.