The Higgs boson and other moments of transcendence 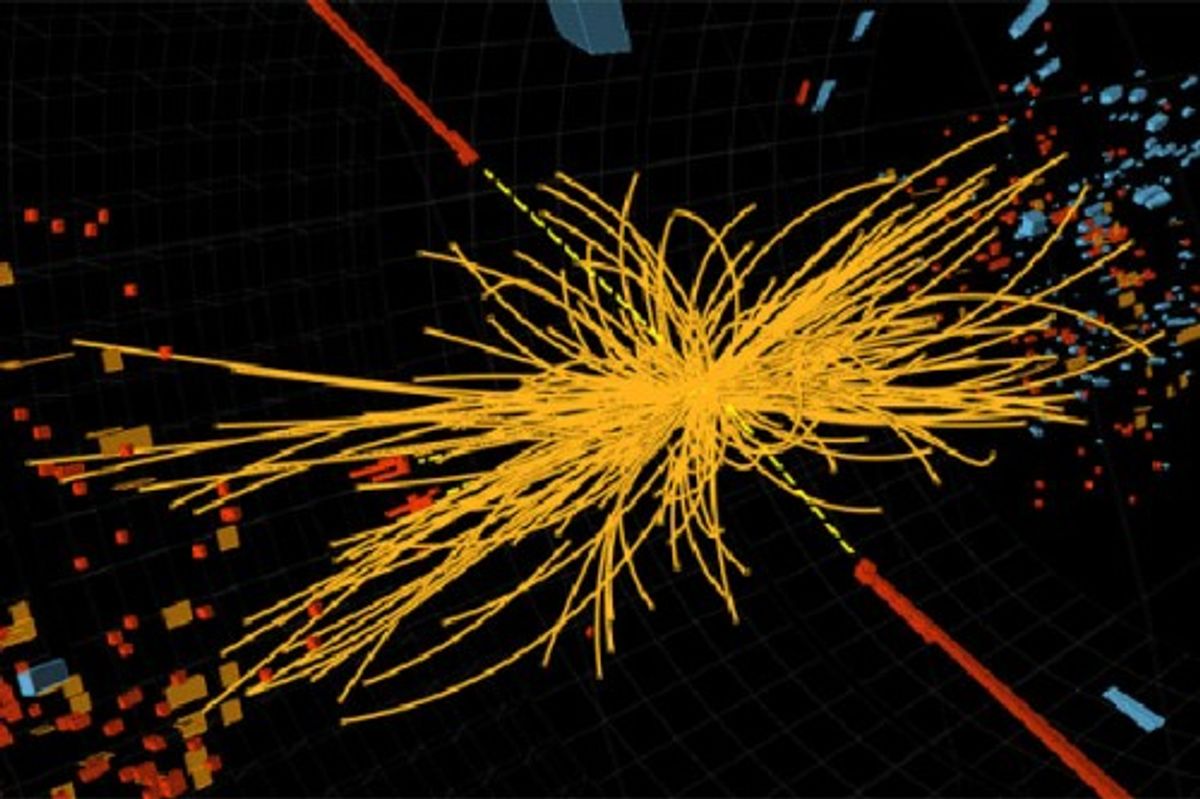 IN GEVEVA A COUPLE of weeks ago, some profoundly smart people overseeing the Large Hadron Collider seem to have located the Higgs boson—the so-called God Particle. Since then, they have been trying to tell us what it is. It may or may not be the root of all matter in the universe. It may be a particle, and if it is, it is the particle that gives all other particles mass. But it also could be a field or a wave. Also, if you manage to produce a Higgs boson, a thousandth of a billionth of a billionth of a second later, you will no longer have a Higgs boson.

A story in the New York Times suggested that a good way to think about how the Higgs boson’s relationship to matter is: “Particles wading through the field gain heft the way a bill going through Congress attracts riders and amendments, becoming ever more ponderous.” That’s not a good way to think about anything. Even National Geographic, which may not have any great purchase of the Standard Model of Physics but is, at least, scientific, could only establish that the scientists are 99% sure there’s only a one-in-a-million chance they’re wrong about finding the Higgs boson or “something of the like.” I talk like that a lot, but I’m full of it. Perhaps not so much, though, as the eminent Nobel Prize-winning physicist who before the boson was actually found called it a “toilet” because according to the New York Times “that’s where all the ugly details that allow the marvelous beauty of the physical world are hidden.”

These people are obviously on to something; I think we can all agree on that. But until they can tell us whether it’s a syrup or a molasses or an “entity” (my favorite) or a wave or a field or a thing, it seems premature to announce that they’ve found the key to affirming a grand view of the universe.

In a recent broadcast of the radio show “Smiley and West,” Tavis Smiley asked Cornel West what he thought of the discovery of the God Particle. This set West to laughing. He said he thought it was “a magnificent thing to see the human imagination wrestling with the mystery of the universe.”

“Finite minds, fallible minds, revisable claims …” West said, and both men chuckled. On NPR’s “On Point,” news analyst Jack Beatty used as a metaphor a description of privacy from Supreme Court Justice William O. Douglas: “Privacy exists as a penumbra based upon an emanation.” Beatty and host Tom Ashbrook cracked up.

The more I read, the less I understand. The Higgs boson helps us understand dark matter; it doesn’t help us understand dark matter. It will change life as we know it; it won’t change anything—it’s just a marker in human understanding. I imagine it will have some unexpected benefit on down the line: Tang, Velcro, the Internet; maybe it will get innocent people out of jail and cure some disease. But for now, it’s a little like Miles Davis pinning down modal jazz: Good for him, and good for my ears, but you can’t explain it to me. I just don’t know enough about what you’re talking about.

A few years ago, Martin Scorsese singled out Wes Anderson as a director he admired. He described a late and exhilarating scene from Bottle Rocket by calling it a “transcendent moment,” and then said, “Transcendent moments are in short supply these days.”

Great ideas feel good. If you can explain them. The good folks at the Hadron Collider either just experienced a transcendent moment or they’ll find that they didn’t but thought they did, but as Cornel West so rightly put it, it’s a “beautiful thing” to see them try. Our transcendent moment is in their effort, that they may have located something that preceded the Big Bang—a concept that makes almost no sense to me. They have raised their hands and said, “We have a great idea. We just can’t explain it to you right now.”

Magnificent. But not that much fun.

We have, however, had a few transcendent moments lately, results of the human imagination wrestling with the mystery of the universe. In the face of something as humbling as people unlocking the mystery of cosmic existence and me and most of the people around me having zero fun with it, I offer three alternatives. I’m 99% sure there’s only a one in a million chance I’m wrong about their importance.

There are soccer tournaments and there are Beautiful Football Moments. As Beautiful Football Moments represent sublime achievement within the game more people play and obsess on this planet than any other, they are notable human landmarks. Spain just won the championship of European football with a once-in-many-lifetimes generation of players but more importantly, with a style—a kind of soccer modal jazz that allowed them to play through the capable Italians by an overwhelming 4-0 score despite missing two key players. It wasn’t just that match: They won the last Euros too, and a World Cup in between, and they’ve gone 10 knockout matches without conceding a goal—that’s over 900 minutes of football against the world’s best opposition, and Spain is ahead 14-0. This summer was Spain’s “Kind of Blue” moment: A satisfying and glorious artistic culmination of years of rhythmic practice, virtuoso talents improvising their way to brilliance as we’ve watched. They have cracked the code, as near as we can tell. Just as you could hear Smiley and West smiling through the radio, you could hear the smiles at NPR’s Morning Edition as they announced that the Supreme Court had upheld the Public Mandate. And you could hear their confusion too, as they determined, over the air, that it seemed to be because of Chief Justice John Roberts. I don’t know if I would agree with Roberts on much, and it’s possible that he buried a few landmines in his decision (the Medicaid Particle may be a wave), but he’s obviously a wise and kind soul with a rare characteristic in modern American governance: An eye for the health of the Union, of all things. It’s amazing how often Bush v. Gore comes up in the discussion of the Court’s consideration of the health care case, but it’s more amazing to consider that our little developing-nation/can’t-count-our-votes moment in 2000 had some small part in helping this great man arrive at this decision. “Finite minds, fallible minds, revisable claims” indeed. I know, I know, Anderson’s not for everyone. All those red berets and yellow titles and strange Bill Murray roles, all that carefully staged slo-mo. If you’re totally over it, I get it. But no one—no one—is better at using his idiosyncrasies to tell simple stories. Rushmore: Two guys want the same girl. Royal Tenenbaums: A wayward dad wants his family back. Moonrise Kingdom: Runaway lovers (who just happen to be 12). Anderson’s latest has a lot of nice moments, but here are my favorite: 1) A dog dies. As the twelve-year-old lovers kneel over him, the girl says “Was he a good dog?” The boy says, “Who’s to say?” 2) Late in the film, as the boy is surrounded by the Khaki Scouts from whom he has fled, he raises an arm and shouts, “From where the sun now stands, I will fight no more forever.” That line is attributed to Chief Joseph of the Nez Perce, who was chased around Oregon and Idaho by Union soldiers in the 1870s, and it is recognizable to students of Northwestern history, but I don’t imagine it rings a bell much beyond that. I enjoyed knowing where it came from, but mostly I was humbled that Wes Anderson had woven it into a mostly comedic major motion picture.

Speaking of NPR, not so long ago they did a story about a crackdown in the Catholic Church. The basic idea was that the organization was happy to shrink to a smaller, more hardcore group of people comfortable taking direct orders from HQ in Rome as opposed to sorting through the Bible’s teachings within the context of their local parish communities. In the story, one Fabian Bruskewitz, bishop of Lincoln, Neb., explained Church doctrines this way: “These are what God has revealed, and the custody of that revelation is, of course, in the possession of the church.” Poor guy, I thought, going through life believing that. God’s revelations in the custody of a group of people. What the God Particle is he thinking?