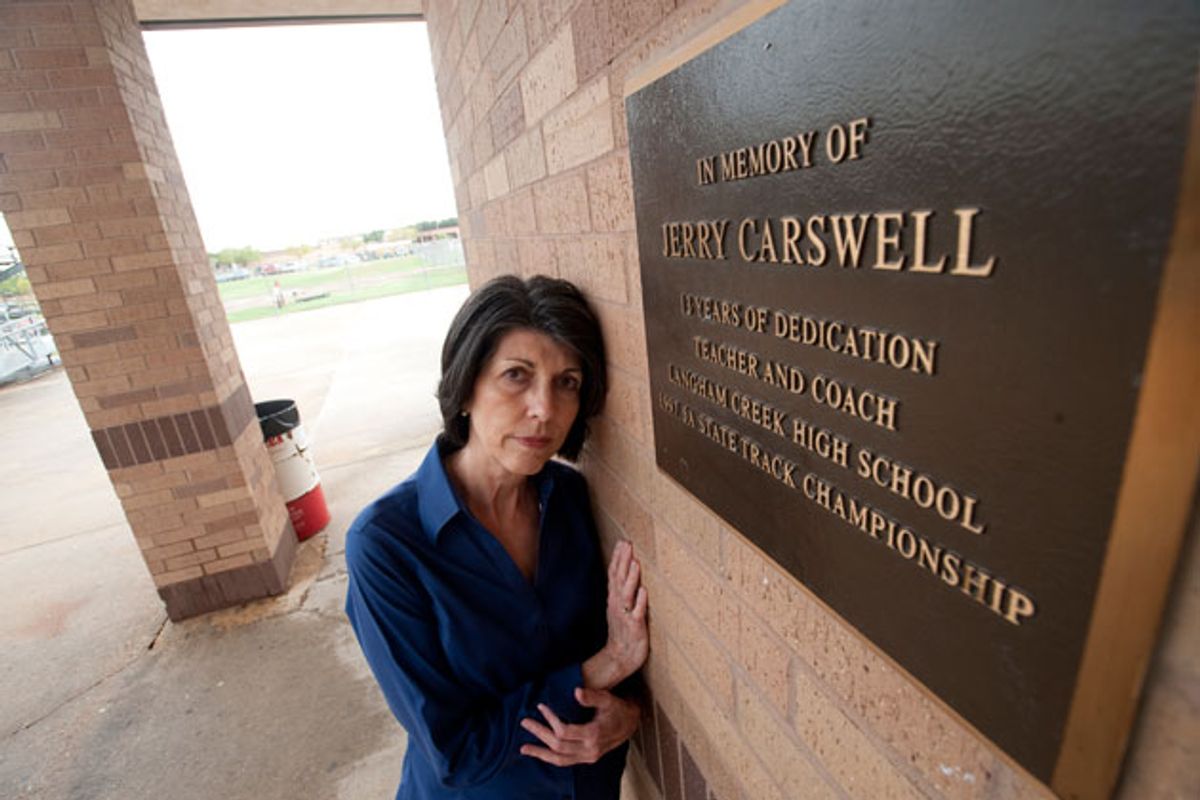 Linda Carswell poses at the Langham High School track by a memorial plaque for her husband. Her lobbying and testimony played a crucial role in the Jerry Carswell Memorial Act, a new informed consent for autopsies bill passed in Texas this year. (Sharon Steinmann/ProPublica)
--

After more than eight years, Linda Carswell finally has proof: According to photographs submitted as evidence at a recent court hearing, her husband's heart sits in a locker in the morgue of St. Joseph Medical Center in Houston, stored in two plastic tubs.

But the hospital still won't return it so that Carswell can bury it with his body.

ProPublica wrote in December about Carswell's battle for the heart, and for answers about her husband's unexpected death. Jerry Carswell, 61, went to a different Houston-area hospital for kidney stones in January 2004 and was found dead in his bed after receiving pain medication on the day he was supposed to be released.

The family's experience showed how problems with clinical autopsies — which are conducted on just 5 percent of patients who die in hospitals and rarely include toxicology tests — can thwart survivors’ ability to determine what happened to their loved ones.

The pathologist at St. Joseph Medical Center who conducted Jerry Carswell's autopsy never determined a cause of death. Linda Carswell sued Christus St. Catherine Hospital, the facility that treated her husband, in Harris County District Court, losing a claim for negligence, but winning a $2 million award for fraud based on the handling of the autopsy. Christus St. Catherine is appealing the verdict.

An opinion issued in June by the Texas Supreme Court says a deceased person's next of kin is entitled to possess his body and bury it. That's standard practice nationwide, said Dr. Victor Weedn, a lawyer and pathologist who is professor and chair of the George Washington University department of forensic sciences.

Weedn said he doesn't see why the hospital couldn't give Jerry Carswell’s heart back and warned that it could be incurring liability by keeping it.

Erin Lunceford, an attorney for St. Joseph, told ProPublica that the hospital realizes it could be sued for the organ, but is concerned that turning it over would violate a judge's order during the negligence case to preserve evidence.

The ongoing saga turned Carswell into an advocate for improved autopsy laws and other patient rights. She said her prolonged legal struggle illustrates obstacles encountered by those harmed in medical facilities — the type often cited by members of ProPublica's Patient Harm Facebook group. Patients and their loved ones can't get answers to basic questions, encounter roadblocks in obtaining medical records and are not treated with dignity, she said.

"They don't understand the human meaning of this at all," Carswell said.