The Libor scandal is spreading to the United States. Will the Fed be a hero, or is it already a villain? 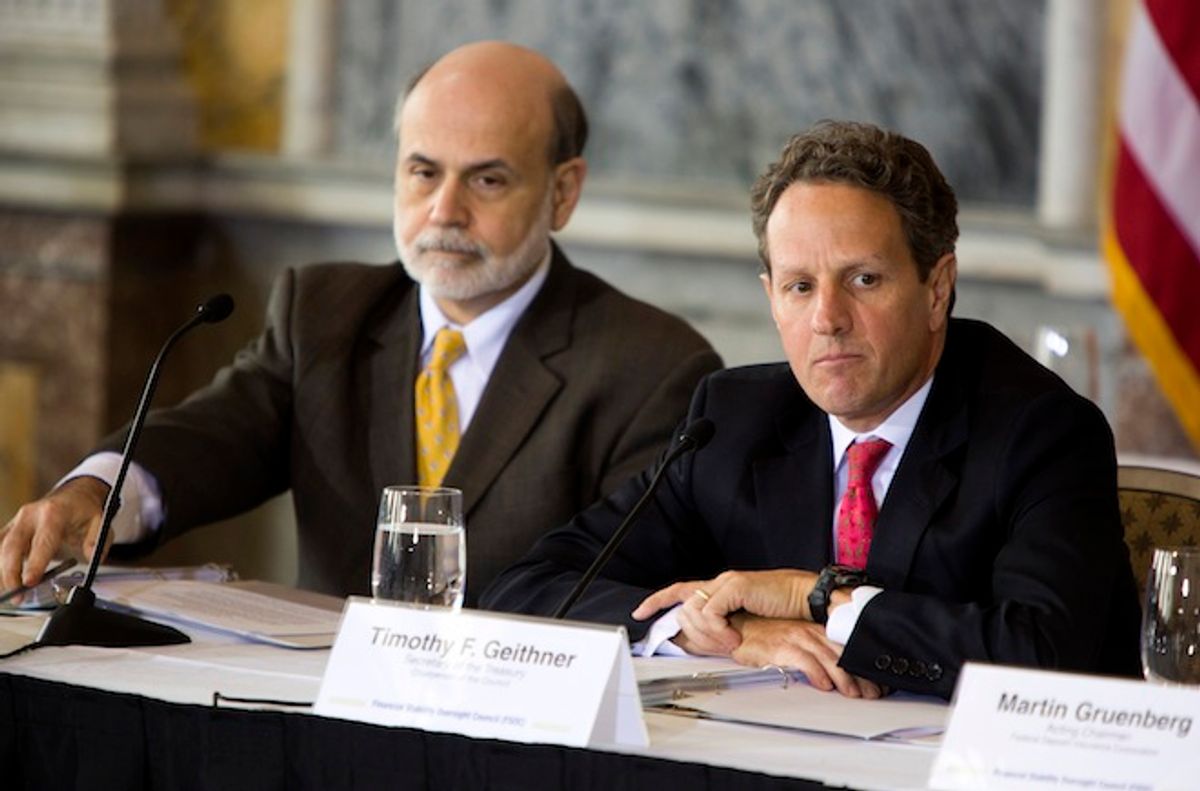 If rigging the world’s most important interest rates does not make you mad, just wait. The Libor scandal, which became public with Barclays Bank in London, is now spattering mud on at least three of America’s financial supermarkets – Bank of America, Citigroup and Jamie Dimon’s JPMorgan Chase – as well as on several European and other banks that have a major presence on Wall Street. Financial journalists are also digging into whether the Federal Reserve played cops or robbers in the affair, or more likely a bit of both.

Today, members of the Senate Banking Committee will ask Fed Chairman Ben Bernanke about the rigging and efforts to regulate it, and later this month they will put similar questions to Treasury Secretary Timothy Geithner. Before joining the Obama administration, Geithner served as president of the New York Federal Reserve and is now getting credit for knowing of the rigging as early as 2007 and trying to curb it in 2008, about the time Bear Stearns went to the wall. The oversight panel of the House Financial Services Committee is asking the two officials similar questions, as both try to reassure lawmakers and investors that they have the situation under control. They don’t, and it’s not all their fault. Too many nasty secrets have come out and too many cities, states, corporations, hedge funds and individuals will go to court around the world to try to recoup their losses, introducing enormous uncertainties. Though we are still in the early days of the public scandal, the rigging could well turn out to be what analyst Robert J. Shapiro  calls “the biggest financial fraud in history,” and the repercussions could in time prove even more toxic than the subprime mortgage crisis of 2007-08.

No one knows the true value of U.S. dollar- and British pound-denominated variable rate loans, mortgages, credit cards, credit default swaps and other derivatives that use the London interbank offered rate (Libor) to calculate their interest rates. Reputable media have published a wild range of estimates, while the generally authoritative Forbes and Wall Street Journal put the number as high as $800 trillion. Many more trillions in euro-priced instruments rely on a similar benchmark called Euribor, which the world’s leading banks – including Barclays, Citigroup and JPMorgan Chase – also appear to have gamed for their own profit. By comparison, the U.S. national debt is under $16 trillion.

Both Libor and Euribor depend on selected banks to give daily estimates of what they think they would have to pay for short-term interbank loans. The Barclays bankers initially inflated their estimates to earn more money on their loans, and then with the bankruptcy of Lehman Brothers and crash of the global financial system, lowered their estimates to make their banks seem a better credit risk than they were and to allow them to borrow money more cheaply. As now released emails from Barclay’s show, traders at the bank easily breached the so-called Chinese firewall between divisions to learn the true market rates and used the gap between them and Libor to make huge profits by shorting their bank's stock or gambling on credit default swaps and other derivatives. Most of these Libor-based derivatives never traded on regulated exchanges with legally required transparency, making it difficult to know how many trillions of dollars’ worth have now become toxic. Hungry lawyers will seek to find out, while state and federal prosecutors, the Commodity Futures Trading Commission, the FBI and Scotland Yard try to figure out whether to press criminal charges for fraud and insider trading. If, as Forbes suggests, the banks actually colluded with each other to set the daily Libor, prosecutions would become more likely.

Markets will suffer from the size of the “cesspit,” as the Bank of England’s Paul Taylor called it, how long it percolates and how the spillover affects the solvency of the world’s leading financial institutions. Barclays has already agreed to pay $453 million in fines to U.S. and U.K. authorities, and three of its top officials are stepping down, including high-powered American CEO Bob Diamond. As savvy analysts are asking, will the other banks under investigation pay even heftier fines because Barclay’s was the first to cooperate with investigators? Will top execs also have to step down? And, I would add, what will all this do to the financial services industry and its ability to do what it’s supposed to do, which is to lend money to non-financial enterprises to produce real products that people need and want?

The scandal also raises troubling questions about what we have allowed to pass for regulation. The Federal Reserve is already boasting of how it learned of the rigging back in 2007 and instigated the investigation in 2008, which it did. But, as far as we now know, the Fed never told Barclays or any other bank on Wall Street to stop fudging its estimates. The reason is obvious. As the Wall Street Journal sagely observed, “We'd be surprised if any central bank officials in the U.S. or the U.K. weren't privately encouraging lower rates during the crisis. They were already doing so publicly. Since the monetary authorities were attempting to manipulate interest rates of all kinds lower during the crisis, why would Libor be an exception?”

Worse, during the crisis, the Fed rewarded Barclays and the other banks involved with setting Libor rates by lending them hundreds of billions of dollars at knocked-down interest rates and without forcing them to change their behavior. The Fed and other regulators on both sides of the Atlantic also continued to allow Libor and Euribor to rely on what the bankers chose to tell them rather than on objective and transparent indicators. This may be about to change, as suggested by the settlement between Barclays and the Commodity Futures Trading Commission. But the badly misplaced trust in bankers seems inevitable as long as Jamie Dimon and other financial moguls sit on the boards of the Fed’s regional banks, a congressionally mandated indulgence that goes back to the original J. Pierpont Morgan and sorely needs to be eliminated.

Those who write the laws and regulations – like the senators and House members who will question Bernanke and Geithner – share in the blame. They have simply caved in to the bankers by allowing the derivative trade to operate in the dark where it continues to threaten the global economy with what Warren Buffet called “financial weapons of mass destruction.” But the real question is why civilized societies allow such instruments to be traded at all. Credit default swaps and other derivatives, ostensibly designed to help manage risk, have introduced overwhelming systemic risk, which we are fools for continuing to tolerate. Like other mythically free markets, those who trade in dangerous derivatives rely on courts to enforce their contracts. Without that enforcement, who would buy or sell their arcane offerings?

So, the next time the banks need taxpayer money, if not before, the solution is obvious: Use the leverage to criminalize the dangerous parts of the derivative trade or at least put them beyond the protection of our legal systems, as we do with contracts to sell atomic bombs, human beings or body parts. It’s just a modest proposal, but one that the United States and other major countries should begin to consider.