An inside look at the former president's dirt and doodles 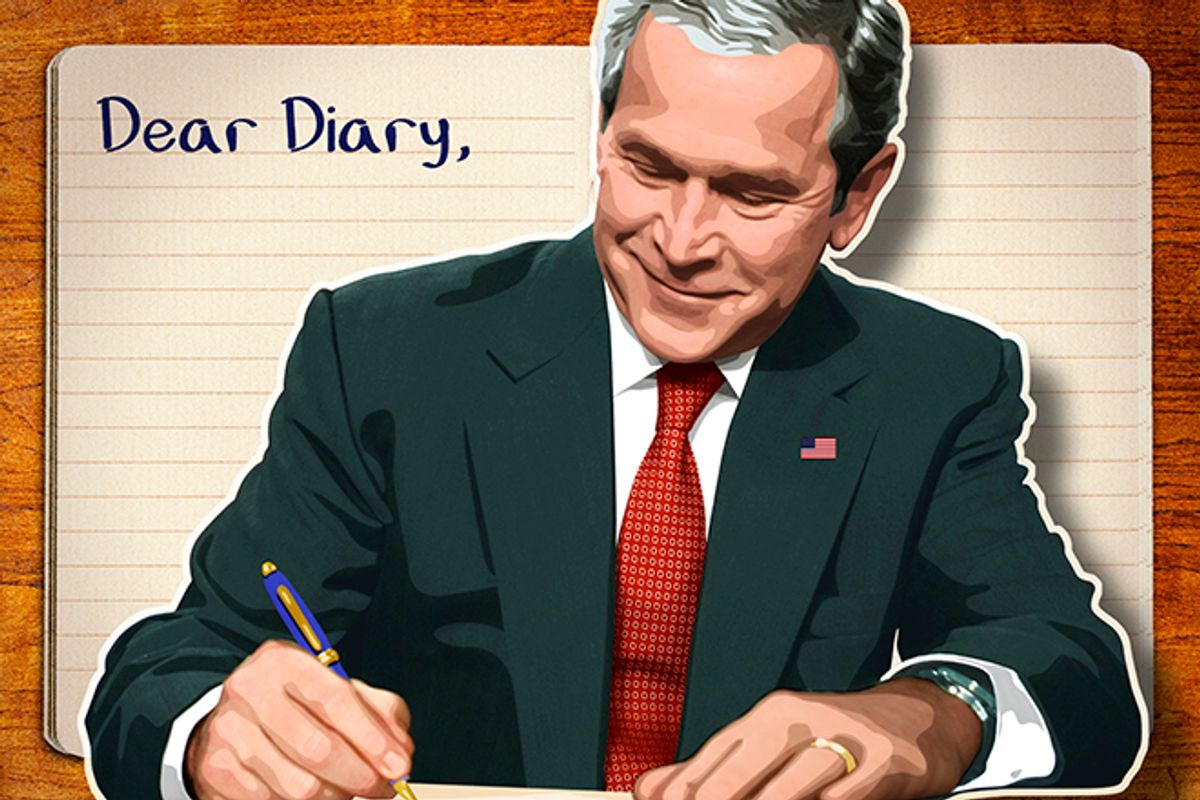 The White House diary of George W. Bush, which the 43rd president faithfully maintained throughout his two terms in office, has created a media firestorm and stirred both controversy and intrigue since it was published by the New York Times on its Web site early yesterday morning. The diary has already received more than 35 million hits.

Critics of the former president are pointing to the diary as evidence that Mr. Bush was a detached and disinterested commander-in-chief who was out of his depth as president. “At one of the most important moments of his presidency, all the guy was thinking about was food,” said longtime democratic strategist Bob Shrum, in reference to what has quickly become the most widely discussed section of the diary: a fourteen-page entry written on the eve of the Iraq War in which the president vents about the quality of the White House food, specifically the poor selection of comfort snacks, his dissatisfaction with the chimichangas and his ongoing frustration with the size of the hamburgers.

“If a chimichanga isn’t deep fried then it’s JUST A BURRITO!” wrote the frustrated president. “I spent most of last week down in the kitchen showing Roland how to do it, but he still doesn’t get it,” the president fumed, in an apparent reference to former White House Chef Roland Mesnier. Mr. Bush also complained about the quality of the White House snacks, dismissing them altogether as “wussy granola things.” He went on to list his “300 all-time favorite snax,” which included barbecue Boogie Woogies, mashed up Funyons mixed with Cheeze-Itz and Goobers dipped in tartar sauce. But the president seemed particularly distressed when writing about the size of the White House hamburgers. “A hamburger the size of my palm ain’t a real hamburger,” complained the president, “It’s a breakfast patty!!!” On the following pages he scrawled ‘WHERE’S THE BEEF?” over 300 times.

Many of the entries are difficult to interpret because of their brevity. On the night of March 22, 2001, for example, Mr. Bush simply wrote the word “stuff” and surrounded it with happy-faced questions marks. And in an entry dated November 17 of 2002, the president wrote, “Those things over there are weird,” but declined to elaborate. On Christmas Eve of the following year, the president simply wrote, “Fat dude from Gilligan’s Island.”

The president also describes occasional disagreements with his advisors. On June 22nd, 2007, Mr. Bush wrote of his frustration with Secretary of Defense Donald Rumsfeld who, during an emergency meeting in the Situation Room, disagreed with Mr. Bush’s assertion that Ikea, the popular ready-to-assemble furniture store, was a country in Australia. On another occasion, Mr. Bush writes that Condoleeza Rice talked him out of creating a national holiday to honor Cody Abramson, the inventor of the Slip-'n-Slide.

Mr. Bush writes about his successor on only one occasion, in August of 2008, when then-candidate Barack Obama was running for president. “Yobama reminds me of that dude from that one movie about that other dude with that thing.”

A spokesman for President Bush declined to comment for this article.