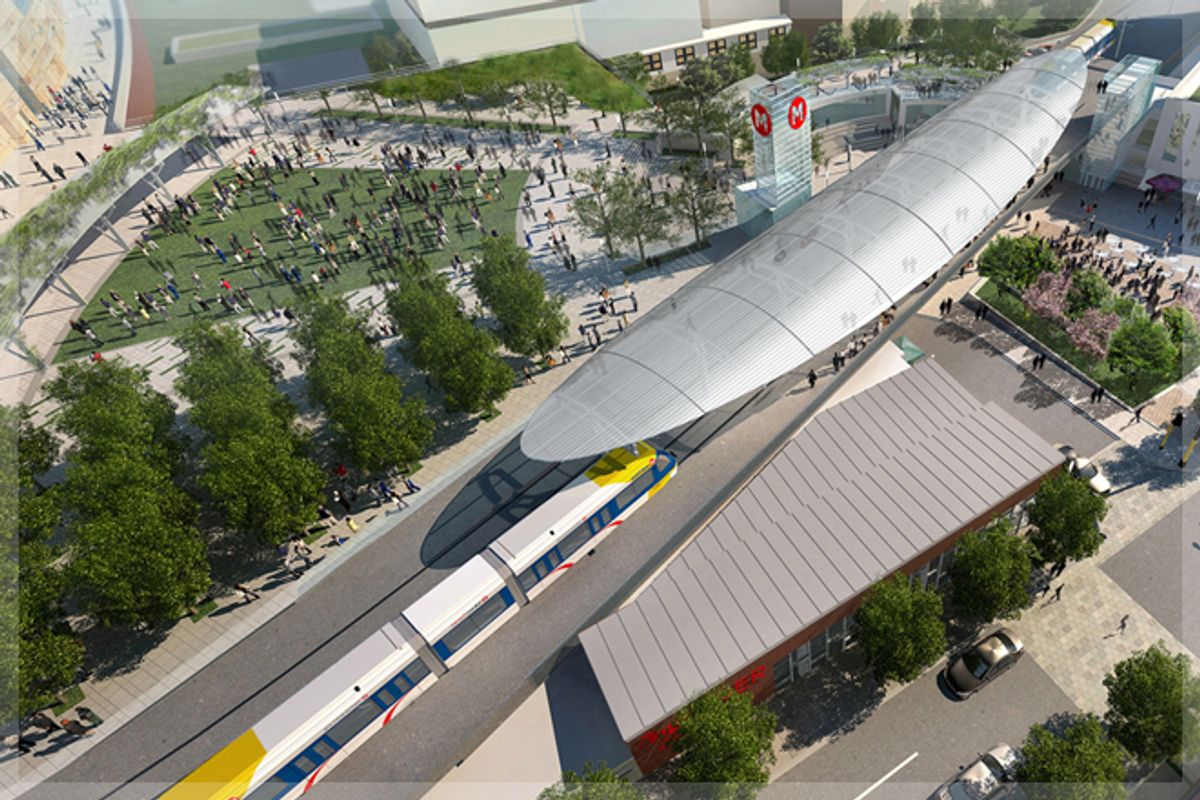 Minneapolis' Great Northern Depot was never as boastful as its palatial East Coast cousins, but its well-appointed, spartan, Midwestern reserve was gorgeous nonetheless. Sterling white walls overlooked long, dark benches, and an enormous naturalist painting depicting pre-fur trader Minnesota hung over the ticket counter. But like much of the city (40 percent of downtown Minneapolis was leveled for urban renewal), the Beaux-Arts train station found itself on the business end of a wrecking ball in 1978.

On Monday, 99 years after the Depot welcomed its first locomotive, history came full circle as the city broke ground on what's being called "an open-air version of New York's Grand Central." That's a slight exaggeration, but in some ways the new hub, called the Interchange, more accurately reflects today's urban ideals than those monumental terminals of the railroading era. "Minnesotans do describe this as their Grand Central," says Peter Cavaluzzi, principal at EE&K, which designed the complex. "But the difference is that this really functions in the new wave of transit hubs where we're trying to blend transit and culture."

Imagine talking to Pete Campbell as he's schlepping home on the 6:45 to Cos Cob about blending transit and culture. But that's what's been happening over the past several years. For better or worse, transit is coming to be seen as one more urban consumption option, a lifestyle choice almost as defining as buying a car was 60 years ago. Ridership is soaring, going car-less is cause for bragging rights, and people are clamoring for transit options that suit their aesthetics and values, from streetcars to bike shares. And the new transit hubs are striving to reflect this. "In the old days you had the station house, an iconic edifice associated mainly with transportation," says Cavaluzzi. "Now the definition of the station is being broadened to make it a larger 'transit environment.'"

What is a "transit environment"? First off, it's not just trains. It's heavy rail, light rail, buses, streetcars, subways, bicycles, pedestrians, all integrated into a single multi-modal hub. Second, it's an activated space, with shops and restaurants (not just kiosks and food courts, but stores and restaurants you'd want to hang out in), live performances, art, parks -- a true public gathering space. Finally, it's integrated into the city, less a soaring monument to transportation than a celebration of urban life -- and in the more ambitious efforts, a small city in itself.

In addition to bars and restaurants, the Minneapolis Interchange will make room for a hotel, an office building, and an outdoor promenade of stores and places to sit. A live performance amphitheater will be located so that the station's light-rail trains glide behind it, and a grand staircase will lead up to the "great lawn," an elevated green space for relaxing while you wait for your ride. The complex is connected to the Minnesota Twins' Target Field, and right now, "the area all around there is concrete jungle," says Cavaluzzi. The Interchange hopes to create a streetscape that will transform it into a place to be.

But whether a transit hub can turn a concrete jungle into a vibrant scene is largely untested. Older train stations like Grand Central in Manhattan and Union Station in Washington have been retrofitted with retail and restaurants, with some success. But these venues have built-in foot traffic to the tune of hundreds of thousands of commuters per day. The Interchange -- which may see most of its activity during rush hours and game days -- will attempt a difficult trick: making a non-historic, peripheral transit hub a destination in its own right.

Whether it will work remains to be seen. But perhaps the bigger question is: Are these spaces good for public transportation? When funding for transit is scarce (read: always), glamorous digs are a luxury. The $80 million Interchange will be mostly publicly financed, and may be worth the dough if it lures more riders and generates revenue for the system. But that's not guaranteed. One of the problems with looking at transit as a sexy lifestyle amenity is that things like prettier stations can come at the expense of providing the best possible ways to get from one place to another.

The most flagrant example is the plan to expand New York's Penn Station into the Farley Post Office. The project will cost upward of $1 billion -- and not increase rail capacity by a single track. Yes, it'll add some elbow room and make entering Penn Station a more elegant experience, but it does nothing to give more trains to a city that desperately needs them. It's "an example of how the whole transportation planning system has broken down," said former Amtrak president David Gunn. "It was controlled by a bunch of rich developers." Further downtown, renowned Spanish architect Santiago Calatrava is designing the transit hub for the new World Trade Center, a majestic steel sculpture that will cost $3.4 billion. A block east of that, the $1.4 billion Fulton Street Transit Center will essentially be an expensive mall and subway station rolled into one. Many of these projects do improve infrastructure -- that's always the primary rationalization -- but the bells and whistles push the prices to astronomical levels.

So, what, then? No more Great Northern Depots? Just dingy, no-frills terminals for the foreseeable future? Not at all. A spectacular transit hub, even an expensive one, can be well worth the cost. Perhaps the most audacious such project in the country right now is the San Francisco Transbay Terminal, a massive $4.2 billion development that seeks to shift its city's entire center of gravity. Even with that price tag, there's a lot to love, says Egon Terplan, regional planning director for the San Francisco Planning + Urban Research Association (SPUR). "It will be an incredible destination."

"The city made a strategic decision in the '80s to shift future growth south, in part to preserve historic neighborhoods in the north and east," says Terplan. Transbay will help fulfill that goal. Like the Interchange, it's being called a Grand Central for the West, and again, that's not really accurate. "It's not just a building," says Terplan. "It's being developed in such a way that its benefits accrue to the broader environment." Forty acres immediately surrounding the site are being rezoned to create a Transbay District of residential and commercial development, including the city's tallest skyscraper. On adjacent Folsom Street, sidewalks will be widened to create more space for pedestrians and outdoor cafes. And atop the station itself will be a quarter-mile-long, five-and-a-half acre park of lush vegetation, lily ponds,  tall trees and an outdoor concert venue, accessible by escalators from inside the terminal. (It'll also help keep the building cool on hot summer days.)

Moreover, not all of the money for the terminal will come out of funds reserved for transit. $1.4 billion will be paid for through tax increment financing, which means that as the land around it becomes more valuable (as land around transit hubs almost always does), the increased taxes from those surrounding properties will go toward paying down the debt that built it. When all is said and done, Transbay will have given San Francisco 2,600 new homes (35 percent of them affordable), 10,000 daily new transit trips, and a whole new neighborhood that the entire city can use.

The differences between this and the Penn Station proposal couldn't be clearer. Whereas the new Penn Station will offer only cosmetic upgrades for the people who use it, the Transbay Terminal will have real, tangible, wide-ranging impacts. As for actual transit usage (lest we forget, that's what a transit hub is for) Transbay accomplishes so much more. Like the Interchange, it will consolidate most of the city's major transit under one roof: commuter rail, buses, BART and Muni connections, and someday (God willing) high-speed rail. And as transportation blogger Yonah Freemark has pointed out, it does something you hardly ever see: it gives buses a little respect, with elevated approaches and an upper-level terminal enclosed in glass. "People waiting on buses will literally be standing above the city streets" -- and above the trains -- "facing windowed panels," writes Freemark, a subtle nod to a changing attitude toward different modes of travel.

Changing attitudes are the reason transit ridership is booming, and it's true that physical form can show where a society's priorities lay. "In an era where we're cutting funding from the public realm, making the most public experience of all -- transit -- be something that's joyous and celebratory is an important statement in and of itself," says Terplan. True joy, however, can simply be getting where you're going, regardless of what Points A and B look like.