Pain and bondage in the American workplace 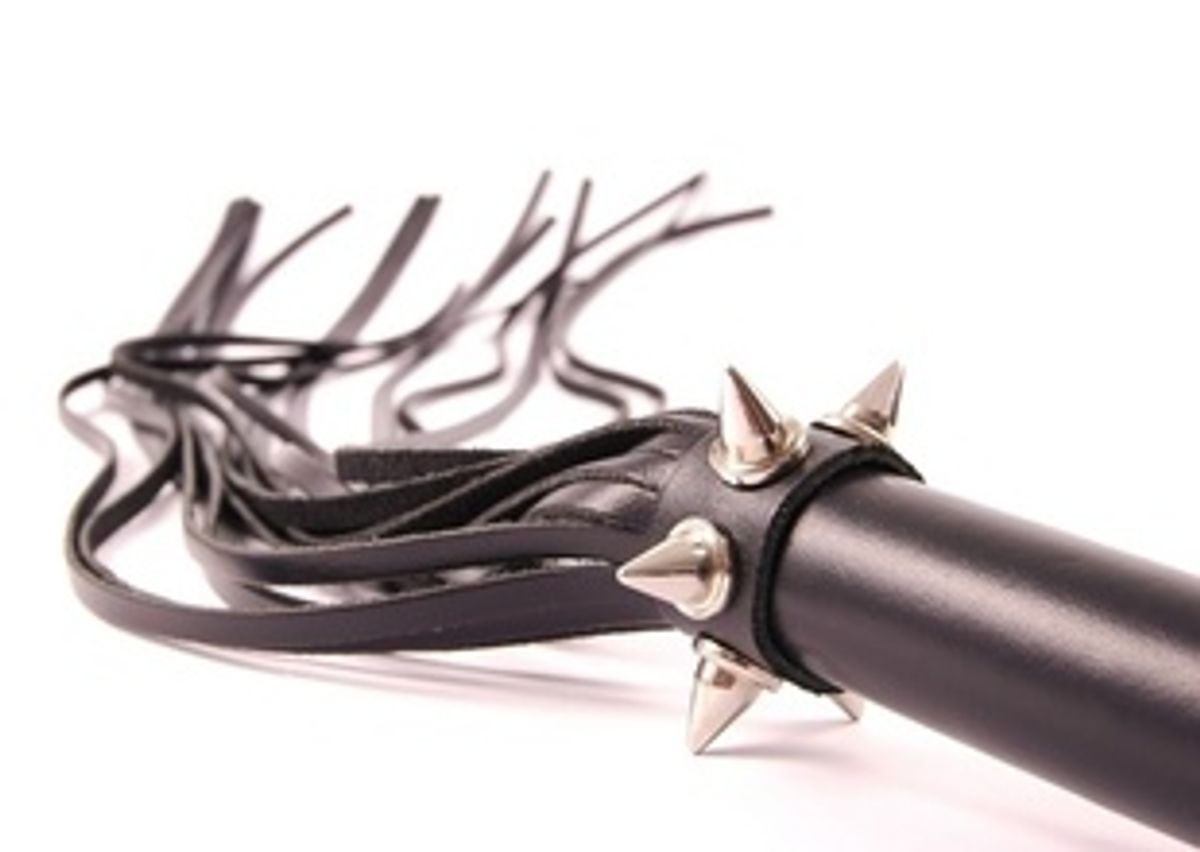 Rand, whose own novels bristle with sadomasochist sexy-time and praise for the male hero’s pursuit of domination, would instantly approve of Christian Grey, the handsome young billionaire CEO who bends the universe to his will.

Ingénue Anastasia Steele stumbles into his world -- literally -- when she trips into his sleek Seattle office for an interview for the college paper. When she calls him a “control freak,” the god-like tycoon purrs as if he has received a compliment.

“’Oh, I exercise control in all things, Miss Steele,’ he says without a trace of humor in his smile. ‘I employ over forty thousand people…That gives me a certain responsibility – power, if you will.’”

She will. Quivering with trepidation, Anastasia signs a contract to become Christian’s submissive sex partner. Reeled in by his fantastic wealth, panty-sopping charm, and less-than-convincing promise that the exchange will be to her ultimate benefit, she surrenders herself to his arbitrary rules on what to eat, what to wear, and above all, how to please him sexually. Which frequently involves getting handcuffed and spanked. “Discipline,” as Christian likes to say.

Quoting industrial tycoon Andrew Carnegie, Christian justifies his proclivities like an acolyte of Randian Superman ideology: “A man who acquires the ability to take possession of his own mind may take possession of anything else to which he is justly entitled.” (Rand’s worship of the Superman obliged to nothing but his intellect is well-known and imbued with dark passions; she once expressed her admiration for a child murderer’s credo, "What is good for me is right," as "the best and strongest expression of a real man's psychology I have heard” in a 1928 diary.)

Christian Grey, our kinky CEO, started his literary life as a vampire when Erika Leonard, the woman behind the pseudonym “E.L. James,” published the first version of her novel episodically on a Twilight fan site, basing the story on the relationship between Stephenie Meyers’ love couple Edward Cullen and Bella Swan. It was later reworked and released in its current form. Gone was Edward the vampire, replaced by Christian the corporate slave-master.

Drunk on the intoxicants of wealth and power, Fifty Shades of Grey hints at a sinister cultural shift that is unfolding in its pages before our eyes. The innocent Anastasias will no longer merely have their lifeblood slowly drained by capitalist predators. They’re going to be whipped, humiliated and forced to wear a butt-plug. The vampire in the night has given way to the dominating overlord of a hierarchical, sadomasochistic world in which everybody without money is a helpless submissive.

This has been coming for some time. Ever since the Reagan era, from the factory to the office tower, the American workplace has been morphing for many into a tightly-managed torture chamber of exploitation and domination. Bosses strut about making stupid commands. Employees trapped by ridiculous bureaucratic procedures censor themselves for fear of getting a pink slip. Inefficiencies are everywhere. Bad management and draconian policies prop up the system of command and control where the boss is God and the workers are so many expendable units in the great capitalist machine. The iron handmaidens of high unemployment and economic inequality keep the show going.

How did this happen? Economists known as “free-market fundamentalists” who claim Adam Smith as their forefather like to paint a picture of the economy as a voluntary system magically guided by an “invisible hand” toward outcomes that are good for most people. They tell us that our economy is a system of equal exchanges between workers and employers in which everybody who does her part is respected and comes out ahead.

Much of the evil stems from the fact that free-market economists who still dominate the Ivy League and the policy circles have focused on markets at the expense of those inconvenient encumbrances known as "people." Their fancy mathematical models make calculations about buying and selling, but they tend to leave out one important thing: production. In other words, they don't give a hoot about the labor of those who sustain the economy. Their perverted religion may have something to say about unemployment or wages – keeping the former high and the latter low -- but the conditions workers face receive nary a footnote.

Michael Perelman, one of a small group of heretical economists that questions this anti-human regime, draws attention to the neglect, abuse and domination of workers in his aptly named book, The Invisible Handcuffs: How Market Tyranny Stifles the Economy by Stunting Workers. He reveals that instead of a system of fair exchanges, we have “one in which the interests of employees and employers are sharply at odds.” This creates conditions of festering conflict and employers who have to take ever-stronger measures to exert control. Hostility among workers thrives, which results in more punishment. Respect, the free flow of information, inclusive decision-making – all the things that would make for a productive work environment -- fly out the window. The word of the manager is the law, and endless time and energy is expended rationalizing its essential goodness.

Americans are supposed to be people who love freedom above everything else. But where is the citizen less free than in the typical workplace? Workers aredenied bathroom breaks. They cannot leave to care for a sick child. Downtime and vacations are a joke. Some – just ask who picked your tomatoes – have been reduced to slave-like conditions. In the current climate of more than three years of unemployment over 8 percent, the longest stretch since the Great Depression, the worker has little choice but to submit. And pretend to like it.

A medieval peasant had plenty of things to worry about, but the year-round control of daily life was not one of them.  Perelman points out that in pre-capitalist societies, people toiled relatively few hours over the course of a year compared to what Americans work now. They labored like dogs during the harvest, but there was ample free time during the off-seasons. Holidays were abundant – as many as 200 per year. It was Karl Marx, in his Theory of Alienation, who saw that modern industrial production under capitalist conditions would rob workers of control of their lives as they lost control of their work. Unlike the blacksmith or the shoemaker who owned his shop, decided on his own working conditions, shaped his product, and had a say in how his goods were bartered or sold, the modern worker would have little autonomy. His relationships with the people at work would become impersonal and hollow.

Clearly, the technological wonders of our capitalist system have not released human beings from the burden of work. They have brought us more work. They have not brought most of us more freedom, but less.

Naked domination was not always the law of the land. In the early 1960s, when unions were stronger and the New Deal’s commitment to full employment still meant something, a worker subjected to abuse could bargain with his employer or simply walk. Not so today. The high unemployment sustained by the Federal Reserve’s corporate-focused obsession with “fighting inflation” (code for "keeping down wages") works out well for the sado-capitalist. The unrelenting attack on government blocks large-scale public works programs that might rebalance the scale by putting people back on the job. The assault on collective bargaining robs the worker of any recourse to unfair conditions. Meanwhile, the tsunami of money in politics drowns the democratic system of rule by the people. And the redistribution of wealth toward the top ensures that most of us are scrapping too hard for our daily bread to fight for anything better. The corporate media cheer.

In the early '70s, the S&M counterculture scene followed the rise of anti-authoritarian punk rock, providing a form of transgressive release for people enduring too much control in their daily lives. Bondage-influenced images hit the mainstream in 1980 -- the year the union-busting Ronald Reagan was elected president -- in the form of a workplace comedy, 9 to 5, which became one of the highest grossing comedies of all time. 9 to 5 struck a chord with millions of Americans toiling in dead-end jobs ruled by authoritarian bosses. Audiences howled with joy to see three working women act out their fantasies of revenge on a workplace tyrant by suspending him in chains and shutting his mouth with a ball-gag.

More recently, the 2011 film Horrible Bosses follows the plot of three friends who decide to murder their respective domineering, abusive bosses. The film exceeded financial expectations, raking in over $28 million in the first three days. It went on to become the highest grossing black comedy film of all time.

The fantasy of turning the tables on the boss speaks to the deep-seated outrage that trickle-down policies and the war on workers has wrought. People naturally want to work in a rational, healthy system that offers them dignity and a chance to increase their standard of living and develop their potential. When this doesn’t happen, the social and economic losses are profound. Today’s workers are caught in Perelman’s “invisible handcuffs” – both trapped and blinded by the extent to which capitalism restricts their lives.

The market has become a monster, demanding that we fit its constraints. As long as we ignore this, the strength of the U.S. economy will continue to erode. Freedom and equality, those cornerstones of democracy, will diminish. For now, many working people have unconsciously accepted the conditions that exist as somehow natural, unaware of how the machine is constructed and manipulated to favor elites. Fear and frustration can even make us crave authority. We collaborate in our own oppression.

Does the submissive consent to:

Yes! She consents. The hypnotic consumption Christian offers in a world replete with fancy dinners and helicopter rides – goodies that will be revoked if she fails to obey -- overturns her natural desire for free will. Once Anastasia has signed on the dotted line, her master rewards her with a telling gift that is often the first “present” an office employee receives: “I need to be able to contact you at all times…I figured you needed a BlackBerry.”

Her first note to him on her new gadget asks a question: “Why do you do this?”

“I do this,” Christian answers, “because I can.”

Until we can link ourselves together to change this oppressive system, the Christian Greys will remain fully in control.