How to talk about art 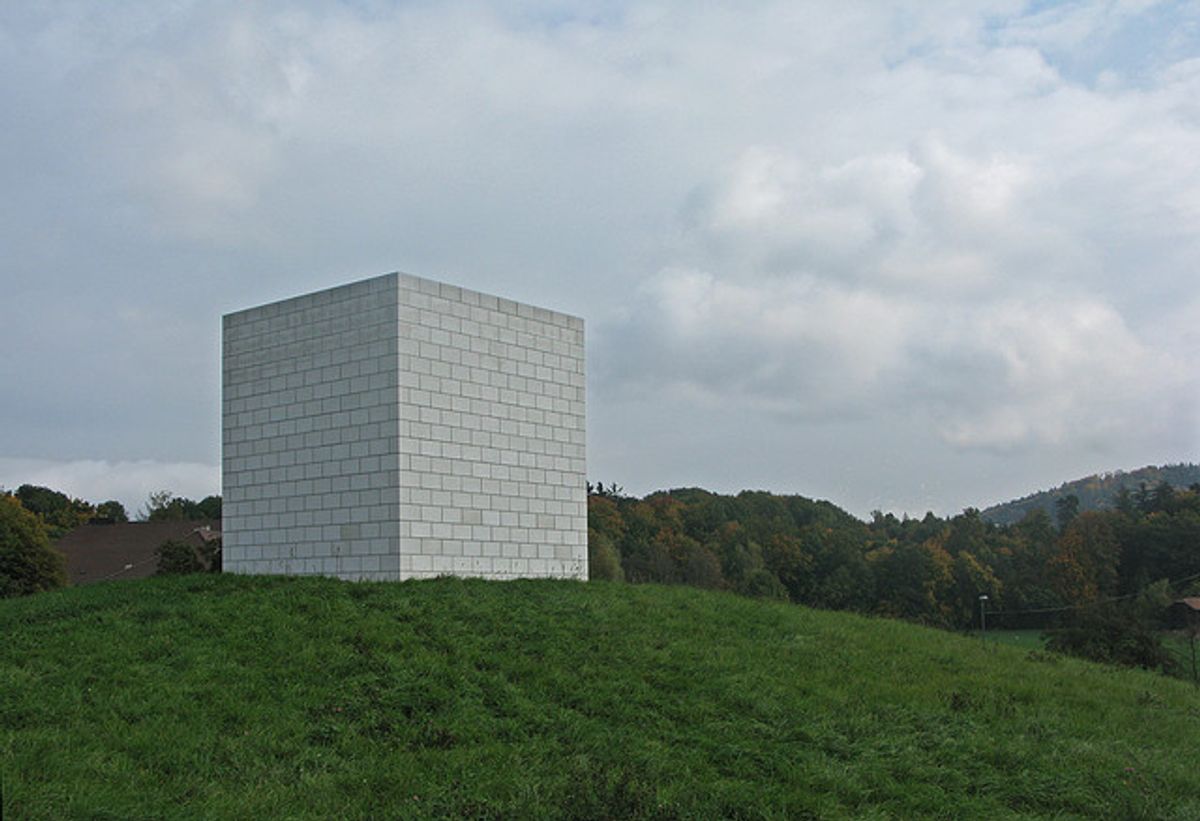 A sculpture by Sol LeWitt in the gardens of the Paul Klee Center in Berne, Switzerland. (flickr.com/maxbucher)
--

With longtime champion of the most boring cerebral art in the world, the Dia Foundation, finalizing plans to move back to Chelsea, it’s time to put on our thinking caps and learn how to talk about conceptual art.

Chill. You were going to have to anyway. Even though Dia doesn’t turn the lights on in Chelsea until 2017 or so, Sol LeWitt is everywhere this summer, with shows at Museum Leuven in Belgium (Sol LeWitt: Colors, June 21–Oct. 14),  and at the Centre Pompidou Metz in France (Sol LeWitt: Wall Drawings from 1968–2007, through July 29, 2013) and some of my favorite LeWitts are at Mass MOCA (Sol LeWitt: A Wall Retrospective, through 2033). Also, a public garden project by LeWitt, “Lines in Four Directions in Flowers” can be seen at the Philadelphia Museum of Art’s William M. Reilly Memorial in Fairmount Park, and then there’s the second life of Op Art and Bridget Riley getting set to accept the City of Siegen’s 12th Rubens Prize.

So, don’t be caught with your pants down in front of some inexplicable wall full of squiggles: Not only will you get arrested (umm…maybe) but you’ll look like a schmuck.

Some works by Walter de Maria at one of the high temples of Conceptual Art, Dia:Beacon (viaflickr.com/yusunkwon)

When stumped, I suggest you say that the artist “has created a very interesting visual lexicon.”Nearly anything qualifies for that phrase; because, if it is repeated often enough — throughout a canvas, a show, a period or a career — it can be described as the artist’s visual language, his lexicon.

Your very best art speakers love to use this word and it’s easy to see why. Contemporary art is full of repetition so we can even talk about one artist tapping into or appropriating another’s lexicon. It all sounds so noir and romantic that you’d never know you were chatting about pure white canvasses and steel boxes. What’s more, lexicons can be built out of anything: memes of every sort, forms, formats and formulas, icons and symbols, traditions, ideas and techniques. So even collage artists can come off sounding like they have something new to say!

With “lexicon” in our tool chest, we’re ready to start speaking about Sol LeWitt, whose works on paper are being shown at the Waterhouse & Dodd gallery in SoHo right now.

LeWitt created a visual lexicon of lines and geometries and a conceptual lexicon of collaborative and/or self-realizing forms. Because LeWitt’s paintings are issued in the form of instructions for others to use, his works are said to replace representational and narrative imagery with concept. His works stress the ideas involved in the making of them and not the objects themselves (nor, indeed, any signified object at all).

Say what it’s ABOUT

LeWitt’s paintings are clearly about making since they raise issues as to who the author is: anyone can make a Sol LeWitt painting. It might suck, mind you, but it’s still a LeWitt if it follows the instructions.

LeWitt’s conceptual approach is one of collaboration and is all about erasing, not only art as object, but also the author himself. Because of this radical turn, one can say that he is seen as one of the most important artists in the conceptual art movement.

In fact, one should say that. You can usually get away with making a claims about who is “seen as” “one of” the most “important” anything — since these qualified phrases exempt you from having stated any facts. When a speaker says that X is seen as one of the most pivotal yadda, they actually mean to say something like, “Woohoo! I love this artist!”

However, in the case of Sol LeWitt, you can genuinely see that he paved the way for a whole new way of talking about art in terms of the concepts called up by viewing and or making it.

In fact, LeWitt’s new lexicon opened floodgates to a vast realm, a Pandora’s Box, one might say, of artworks that needn’t even be realized in order to be appreciated, and even bought and sold.

Nothing says art quite the same way as how it abuts a fire alarm. Here a Sol LeWitt wall drawing confronts fire regulations at MASS MoCA. (viaflickr.com/daniellemkuehnel)

[Clears throat] I learned a lot about artspeak from the Dia. I cut my conceptual teeth in their cool warehouse atmosphere, where, from 1991 to 2004, they provided tri-fold pamphlets in serious type with three neat punch holes for your crucial binder (ye olde iPhone notepade app). These held intricate, meandering lectures explaining the mysteries of Brice Marden, Donald Judd and Joseph Beuys.

The Dia made it its business to create a place for challenging, heavily conceptual art, and then to made damned sure we understood it. Then curator Lynne Cooke’s winding prose introducing each artist’s show became doctrine. Doubt me? Here’s a little exercise: google any minimalist artist who had a show at Dia, write down keywords and phrases, then visit the Dia Center’s past shows to find the same phrases and keywords written, as it were, in what may well be the original stone tablets. That’s recent art history, you scholar you! Of course she picked up all her fine phrases in college, where the meaning of all things abstract is forged in the smithy of academia, but hell, every Moses needs a burning bush. (Are you giggling in the back? Shh!)

“Bridget Riley is one of the most distinctive artists of the twentieth and twenty-first centuries” — that’s why she’s being honored with the Rubens Prize and that’s why, back in the day, Dia gave her a show and said that her works were “embodying an existential philosophy of placelessness generated, paradoxically, by site-specificity … ” er, and that’s also why we’re getting a dizzying eyeful of NEW Op Art these days.

Back in the olden days, Op Art was a short-lived movement that made outsize conceptual claims. There you were, standing in front of this vertiginal painting thinking that it was cool that if you crossed your eyes and refocused somewhere beyond the canvas, the whole bit moved forward and came to life.

And then you remembered you were at the Dia. Stop having fun and settle down, kids — “this lexicon, with its implicit scaffolding, offers a point of departure for a work based on movement through spaces, conceptual as well as pictorial and actual in character.”

Here’s a tip: Try using “space” no matter what you’re talking about; nearly any work of art can be about space. And when it’s about space, it’s about you in space, the object and you in space, the space the object occupies, the space it is relative to; it’s about your perception of its space and the impact its space has on you and the surrounding environment. Space is one of the easiest words to free associate with, and free-association is the easiest way to talk about art without controversy. That’s why it’s used so much.

Imagine, btw, the dismay of this conceptual painter with her existentialist bent, when designers lifted her compositions to decorate minidresses, because, honestly, they were just plain groovy. Ha! The philistines! Don’t they know conceptual art when they see it?