According to Rush, the unemployed would go back to work if their unemployment benefits weren't so posh 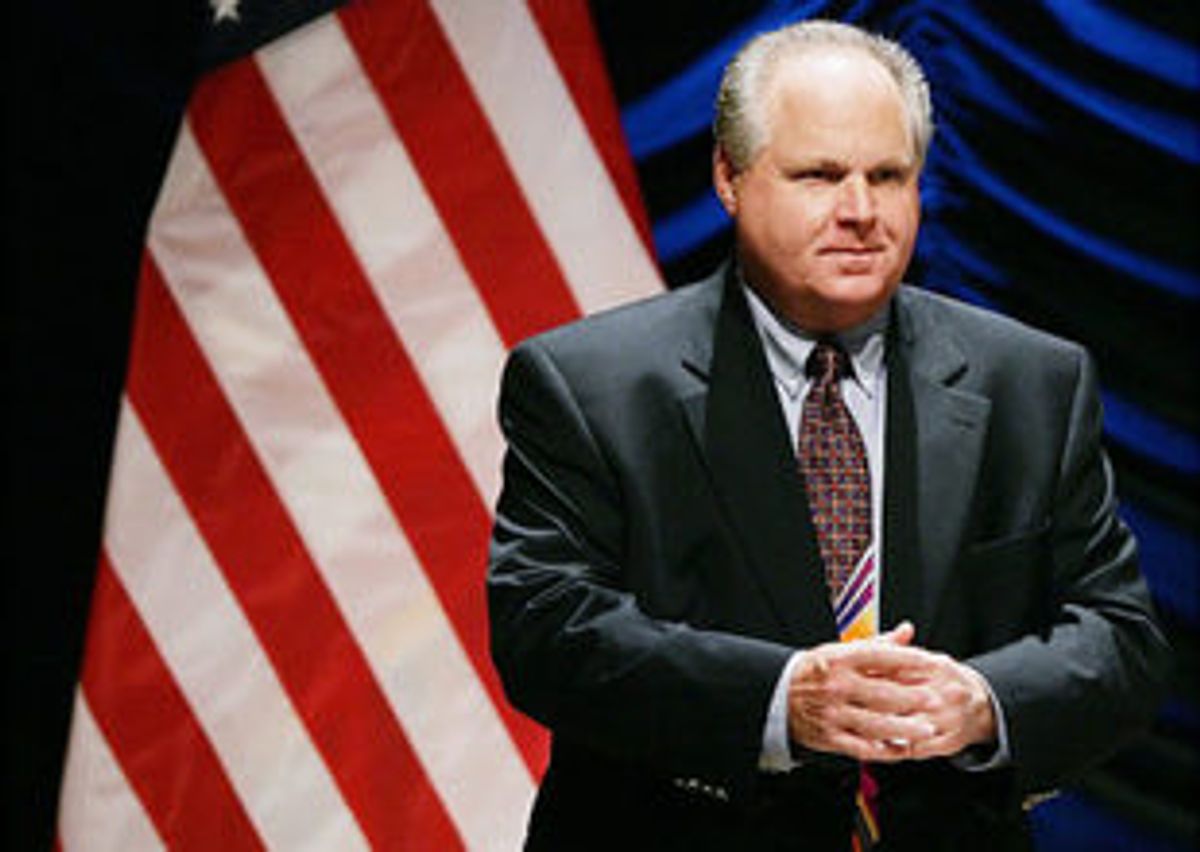 When official unemployment's been over 8 percent for over three years, it can be hard to keep focused on the crisis. The endless repetition of jobs statistics can become numbing. But the people struggling every day with the realities of joblessness don't need the reminder. They're living the crisis, day in and day out.

So imagine how they felt when Rush Limbaugh, self-proclaimed patron saint of the everyday Joe who's being kept down by the Man (never mind that in his case the Man is represented by liberals who might want to, you know, create jobs or raise the minimum wage) declared this week:

“The sad truth is that employment is not pivotal...No job, no employment, no pain. For a whole heck of a lot of people whose expectations for themselves are not very high....There are no jobs, and yet they're still eating. I'm telling you, there's a new reality out there....Because it's not resulting in that much pain, not nearly as much as it used to....The so-called victims of the unemployment circumstance are not suffering as unemployed people in the past did.”

We are supposed to be cheered, I suppose, that Limbaugh says, “Not that I want them to!” Because of course Rush wouldn't actually be wishing suffering on those people “whose expectations for themselves are not very high.”

Where did all this come from? Limbaugh's warning Mitt Romney that he won't be able to win the election on jobs by continuing to point out the high unemployment rate. And not because Romney's personal record is one of slashing and burning jobs wherever he went. No, Limbaugh thinks that unemployment is still high because those unemployed folks are being coddled with food stamps and unemployment checks.

His evidence for this? Stories that retail sales are down because unemployment checks are running out, record numbers depending on Supplemental Nutrition Assistance Program benefits (SNAP, formerly food stamps), and the fact that the unemployed still have cars.

This is a variation, of course, on the age-old theme of right-wing populists like Limbaugh, who make their own (astronomically large) salaries by convincing their listeners that they're paying taxes solely to keep poor people in big-screen TVs and Cadillacs. In the '90s it was the “welfare queen,” now it's the long-term unemployed, coasting by on their benefits, perfectly happy never to work again. And of course, happy to vote for Barack Obama, the man who, in Limbaugh's twisted storyline, both wrecked their jobs and then gave them handouts so they could stay unemployed.

It's impressive that right-wingers manage to both blame “elites” like the president and the unemployed themselves for their circumstances, but that's exactly what they do. In any case, it's all the worst kind of propaganda in that it reduces the very real, deep and ongoing crisis in the U.S. to political point-scoring on the backs of the poor -- who, despite Limbaugh's bluster, are in fact feeling the pain acutely.

Let's look at some stories of the long-term unemployed, shall we?

"Every day is a struggle," J.R. Childress told Business Insider in February. The 53-year-old has been laid off twice since 2009, and at the time of the article had been unemployed for 10 months. "The struggle is the unknown. You've worked your way up the ladder and you get to a point in life and a position in work where you're comfortable ... then all of a sudden everything goes away. It's like being thrown into a hole and you're climbing to get up, but it's greased. There's no way of getting out."

Another long-term unemployed worker, Jerome Greene, has been out of work for three years—long enough to be one of those people who lost their benefits after 99 weeks of unemployment. "It's been like hell," he told Business Insider. "It's very hard to see people leave and go to work in the morning and come home every night. It's hard to see people spending money, going out and having fun and you can't. It's very stressing.”

To add to the crisis, those extended unemployment benefits that people like Greene rely on are running out. A new report from the National Employment Law Project points out that Congress' latest extension of federal unemployment benefits—the ones that take over when state funds run out, typically after 26 weeks—is set to expire at year's end. “[M]ore than 900,000 Americans will exhaust their state benefits during the first three months of 2013 and will be left without any jobless aid afterwards. In addition, more than two million Americans already receiving federal extended unemployment insurance will face immediate cut-off from the program in the week between Christmas and New Year’s,” the report reads.

Benefits paid already vary by state—from about $235 per week in Mississippi to a maximum of $939 in Massachusetts -- but most of them average around $400, and are calculated based on your prior income. (Oh, and they're taxed. Sorry, Rush, the unemployed are taxpayers, too.)

Beyond that, it's worth noting that the U.S. has some of the worst unemployment benefits in the industrialized world. According to the Organization for Economic Co-operation and Development (OECD), Sweden's unemployed get 28 months of unemployment at 75 percent of their previous income level; the French get 23 months and Germans get 12. In Belgium, there's no limit at all.

Further, of the 12.7 million currently unemployed, NELP reports, less than one in two are receiving any form of unemployment payments. Without the federal benefits, that number will fall to less than one in three.

One might assume that Limbaugh has some unemployed folks among his listeners; maybe he'll get some angry phone calls from people who want to let him know that yes, the unemployed are actually having a rough time. Until then, we'll close with one more message from one more out-of-work American who's busy not suffering enough to keep Rush Limbaugh happy:

"I hide my emotions, but deep down I feel I am dying off," Jeremy L., from Waupaca, Wisconsin wrote to Yahoo News. "I smile less. Friends don't call me anymore to do things because I can't afford to. I feel like a hermit living under a rock. I feel worthless. I feel like I'm pulling my girlfriend and daughter into a hole with me. Our once loving relationship has turned bitter and sour."

Sarah Jaffe is an associate editor at AlterNet, a rabblerouser and frequent Twitterer. You can follow her at @sarahljaffe.