How the games are changing London 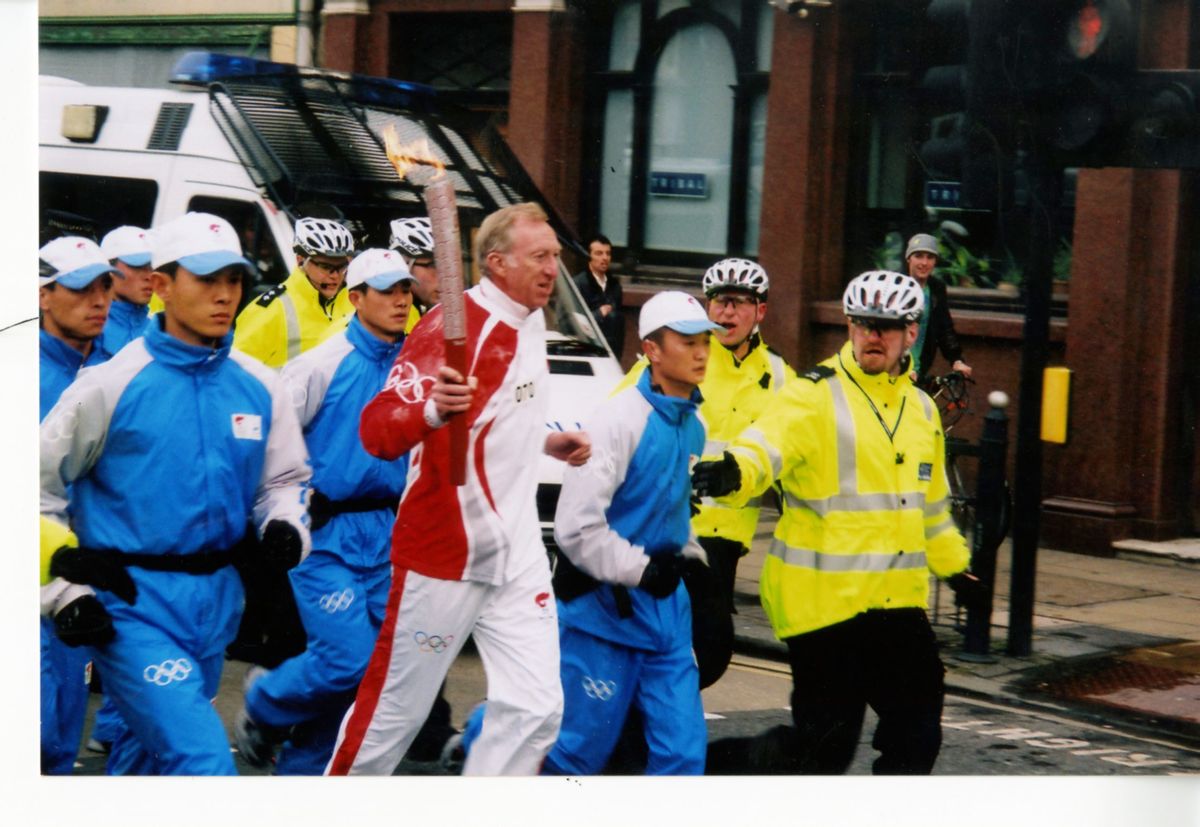 This article is an excerpt from the upcoming book "Ghost Milk: Recent Adventures Among the Future Ruins of London on the Eve of the Olympics," available July 17 from Faber & Faber.

On Sunday 6 April 2008, I set off to Stratford. We had been promised an Olympic taster,the procession of the torch through London. The elevated footpath is accessible through Wick Lane, as it passes beneath the A102. Here is the fault line where the virtual collides with the actual: a Second World War concrete pillbox, a stutter of built and half-built apartment blocks, a lock-keeper’s cottage converted into the set for a breakfast-time television show. Concrete-producing tubes cough and spew.

The blue of the perimeter fence is tactfully echoed by ribbons of fluttering plastic, convenience-store bags caught on razor wire. Beyond the fence is a sanctioned view of never-ceasing convoys, showered and scoured dunes of treated soil. Everything aspires to the grey-blue colour of drowned meat. White boxes have been attached to slender poles, but they are not cameras; further surveillance is unnecessary. The boxes are “Air Quality Monitors” produced at the Northwich Bus Centre by Turnkey Instruments Ltd. A contemporary version of the budgerigars taken down coal mines to provide advance warning of noxious gases. When the boxes begin to hum, it’s too late.

The new fences, with their pointillist panels, are beautiful as Japanese screens. The real Canary Wharf skyline, fading into spectral blue, is stitched on to a computer-generated Olympic Stadium. Which looks like a frozen smoke ring. A souvenir ashtray from Berlin in 1936. And good for nothing very much, after the event. Coca-Cola, McDonald’s, Visa, EDF, Samsung, Lloyds TSB, the National Lottery, the Department for Culture and Media, the mayor of London: they want their expensive tags sprayed on that shiny fence.

Along with multiples of that skateboarder logo for 2012. In shocking pink. Hundreds of thousands of pounds spent to mimic a street signature: a bubblegum swastika. Some aggrieved local has sprayed a response: a pox on the Olympics.

It’s a question of following the helicopters. I emerge on the A11 where a frenzy of indifference awaits the Olympic torch. Motorcycle out- riders in yellow jackets cover the side roads and form threatening lines, white-helmeted against the blue shutters of emerging tower blocks. A procession of police cyclists puffs up the hill, reluctant box-tickers for the eco-lobby. A scarlet open-top Coca-Cola bus—“Supporting the Olympics Since 1928”—waits for the action, somebody to enthuse. The low-loader, with its line of shivering Samsung cheerleaders in white tights and heavy blue mascara, blasts out a triumphalist chorus. The girls charm-assault motorists held back by cycle cops. They semaphore, dementedly, waving furry pompoms that look like Persian cats dipped in blue-dyed toilet cleaner. But the ultimate blue belongs to the shell suits of the phalanx of stone-faced Fu Manchu guards in baseball caps who protect the sacred flame as it wobbles towards us out of Stratford. Lord Coe refers to the torch-minders as “paramilitary thugs.” The Chinese ambassador insists that they are mild-mannered students, volunteers. The expected Lon- don mob is elsewhere, down the pub, or at home watching playbacks of the mayhem that attended the flame on its faltering progress across the city, on and off buses, under constant attack from kamikaze cyclists.

Two or three mobile phones are raised in tribute from behind a steel sculpture that resembles a dynamited palm tree. A Chinese gentleman from the takeaway waves a tiny red flag. Poor David Hemery, the 400-metre-hurdles champion from Mexico City, is obliterated by his protectors. The torch is a cone of flaming banknotes, a brand to light a witch’s bonfire. Black-clad APS Crowd Safety operatives with shaven heads, and thuggish joggers in acid-drop cycle helmets, shoulder-charge a solitary Free Tibet banner-waver. Smashing him backwards into the Gala Club bingo hall. Members of the security services, with cameras registering dissidents, outnumber the embedded television crews in their blast-resistant trucks.

When, a few days later, I return to Stratford, a city-state with a population “the size of Leeds,” it seems that nobody has given them the news of their status as a post-Olympic jewel. The Rex Cinema is defunct. The main road difficult to cross and vandalized by public art. The Labour Party offices are boarded up. The library is operative: it features a scale model of the coming Stratford City tended by legacy fundamentalists, sharp suits pouncing like Mormons on casual observers.

“Is there anything you’d like explained?” I back off, instinctively, in the English fashion. “How did you get away with it?” doesn’t need asking. Here, in essence, is the solution to the Olympic mystery, the enigma hidden behind the smokescreen of upbeat PR, websites, viewing days, junk-mail publications, and professional obfuscation. Stratford City will be “the largest retail-led mixed regeneration in the UK.” In other words: a shopping mall. With satellite housing we must call, for convenience, the Athletes’ Village. But the heart of it, the land swallower, is a gigantic mall conceived and delivered by the Westfield Group, which is controlled by Frank Low, the second- richest man in Australia. Westfield is the fourth-biggest shopping-centre developer in the world. It has assets of £30 billion. A last-minute deal was struck for it to take control of the 180-acre Stratford site, for which privilege it paid £180 million.

The brothers David and Simon Reuben, who held a 50 percent stake, were put under some pressure to sell out. Ken Livingstone, with characteristic tact, invited the Indian-born siblings to “go back to Iran and see if you can do any better under the ayatollahs.” City Hall and the various Olympic quangos prefer to deal with a single monolithic entity. Westfield would also take on the White City shopping mall (a traffic island separating the Westway and Shepherd’s Bush). Planning permission has been given to Westfield for 13 million square feet of “mixed use” development, with the Olympic Village being converted into housing after the Games. The word on the street being that if no- body can be persuaded to take up residence in this reclaimed wilderness, the tower blocks (generic and architecturally undistinguished) will serve as holding pens for asylum seekers and economic migrants, until they can be shunted back through the conveniently sited Channel Tunnel link.

In the gold-rush land grab of flexible futures—hyper-mosques, evangelical cathedral-warehouses it’s like reading the will and sharing the spoils before the sick man is actually dead. “The legacy the Games leave is as important as the sporting memories,” said Tony Blair. And the legacy is: loss, CGI visions injected straight into the eyeball, lasting shame. We have waved this disaster through, we have colluded: dozens of artists roam the perimeter fence soliciting Arts Council funding to underwrite their protests. It’s so awful, such a manifest horror, we can’t believe our luck. All those tragic meetings in packed cafés, the little movies. Blizzards of digital imagery recording edgeland signs clinging to mesh fences alongside compulsory-purchase notifications: we buy gold, we sell boxes. Gold from the teeth of dying industries, cardboard boxes to bury murdered aspirations.

Excerpted from "Ghost Milk: Recent Adventures Among the Future Ruins of London on the Eve of the Olympics" by Iain Sinclair, to be published this month by Faber and Faber, Inc., an affiliate of Farrar, Straus and Giroux, LLC. Copyright © 2011 by Iain Sinclair. All rights reserved.

Iain Sinclair is the author of many books, including Downriver, Lights Out for the Territory, London Orbital, and Hackney, That Rose-Red Empire. He lives in Hackney, East London.