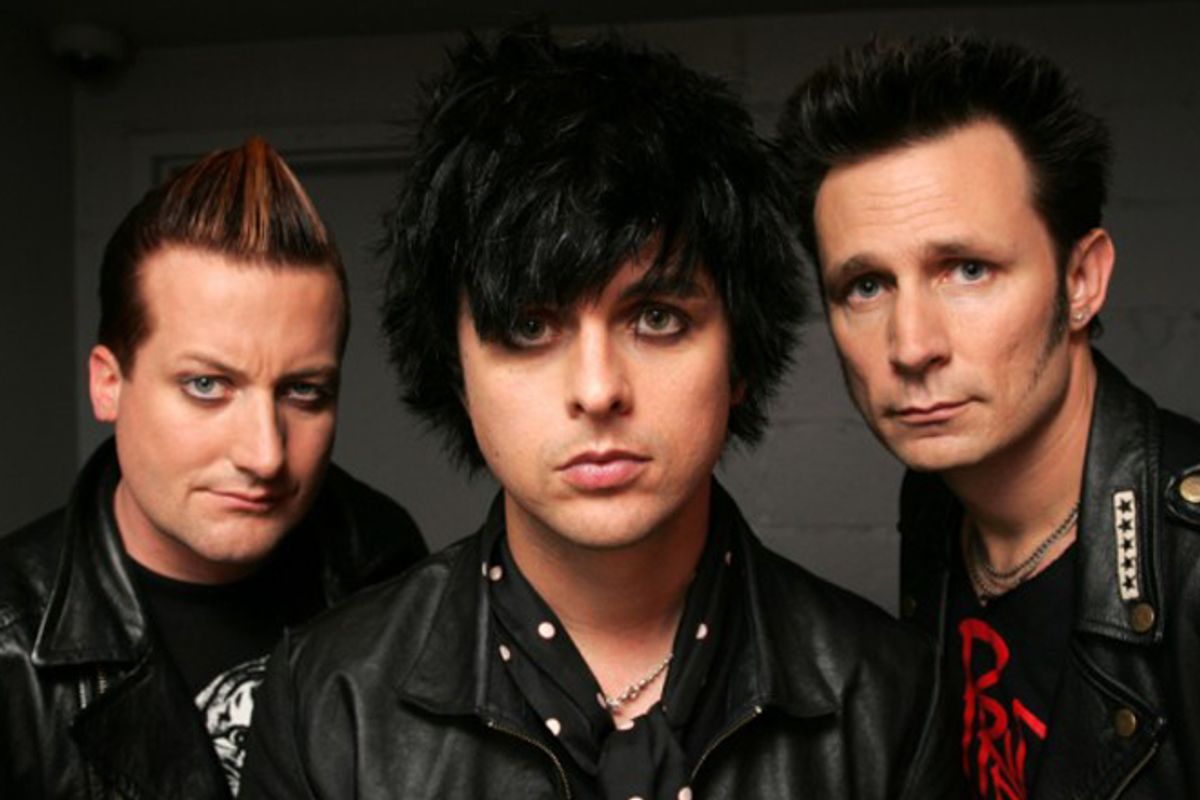 In what may constitute the biggest music news of the month, Green Day unveiled a new single, “Oh Love,” this morning, in the form of a 3-D lyric video. It’s the first new material from the band in three years, and it represents no great departure: The guitars still crackle, the drums still fill the empty spaces, and the production still sounds studiously antiseptic. There are a few fresh hints of '70s rock (think Boston or a less vocoded ELO) and perhaps a tinge of Celtic rock (think Dropkick Murphys on the chorus), but more than either of those influences, however, “Oh Love” sounds like it’s trying to serve the same function as “We Are Young” by Fun. This is music for a night out with friends, heraldic and triumphant and legendary — a rallying cry for youth. While Fun describe the scene with an almost anthropological eye, however, “Oh Love” is lyrically vague and musically anonymous. It’s not easy for any artist to write a song that is simultaneously anthemic and inconsequential, but Green Day have done just that.

“Oh Love” is the first volley in what looks to be a sustained attack by Green Day. Instead of releasing just one new album, the Bay Area band is releasing three connected full-lengths in five months: “¡Uno!” arrives in September, “¡Dos!” in November, and “¡Tré” in January. Such an undertaking seems ambitious — not to mention more than a little self-regarding, as though the material is just too good to edit down to a more digestible tracklist. There’s certainly a stunt quality to what is essentially a serialized triple album, although triple albums in any form and from any act tend to be too much of a mediocre thing (see, for reference, the Clash’s “Sandanista!”). But these three releases nevertheless represent a very traditional way of thinking about albums, one that equates the size of the tracklist with the immensity of the statement.

This sort of more-is-more approach is pure old-school corporate-rock folly, which is something that has been increasingly associated with Green Day over the years. They bear the burden of so much rock star baggage: that they are the last great rock band, that they are saving major-label rock, that rock is still the prime format rather than a niche market. Frontman Billie Joe Armstrong has embraced these ideas as fact, which is both wise and foolish. Wise because it has proved an incredibly useful marketing strategy, making them arguably the biggest band in the world (although not the biggest pop artist, which is a very different category). Foolish because there’s no way any band at any commercial or creative level could live up to those expectations. No one is saving rock, because rock doesn’t need saving. Rock is adapting, as it ever does.

By trying to make Rock That Matters — a dubious idea Green Day’s generation has inherited from the boomers — Armstrong and company have lately made rock without its edges, punk-derived music that has been flattened into something that replaces big ideas with mere nods to big ideas. Perhaps “¡Uno!” through “¡Tré!” will actually have something to say. Perhaps the material will warrant the strange release strategy, but it’s hard not to think that perhaps Green Day are trying to singlehandedly usher the album into obsolescence.

It wasn’t always this way. When Green Day formed in the late 1980s, they were brash suburban teenage skate punks who made their first recordings before they were old enough to vote. By the time they released their major-label debut, 1994’s “Dookie,” they sounded like a much-needed corrective to the self-seriousness of grunge, a similarly punk-descended form that too often viewed the medium as a form of therapy and catharsis. Especially in the wake of a whole movement motivated by angst, Green Day’s songs about masturbation, boredom and prescription drugs sounded even sharper, funnier, more cathartic — extroverted rather than introverted. Although it couldn’t offer the same sense of pop-cultural rebellion than had benefited grunge, “Dookie” sold millions and made Green Day stars.

The band had a pretty good run through most of the 1990s, and even a lackluster follow-up, “Insomniac,” in 1995 couldn’t slow the band down. But every group has to grow up sometime. It can be an awkward transition for punks, especially considering that age and experience often dull the urgency and outrage that drive this type of music. Rare artists like the Ramones never grow up; even rarer artists like Sleater-Kinney manage to translate punk’s immediacy to adulthood without losing a beat. Green Day first signaled their approach to maturity in 1997 with “Good Riddance (Time of Your Life),” a coffeehouse-acoustic ballad that concealed a weak kiss-off (or perhaps a kiss-off that barely concealed mushy sentiment). Ballads are the first resort of newly serious artists, and it was almost inevitable that the song would score movie trailers and television shows. More than grunge before it or garage rock after it, Green Day helped make punk safe for the mainstream.

“Good Riddance” marks a turning point for the band, the moment when they pushed aside the antics of youth for the gravity of adulthood. But by disregarding songs about masturbation, Green Day made some of their most masturbatory music. In 2004, they released the concept album “American Idiot,” loosely based on the rock operas of The Who and Pink Floyd. The story, such as it is, starts with a character named Jesus of Suburbia, who… does something. Armstrong has never been big on narrative, so the specifics and the meanings are vague. It has something to do with the state of America, which sounds a little reactionary and perhaps condescending. But mostly it’s harmless — punk defanged and declawed — because mostly it’s empty, devoid of heart and humanity and anything resembling a big idea.

In retrospect, the success of “American Idiot” was due primarily to context: It was released during a contentious election year, during what seemed at the time like the darkest days of the W. administration. And perhaps Armstrong didn’t want to alienate fans by seeming too partisan. Even as the album gave the appearance of engagement with American culture and politics, the music itself was soft in its attacks, vague in its targets but disproportionately confident in its mission: both American and idiotic.

It was all too easy, then, to turn “American Idiot” into musical theater. Director Michael Mayer staged the album in 2009, reimagining it as “Rent” with a pre-existing libretto. The idea alone is baffling, and there was no way Mayer or Green Day could reconcile the middlebrow musical with the low-brow punk song. But the choreographed edginess of the production only revealed how empty the album was and how clueless the band was. Surely — hopefully — this is Green Day’s nadir; it’s certainly hard to imagine anything lower than a peppy dinner-theater production that makes Annie looks like Siouxsie Sioux and embeds them in the very same establishment they once rebelled against. If “American Idiot” the musical did one good thing, however, it inspired the hilarious video for “Bottled in Cork” by Ted Leo, one punk who has aged particularly well.

“American Idiot” is somehow still touring, but since that debacle, Green Day have released a lackluster follow-up — 2009’s “21st Century Breakdown,” with its rob-the-Banksy cover art — and not one but two live CD/DVD sets whose sole purpose seemed to be stimulating the holiday market. So now, even with new albums on the horizon and classic albums long behind them, the onetime upstarts, so full of spit and promise, have become arguably the worst band on earth — technically proficient but artistically vacant.

What rankles most, however, isn’t the music they’d made late in their career, but the complete lack of imagination they’ve shown as they’ve aged. No band has a script for how it will mature and develop; the possibilities are endless. Green Day, in other words, could have become anything. They certainly had the power and the money and the fans to sustain a career full of unexpected twists and turns and experiments and excursions. Instead, they’ve very faithfully followed the pre-set path that favors albums as major statements, maturation as introspection, import as a complete rejection of fun. Armstrong might have been a punk original; instead he’s fashioned himself after Bono. We already have one of those, and some would even say that’s too many. Maybe “¡Uno!” “¡Dos!” and “¡Tré!”will shift the narrative, reintroduce the concepts of sarcasm and melody to their music, and cast Green Day in a new light. But only the band itself is to blame for any wariness or caution with which a listener might greet the news of so much new material. The worst that could happen, of course, is we get three new musicals.